Portugal follows, where is the "confidence fairy"?

So finally, after months of speculation, and faced with spiralling borrowing costs, Portugal bows to pressure and follows Greece and Ireland in seeking an emergency financial bailout from the European Commission. It is being estimated that the country would need about 75 billion euros ($106.5 billion) in assistance and the conditions of the assistance is expected to be worked out soon.

The bailout became inevitable after the steep increases in Portugese borrowing costs in the past few weeks. 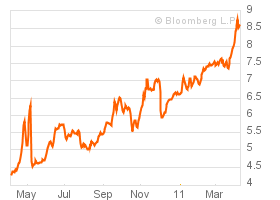 There have been repeated downgrades by credit-rating agencies (twice last month alone) which have sent yields on Portuguese government debt to their highest levels since the introduction of the euro. Last week Portugal sold 455 million euros (about $646 million) in one-year Treasury Bills at an average yield of 5.9%, up from 4.33% since mid-March. Similarly, the yield on 550 million euros of six-month bills was 5.12% compared to just 2.98% in an auction in early March. The emergency financing will ensure that Portugal can meet its 20 billion euros of borrowing requirements for the year.

Last May, the European Ministers agreed to provide 80 billion Euros to Greece over three years as part of a package in which the International Monetary Fund provided an additional 30 billion euros. Then, in November, they also agreed to a rescue package worth up to 85 billion euros for the Irish government. Further, last month, following Greece's adoption of extensive austerity measures, they also agreed to cut the interest rate charged Greece to help ease its debt burden. However, Ireland's refusal to accede to French and German requests to raise its low corporate tax rate of 12.5%, has meant that no such benefits have been given to Ireland.

The bailout will be arranged from the eurozone’s €440 billion rescue fund, the European Financial Stability Facility, which was set up last year to meet such contingencies. It is being hoped that the Portuguese bailout request may help reduce the risk of contagion to other countries, most notably Spain, by ring-fencing the euro’s three weaker economies.

However, if Greece and Ireland are any evidence, the standard European prescription of fiscal austerity to get the "confidence fairy" singing again and the economy back on the growth track appears not to be working. In a clear indication that its fiscal austerity was not doing much, the sovereign ratings of Greece, which was already downgraded to junk status, was again lowered by S&P to BB– from BB+.

Also, the cost of insuring debts and cost of borrowing has been rising unabated for both Ireland and Portugal despite the severe austerity measures and the emergency bailout package. In fact, as the graphic shows, after a brief drop in the immediate aftermath of the May 2010 bailout, the 10 year bonds have risen from about 7.25% to 12.75 today, while the CDS spreads have doubled, touching 1000 points. 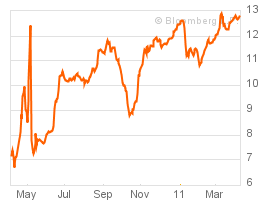 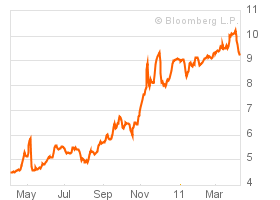 However, fears about Spain being the next in the domino to fall may be slightly exaggerated, atleast for now. Its CDS spreads have fallen dramatically since the beginning of the year and bond yields too have remained stable, albeit at a high 5-5.5% range.

Underlining its hawkish stance on inflation, in an unanimous decision, the European Central Bank (ECB) raised its benchmark policy rate to 1.25 percent from 1 percent. Inflation in the euro area rose at an annual rate of 2.6 percent in March, up from 2.2 percent in February and above the bank’s target of just under 2 percent. Since October 2008, the ECB had, in response to the sub-prime crisis and Great Recession, slashed rates from 4.25 percent to 1 percent by May 2009.

This is in contrast to the Federal Reserve, which continues to stimulate the American economy, as well as the Bank of England, which early this week left its benchmark interest rate at 0.5 percent despite higher inflation. In fact, like the $600 bn QE II in the US, the Bank of England too is continuing with its £200 billion ($325 billion) bond-purchase plan.

The rate increase could have dire consequences for Greece, Ireland and Portugal, where they are already having severe problems borrowing money at reasonable rates. More worryingly, the rate hike will also increase the pressure on Euro to appreciate, thereby weakening the competitiveness of European exporters.

This Economist article points to the fact that unlike Greece, Portugal does not have the problem of mountainous public debts or recklessly leveraged banks. Its problem is more structural - lack of competitiveness manifested in high input costs and excessive bureaucracy. It is inconceivable that austerity can do anything to overcome these problems.

The British austerity plan (aimed at lowering its budget deficit from a high 10% of GDP) appears to be having its predicted impact - retail sales plunged 3.5 percent in March, the sharpest monthly downturn in Britain in 15 years; a new report by the Center for Economic and Business Research forecasts that real household income will fall by 2 percent this year.

Portugal has accepted an international (EC, ECB and IMF) aid plan of 78 billion euros ($116 billion). Under the three-year plan, the deficit would need to be lowered to 5.9 percent of gross domestic product this year, 4.5 percent in 2012 and 3 percent in 2013. Last year, Greece secured a bailout package worth 110 billion euros and Ireland 85 billion euros.

Times chronicles how austerity is leading Portugal down the cliff. See also this Room for Debate on Portugal.
Posted by Urbanomics at 7:12 AM