The competitiveness mismatch in Europe

Paul Mason (via Paul Krugman) has an excellent graphic that captures one of the fundamental problem facing many peripheral economies of Europe - lack of competitiveness. 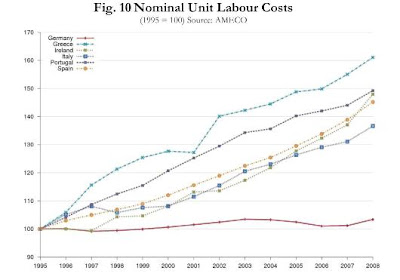 "There is a huge competitiveness mismatch and a resulting huge trade mismatch. The south became an export market for north-European manufactured goods, and a credit market for the north-European banks - which may have been technically constrained to be dour and presbyterian by domestic law but nevertheless piled into the Irish and Spanish property bonanza with gusto. Everybody benefited from the credit bubble; but Germany has above all benefited from the Eurozone's structural imbalance."

And The Economist is spot-on in its analysis of Portugal's problems,

"Portugal now joins Greece and Ireland in the euro zone’s intensive-care ward. Its public debts are nowhere near as monumental as Greece’s; its banks not as reckless as Ireland’s. It has succumbed because of a humdrum failure to rein in wage increases and to modernise a bureaucracy schooled in tallying the quiet remains of the first global empire, as well as an inability to coax upstanding family companies, which for centuries have crafted textiles, ceramics and shoes, into competing with the Chinese."

Fiscal austerity is not going to solve the competitiveness deficit, as Greece is finding out, through its three-year €110 billion ($155 billion) EU/IMF combined emergency bailout of May 2010,

"The real source of gloom is the shorter-term impact of austerity. A year ago the plan forecast that GDP would shrink by 4% in 2010 and 2.5% in 2011. Instead it fell by 4.5% last year and IOBE predicts it will decline by 3.2% in 2011. The unemployment rate has risen from 9% in mid-2009 to 14.2% in the last quarter of 2010, and is expected to average 15.5% this year... progress in cutting the deficit in 2010 was slower than envisaged. Provisional estimates put it at an oppressively high 10.6% of GDP rather than the original target of 8.1%. Debt is now close to 145% of GDP... Ten-year government-bond yields have climbed to almost 13%. The credit-rating agencies have recently downgraded Greek sovereign debt still further, from junk to junkier."

The solution, as Paul Krugman writes, is a combination of German inflation and Spanish deflation,

"During the eurobubble years, there were huge capital flows to peripheral economies, leading to a sharp rise in their costs relative to Germany. Now the bubble has burst, and one way or another those relative costs need to be brought back in line. But should that take place via German inflation or Spanish deflation? From a pan-European view, the answer is surely some of both — and given that deflation is always and everywhere very costly, the bulk of the adjustment should in fact take the form of rising wages in Germany rather than falling wages in Spain."

And amidst this gloom, hiking interest rates to ward off inflationary pressures is only going to amplify the woes,

"But what the ECB is in effect signaling is that no inflation in Germany will be tolerated, placing all of the burden of adjustment on deflation in the periphery. From the beginning, euroskeptics worried about one-size-fits-all monetary policy; but what we’re getting is worse: one-size-fits-one, Germany first and only. That’s a recipe for a prolonged, painful slump in the periphery; large defaults, almost surely; a great deal of bitterness; and a significantly increased probability of a euro crackup."

The European policy makers are clearly missing the woods for the trees. They fail to see the competitiveness mismatch and see inflation and lack of market confidence as the problems. Accordingly, their prescription is to raise interest rates and implement austerity measures to regain market confidence. Unfortunately, the first will merely widen the competitiveness mismatch while the second, from evidence of Ireland, UK, and Greece so far, will do little to bring back the "confidence fairy".

Paul Krugman makes another interesting point about how the sudden convergence of interest rates in the aftermath of the introduction of the Euro has contributed to the crisis. 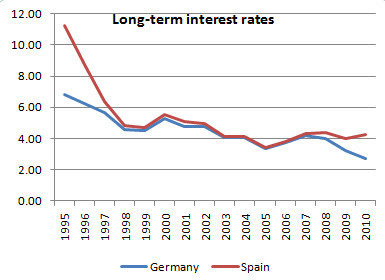 He writes that as the euro became a done deal, countries that had previously had to pay a large interest premium found themselves able to borrow on the same terms as Germany; this translated into a big fall in their cost of capital. The result was bubbles, inflation, and the crisis in the aftermath of the bubbles and inflation.

The graphic below captures the problems for the peripheral economies. Note the high external debt-GDP ratios and banking sector share of that debt.

Posted by Urbanomics at 7:00 AM