China and Europe stand at the two ends of the spectrum on manufacturing labor costs, and it reflects in their respective economic situations today. The US BLS editorial writes,

As measured in U.S. dollars, Chinese hourly labor compensation costs in manufacturing were roughly 4 percent of those in the United States and about 3 percent of those in the Euro Area in 2008. China's costs were roughly on par with those of some developing countries like the Philippines, but lagged noticeably behind those of other countries like Mexico and Brazil. Average hourly compensation costs in China were $1.36 in 2008. China's hourly compensation costs remain far below those of many of its East Asian neighbors like Japan ($27.80) and Taiwan ($8.68), but are roughly on par with those of others like the Philippines ($1.68)

The index of hourly compensation costs in manufacturing across countries and regions captures the competitiveness gap accurately. 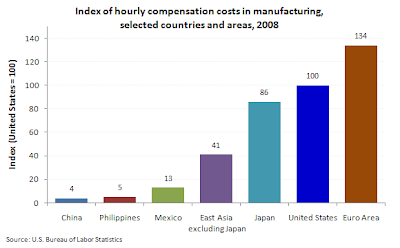 The main point is the fact that despite the recent increases, China's average hourly compensation continues to be more than 30 times less than that of Europe, whose labor costs boomed in the last decade and considerably eroded its economic competitiveness.
Posted by Urbanomics at 9:30 AM

Adding to the race to the bottom theory, that with lower wages and higher competition comes greater profits for the fat cats at the top. Thank God for unions.