The IS LM Model explained

The best way to revise a concept is to write about it! Paul Krugman has this description of the IS (investment-savings)-LM (liquidity preference-money supply) model that examines the interaction between the market for goods and services and the money market,

Let us analayze both models. Consider the loanable funds first. As interest rates fall (for whatever reason), investment increases, economy expands, and income levels increase. Atleast some portion of increased income will be saved, thereby expanding the savings pool available. A new interest rate equilibrium develops at this lower rate level between investment demand and savings available. The IS curve "determines a set of possible combinations of the interest rate and GDP, with lower rates corresponding to higher GDP" (therefore downward slope for the IS curve).

Now for the liquidity preference model. People make trade-offs (assuming the same risk, between returns and liquidity) when they take decisions to allocate their wealth between different investment and savings options (specifically between money and bonds). For a particular instrument, if its returns rise, people become willing to settle for lower liquidity. If the central bank wants to increase the money supply (cash balances with people), it must lower interest rates so as to induce people to increase their preference for liquidity.  The liquidity preference curve is thererefore downward sloping. 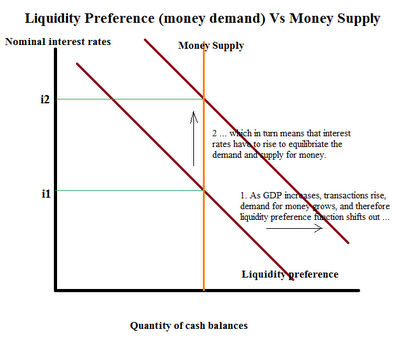 In the market for money supply (from central banks and passed on through commercial banks) and money demand (or liquidity preference), the former is vertical (in the short run, central banks can hold the money supply constant, even without changing the interest rate) while the latter is downward sloping. An increase in GDP, as indicated in the graphic above, will result in greater number of spending transactions, higher demand for money, and therefore a shift in the liquidity preference function outward. If the real money supply (supply adjusted for inflation) is held constant and the market has to equilibriate, the higher demand for money will have to be accompanied by an increase in interest rates. The LM curve, which is the set of all possible combinations of the interest rate and GDP where the money supply and demand matches, therefore slopes upward.

At the equilibrium of IS-LM graph, the loanable funds (goods/services market) and liquidity preference (money market) are in balance. Now let us examine the effects of fiscal and monetary policy on the economy by using the IS-LM model. Fiscal Policy first. Anything which causes a change in consumption, government spending, or investments, will shift the IS curve. A rise in Government investment spending, by increasing the demand for goods at the same interest rate, has the effect of pushing the IS curve to the right. This in turn increases the aggregate demand and therefore the GDP. However, interest rates have to increase so as to equilibriate between the loanable funds and liquidity preferences. 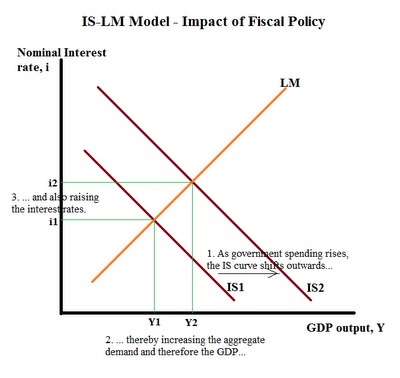 The classical economists refute this and argue that the resulting higher interest rates will eventually crowd-out private consumption and investment, thereby putting downward pressure on the growth of economic output. Further, the higher government spending will trigger inflationary pressures, which in turn will shift the LM curve inwards, thereby raising interest rates. These twin dangers, they contend, will invariably strangulate growth.

Similarly with monetary policy, as the money supply is increased, the LM curve shifts outward or downward. This in turn will lower interest rates, spur investments and consumption, and raise national income. 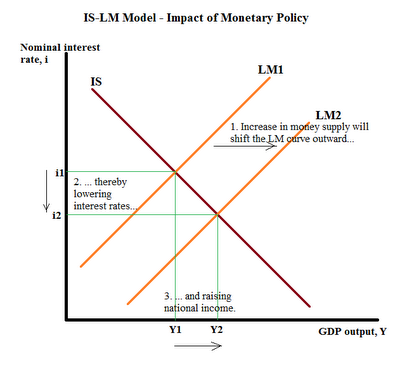 In both cases, exogenous shocks/events can lead to changes in liquidity preference and demand for savings, which in turn can shift the LM or IS curves respectively. However, in the long-run, prices/wages adjust to return the real money supply curve (and thereby the LM curve) backwards to its original position. It is therefore argued that the long-run impact of any change in monetary policy is minimal. But the fine print of the debate is about the magnitude of the adjustment in prices/wages and the time taken for this adjustment (or what constitutes long-term). Classicists claim that prices adjust quickly whereas Keynesians argue that prices are sticky.

Similarly, when the economy faces conditions like the present situation - frozen credit markets, reduced investment and consumption apetite, very high unemployment rate, and zero interest rate bound - many of the standard assumptions of classical economics breaks down. In the circumstances, government is the only agent with the ability to pull the economy. Further, since the economy is operating way below its potential output frontier, large pool of labour unemployed, and aggregate demand heavily constrained by lack of purchasing power, an increase in money supply is not going to lead to inflationary pressures. Also, at the zero-bound, since cash and bonds become interchangeable, at the margins, money is just being held as a store of value, and changes in the money supply have no effect. 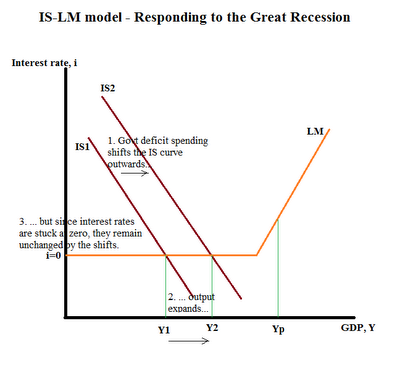 See this excellent presentation of the IS-LM model and also this nice description.
Posted by Urbanomics at 6:12 AM