The UNDP's India: Urban Poverty Report 2009 (summary here) has some interesting pointers, especially important in view of the critical role of urban areas in economic development and the growing concerns about increasing poverty in urban centers, "urbanization of poverty", as people migrate to cities in search of livelihood opportunities. It is also a re-affirmation of the economic value of rural to urban migration, despite the concerns among policy makers about such migration.

Urban poverty, unlike rural poverty, imposes considerable negative externalities on the society and economy. As the report points out, the urban poverty poses the problems of housing and shelter, water, sanitation, health, education, social security, and livelihoods along with special needs of vulnerable groups like women, children and aged people. Over-crowded slums, without access to these basic civic amenities and social welfare nets, and with constant uncertainty associated with evictions and loss of livelihoods, imposes conderable drags on the productivity and opportunities available to its residents besides constraining economic growth. It also fuels social evils like drugs and crime. The "lower levels of informal or traidtional support structures in urban locations for most poor households, the excessive monetization in urban areas as opposed to rural areas" magnifies the extent of these problems.

Some of the findings of the report are as follows

1. One of the most interesting findings of the survey is that "poverty levels in small size towns are high, in the middle size towns poverty levels are lower and is the lowest for large towns", thereby lending credence to theories that the metros and mega towns have been the engines of growth in recent years. It finds that the infrastructure facilities, quality of employment, productivity and returns to education are likely to be better in large cities than in small towns. And these in turn help these cities enter a cycle of positive feed-back, where growth feeds more growth. 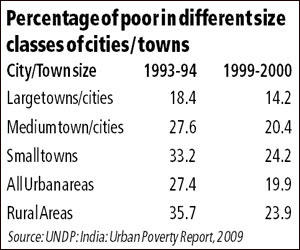 2. Migrants in cities are economically better off and are placed at higher economic stratum than the natives of cities on poverty indices. Rural migrants into urban areas have been found to have a lower probability of being poor than the local population, therefore making urbanization an important prong in the poverty reduction strategy.

4. Urban casual informal workers have been left behind in grabbing the growing urban employment opportunities as they don’t have adequate education and skills. The self-employed workers face specific problems of access to credit, markets and space and also incur various "hidden costs". The self-employed among the urban workers have shown higher poverty rates than the salaried but much lower than the casual workers.

5. The report also finds that the profile of the unorganized sector, while shrinking, has shifted from "casual employment (which is paid on a regular basis) to self employment (which carries its own uncertainties)". The findings of the report squares up with the concerns raised by people like IMF's Martin Ravallion, who while arguing that urbanization is a generally positive factor in overall poverty reduction, had cautioned that poor are urbanizing faster than the population as a whole, thereby reflecting in a lower pace of poverty reduction in urban areas.

(HT: Financial Express)
Posted by Urbanomics at 9:48 AM