The electricity crisis in California at the turn of the century, characterized by high prices and rolling blackouts, and arising from un-restrained de-regulation (headlong plunge towards deregulation), has many lessons for policy making in electricity sector. With India embarking on an ambitious program of reforms in power sector to expand generation capacity and improve quality of supply, it is imperative that these lessons are closely borne in mind. However, recent trends in power sector reforms in the country raises cause for serious concern since in many respects, we may be following much the same path traversed by California in the lead-up to its disastrous climax in 2000.

An investigation into the crisis by the US federal Electricity Regulatory Commission (FERC), revealed that "supply-demand imbalance, flawed market design and inconsistent rules had made possible significant market manipulation... Electricity prices in California’s spot markets were affected by economic withholding and inflated price bidding, in violation of tariff anti-gaming provisions".

The Financial Express reports that the Prime Minister's Committee on "open access" (direct sales by generators to end-users through the existing transmission and distribution network on payment of open access fees) in power sector is contemplating making it compulsory for generators to sell atleast 3% of their total capacities through open access system. Such a mandatory provision opens up the very real possibility of cherry picking, as generators seek to enter PPAs directly with large industrial consumers, thereby robbing state distribution utilities of those their cross-subsidy sources. 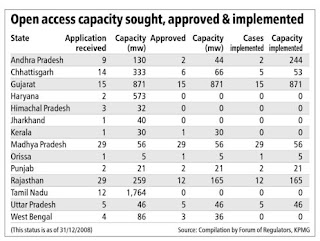 Any proposal for making "open access" mandatory comes in the wake of similar short-sighted policies in generation and trading. The policy on merchant power plants had liberalized the norms on third party sales by Independent Power Producers (IPPs) entering into Power Purchase Agreements (PPAs) with distribution utilities, thereby opening up the doors for them to sell a bigger share of their generation in the spot market and through the newly formed power trading exchanges.

Unlike conventional rate-based power plants, whose sales are governed by long term Power Purchase Agreements (PPAs), merchant power plants are free to sell their generation to anyone anywhere. Setting up a merchant plant would necessarily mean balance sheet financing by the developer, as financial institutions and lenders may not be comfortable with projects that don’t have long-term PPAs.

Given the inability of generation to keep pace with galloping demand, severe peak power shortages are likely to remain a constant feature for the foreseeable future. The cost of peak power purchases, in the form of excess drawals over the allocation and at lower frequencies (other-wise called Unscheduled Interchange, UI), arrived at on an Availability Based Tariff (ABT) regime, today ranges from Rs 7 to Rs 10 per unit and even goes beyond this at certain times. In the circumstances, private generators can set up base-load and peaking plants, and make handsome profits by selling even a small share of the generation or running them for only a few peak hours. This opens up the possibility of private IPPs (and even state owned generating utilities, like the WBSEB) gaming the system by taking advantage of the peak shortages and exorbitant UI costs.

The most shocking example of such gaming is the case of Chattisgarh, where the State Government allocated coal blocks and entered into PPA with developers. The PPA committed the pithead developer to sell about 10% of production, based on the limited state demand, at a basement bargain price (less than a rupee) to the State and export the remaining using "open access" facility for spot sales through the exchanges.

It was hoped that the emergence of an active power trading market with an enabling open access framework, would go a long way towards ensuring more efficient allocation of electricity across competing consumers. However, in the context of peak shortages, and limited number of traders and tradeable power, power trading exchanges have only exacerbated the crisis and increased the burden on state power utilities. Peak power prices have shot up dramatically, with the UI charges touching Rs 10 and beyond. The distortions have become so grave that even some state power utilities are selling their low-cost power allocation from Central Generating Stations (CGS) and off-peak low cost purchases, at a huge profit to power-deficit states and private traders. The margins available are so large that some of the private traders have in turn intermediated this to deficit states at even higher prices.

All these reforms - mandatory open access, merchant power plants, and power trading - have had the effect of driving up the power purchase costs and opening up private profiteering opportunities at the cost of public resources. In many respects, this is a journey down the infamous path of the Californian electricity de-regulation, where the market liberalization proceeded far in excess of what was healthy and sustainable for the market.

A free-market pre-supposes competition and choice on both sell and buy sides, market depth and breadth, and an enabling regulatory framework that polices anticipated market failures. In an ideal world, scarce resources can be most efficiently allocated by a free-market based on price signals. In an ideal world trading permits movement of power from surplus to deficit areas, and benefits consumers everywhere. But we live in a real world, where governments find it politically suicidal to increase tariffs so as to permit anything close to cost recovery, nor do they have the resources to reimburse the massive costs incurred. The head-long plunge towards de-regulation in electricity has overlooked these pre-requisites and realities.

There are a limited number of traders, volume of traded power is meager, regulatory architecture is inadequate and flimsy, conflicts of interest between generators and traders are rife, demand is inelastic, and the supply-demand imbalance is considerable. We therefore have a liberalized free-market framework super-imposed on an extremely un-competitive and nascent market, a recipe for incentive distortions with catastrophic consequences. It is not possible to have a sustainable and efficient electricity market with a liberalized up-stream supply side and tightly regulated down-stream distribution side.

A market design where the wholesale prices are uncapped while retail prices are frozen by regulatory orders, especially in the context of demand-supply imbalance (in the aforementioned context), is bound to generate distortions that will ensure the ultimate collapse of the arrangement. As the experience of California shows, de-regulation will not only not reduce prices, but also open up ample scope for innovative gaming of the system to the detriment of public interest.

The absence of separate tariff policy for intra-state ABT on sales and purchases have had the effect of distorting the UI prices within states. The central and regional load despatch settlements take the state as a unit in the expectation that the states would in turn do the settlement on the discrepancies in the intra-state open access transactions between the different market participants within the state. espite clear instructions by the CERC, very few state governments have put in place a framework that governs intra-state ABT for UI transactions.

The absence of intra-state ABT for settlement of sales and drawals by open access generators and consumers, means that the additional costs incurred by the State as a whole by way of under-generation by such generators and over-drawal by such consumers, does not get passed on to them. These costs are in turn absorbed by the state distribution and transmission utilities.
Posted by Urbanomics at 6:34 AM