Most educated religious group in the US? 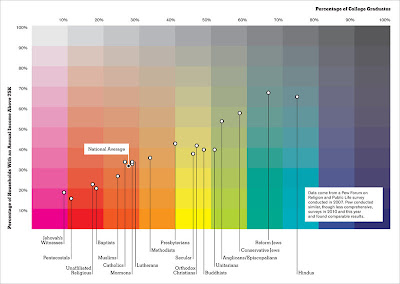 Interestingly, as David points out, the Protestants, who form the largest religious group in the US, are poorer than average and poorer than Catholics, thereby calling to question Max Weber's famous theory that Protestant nations are generally richer than Catholic nations.

I had blogged earlier about the fact that Hindus formed the richest religious group in the US.


Indian-Americans earn almost double the national figure (roughly $90,000 per year in median household income versus $50,000). Iranian-, Lebanese- and Chinese-Americans are also top-earners. In the last 30 years, Mormons have become leaders of corporate America, holding top positions in many of America’s most recognizable companies... Although Jews make up only about 2 percent of the United States’ adult population, they account for a third of the current Supreme Court; over two-thirds of Tony Award-winning lyricists and composers; and about a third of American Nobel laureates.

The remarkable rise of Asian immigrants is captured by this anecdote,


Take New York City’s selective public high schools like Stuyvesant and Bronx Science, which are major Ivy League feeders. For the 2013 school year, Stuyvesant High School offered admission, based solely on a standardized entrance exam, to nine black students, 24 Hispanics, 177 whites and 620 Asians. Among the Asians of Chinese origin, many are the children of restaurant workers and other working-class immigrants.

Posted by Urbanomics at 8:14 AM