How the rich and poor benefit from government

I had blogged yesterday on the critical role played by governments in the effective functioning of free markets. I also pointed out that despite being more critical of governments than the poor, the rich benefit disproportionately from government and its activities.

Here is a Venn diagram that captures the relative shares of rich and poor in both private and public provisions of physical infrastructure and rule of law. 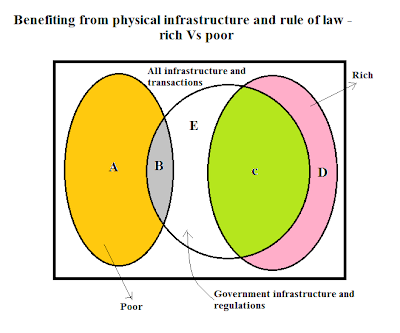 So, despite the very evident benefits that the rich derive from the role of governments, why are they and the middle class the most vocal critics of governments? Why do they want to down-size the very agency whose activities underpin their own success? There are obviously many reasons, ideological and non-ideological. However, I have three fundamental explanations that come to mind

1. There are a few related cognitive biases at play here. Human blindness to availability bias means that they easily recall the high-profile failures of governments (and there are no dearth of such ones) while over-looking the several government-driven provisions that are taken for granted. Their vulnerability to representativeness bias means that they over-estimate the probability of government failures instead of using a Bayesian calculation to weigh the relative successes (or benefits) and failures (or losses) of governments.

2. On a more material dimension, human beings naturally prefer to partake of benefits without having to pay for it. Public provision of physical and social-economic infrastructure is expensive and requires that people pay substantial taxes. Who likes to pay taxes? It must be one of those rare things which though everyone dislikes, is essential to maintain a functional society and economy.

3. People find government a convenient "other" that can be blamed for everything that is wrong with the economy and society. Government (by implication politicians and officials) is responsible for corruption, inefficiency, poor quality of service delivery, poverty and under-development, deficient infrastructure. Though the blame is richly deserved, it is not their exclusive preserve. It should be apportioned among the larger society itself, its populist opinion makers, our own disinclination to pay taxes, free-ride on public infrastructure, and so on.
Posted by Urbanomics at 6:57 AM

Those are some interesting findings and insights! However, it would help me as a reader if you are willing to provide some more information on the following:

1.) With regard to the Venn diagram you reproduced-

i.) Could you please identify the population (country, city, etc) used by the study? This is important to know since if it was not based on India, then how apt is it to extrapolate from that study?
If it is based on India then having a look at, for example, the Lorenz curve is a proof enough that the distribution of wealth is very unequal. The dichotomy of rich and poor is slightly confusing, is "poor" the poorest 10%, 20% or 30%? The same logic goes true for the rich.

ii.) What variables were used to approximate "rule of law"? Also, what kind of infrastructure are we talking about- public hospitals, public schools,roads and highways?
This needs to be qualified in the context of this statement- "The rich rely on the governments to provide a major share (C) of both these - physical and social/economic - infrastructure. The rely on private provisioning only where governments fail."

This doesn't hold true for a physical infrastructure like a Public hospital/school in a city. How many rich people do we see frequenting these public service points?
When we talk about roads and highways; these are common public goods by nature,and are non-excludable.

2.) "despite the very evident benefits that the rich derive from the role of governments, why are they and the middle class the most vocal critics of governments? "

There is a distinction you strike between "they" and the "middle class". An explanation in economic terms would help in making better association.

"Why do they want to down-size the very agency whose activities underpin their own success? "

What is the mechanism through which 'they' try to downsize the agency? Is there any empirical evidence of them being successful in doing the same? Also, how was the correlation between existence(not their state, efficiency) of public provisions and 'success' of the 'rich' established?

If you were referring to the use of media to criticize the government then it would be worth asking- who OWNS the media? Do those people have any vested interests? Are they in any way representative of the 'middle class'?

thanks Mr Sharma for your comments. i am sorry to have given you the impression that it was based on any study. i had made the diagram on an intuitive basis. however, it could be interesting if someone could do such a study, though it would require some fairly rigorous data collection.

and i had made the contrast between the general rich and the poor, leaving the rest in the middle. note the unclaimed areas in both the circle (government provision) and the square (all providers), which belong to that share of the services used by those in the middle. many of the assumptions and detail underlying this post are available in my earlier posts. for eg, see this

forget the public school or hospital, they cost peanuts compared to the major infrastructure. A single expressway or say an airport or a power plant (and we get continous three phase supply, whereas those in rural areas and even the poor in urban areas, get intermittent single phase supply of poor quality) or a port or a metro, all of which disproportionately benefit the non-poor, would be enough to cover the entire education and health care budget in the same city for many years! we could just tally the numbers and it would be evident. now that you have raised it (i did think that it was obvious), i will try doing this for hyderabad in a coming post.

even our municipal sewerage or water line - how many slums actually have these. even if they have, it is serviced much poorly than the areas where the rich reside.

anyways, the broad point i was trying to make is this - the non-poor benefit disproportionately from government provision of physical and other infrastructure. this is because

2. the poor are more likely to use the provisions of the parallel economy, unlike the rich (just take municipal services in slums and non-slums - you will find that leave alone quality, certain services do not even exist in these slums. so the poor rely on the alternative service providers - local leader who supplies water tanker for a price etc). even law and order is very weakly enforced in slums than in other areas!

will try to quantify this soon!

The governments in India turning blind-eye to tax compliance and failing to bring larger chunk of labor force into organized employment is a strategy the corrupt rulers of this country find it useful in stunting the citizens' desire for good governance or rule of law. All the wage earners have a certain level of willingness to pay taxes in exchange for the benefits and rule of law they are entitled to. To say that public is averse to paying taxes is trivial and ignores some ground realities and policies that state employs.

..
the rich benefit disproportionately from government and its activities ...

This is not bad at all, as long as poor somehow benefit from the government and its activities. To me current problem as only rich benefit. There is no trickle down effect.. or it too slow to show any visible impact.


Roads, PDS, education , defense, judiciary .... all require money and people are willing to pay taxes. If the delivery mechanism improves the feeling towards paying tax will improve.

The govt, however, must not wait for such a thing. It must start from exemplary punishments to tax evaders, as one major reason for not paying tax is the feeling some one gets same service without paying any/much tax.