Just as unemployment is the defining macroeconomic challenge of the era across developed economies like the US, persistently high inflation has assumed centerstage as the central economic policy challenge in India. Worryingly, inflation in India has been following a trend different from other emerging economies where, as the graphic below indicates, inflation rates have moderated. 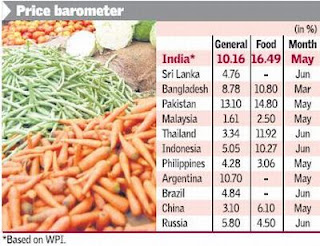 Standard explanations of India's inflation story has focussed mostly on foodgrain prices and specific supply and policy shocks. Besides conventional monetary policy responses, the immediate prescriptions to the problem have revolved around government buffer-stock operations, increasing imports and other efforts to increase foodgrain supplies. However, I have blogged earlier here and here that India's inflation story may be far more complex and go beyond these issues.

In this context, the RBI has used the occasion of its first quarter monetary policy review to expectedly hike the repo and reverse repo rates by 25 and 50 basis points, respectively, to soften persistent inflationary pressures in the economy. The fourth hike in the key policy rates in the current calendar year will increase the repo rate to 5.75% and reverse repo rate to 4.50%, while the CRR will remain at 6%. In a deficit liquidity mode, the repo rate under LAF (Liquidity Adjustment Facility) is the effective operating policy rate. See this and this excellent posts by Amol Agarwal.

The larger hike in the reverse repo rate was to narrow the corridor for short-term money market rates and thereby reduce interest rate volatility. Since the WPI-based inflation, recorded at 10.6% for June, has been in double-digits since February and was getting generalized across sectors, the RBI has raised the baseline projection for WPI inflation to 6% for FY 2011 from 5.5% earlier. Primary article (basically food, minerals and non-food crops) prices rose by 16.3% in June, fuels by 14.3% and manufactured goods by 6.7%.

In what is surely the most convincing analysis of India's stubbornly persistent inflation scenario I have come across, Arvind Subramanian draws attention to fundamental structural issues - overheating and cost-push inflation induced by rising land prices - that may satisfactorily explain India's inflation problem.

He does not subscribe to the standard explanations like weak monsoons and resultant fall in agriculture production or policy-shocks like fuel price and MSP hikes. He also doubts the utility of conventional monetary policy tools in addressing this inflation challenge.

Instead he feels that "the economy’s current growth rate of 7-8 per cent is above its potential or trend growth rate" and is causing the economy to overheat. Exacerbating the problem is weak agriculture productivity growth and increased purchasing power due to programs like NREGS. In particular, the unintended stimulative impact of NREGS on aggregate demand in rural India may be one of the under-appreciated contributors to inflationary pressures. He argues that the supply capacity of the economy is simply unable to match the demands on that capacity,

"We do not know for sure what the bottlenecks are in the rest of the economy. They could be inadequate investment in infrastructure, inadequate supplies of skilled labour (always a possibility in India because its growth model is so skills-reliant), slow total factor productivity growth or some combination of all the three."

In a recent article in the Economic Times, B Kapali raised much the same issue while pointing to the persistent underlying inflationary pressures in the Indian economy over the past decade,

"A wide range of goods, services and assets have experienced some of the sharpest price increases we have seen in recent memory. Very high inflationary pressures have been built into the overall macro economy in the past 7 or 8 years even as real growth shifted into a higher gear. Between 2000 and 2010, while real GDP rose 100%, nominal GDP increased 260%. This indicates that prices have risen close to 300% in this period — a CAGR of nearly 12%. (This is the price level increase in overall GDP including services)...

After a decade of rapid output growth but equally rapid (or even larger) increases in prices, the basic questions (going beyond the tyranny of the present) are: what is the Indian economy’s potential growth rate? Has monetary policy been too accommodative in the past 10 years in relation to the level of potential output?"

The other causal factor mentioned by Arvind Subramanian is the increased activity in the real estate market on the back of strong economic recovery. The resultant surge in capital inflows into real estate and housing has led to sudden increases in the price of land and related inputs, raising the cost of production in the economy as a whole. He writes,

"A whole range of services, such as retail, construction, entertainment, education and finance — which account for progressively larger shares of the economy — use significant amounts of land as an input, a fact that gets overlooked in inflation discussions, which tend to focus on agriculture and manufacturing... Generalised cost-push inflation could then be a natural consequence with the push resulting from the interaction between a pre-existing microeconomic distortion and a macroeconomic factor that serves to aggravate this distortion, converting a price-level effect into an inflation effect."

He proposes taking immediate steps to eliminate the land market distortions and dampening credit flows, both external and domestic, into the real estate sector. This would help contain the real-estate driven cost-push inflation pressures. While it may be possible to take immediate steps to address this challenge more effectively, the expansion of the production possibility frontier of the economy would surely take time.

Neither of these causes can be directly addressed with standard monetary policy tools and would require resolving more fundamental structural challenges being faced by the Indian economy. In other words, the persistently large inflation is the most immediate and salient question mark on India's ability to sustain near double digit rates of economic growth. Does this also mean that Indian economy looks will face consistently high inflation rates alongside high economic growth rates for atleast the foreseeable future?

Niranjan has this op-ed pointing to the over-heating story.
Posted by Urbanomics at 1:33 AM

There seem to be a host of guesses on the causes of inflation and a further range of explanations from the governments that inflation is very much under control. Also the steps being taken/not taken do not seem to be having any beneficial influence for society.

Firstly, governments probably need to sensitize themselves on the difficult circumstances that inflation creates, especially for the poor. It is necessary to understand the causes a little better and see if any do-able steps can be indicated.

Usually, by the time the discourse leads to conclusions, the phenomenon has passed along and another round of dissections start.

RBI also expects a GDP growth rate of 8.50% for the fiscal year 2010-11, thus revising its earlier forecast of 8.00%, as revealed in April 2010 monetary policy review. This upward revision was made after factoring progress of monsoon and the prevailing global macroeconomic scenario.

I am not sure whether they are guesses. it cannot be denied that all the commonly cited explanations - weak monsoons, overheating, policy-shocks, inadequate imports, slow government response etc - have some role in the inflation story.

the challenge lies in identifying the relative importance, to reasonable approximation, of each factor. i am not sure whether we have the toolkits to isolate the relative contributions of each factor. till then, when faced with downturns governments and policymakers will be left with no option but to throw all options at the problem in the hope that atleast some of them will click and address the problem.