In an interesting experiment, drawing on insights from behavioral psychology, and whose outcome will be widely watched, New York city public health department has launched a program to grade all the 24000-odd restaurants across the city A, B or C on their respective cleanliness. 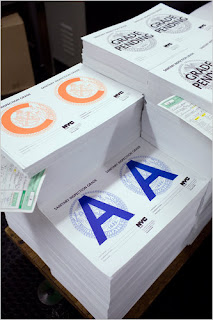 The officials hope that issuing restaurant letter grades will help consumers make informed choices about where to eat out and the resultant consumer awareness would create a powerful new incentive for restaurants to maintain the highest food safety standards. In the language of behavioural economics, the grading system, by generating public pressure, is expected to nudge the restaurants into improving their cleanliness.

Restaurateurs will be required to to post the 8-by-10-inch placards prominently on a front window, door or exterior wall within five feet of the main street entrance, from four to six feet in height. Failure to do so will be punishable by a $1,000 fine, with additional penalties for counterfeiting.

The ratings will be phased in, with only the A grade restaurants required to post their grades. Restaurants that receive a lower grade will automatically be inspected again at a later date and their grades reviewed, and if they are still unhappy with their grade, they have the right to seek an administrative hearing. A black-and-white "grade pending" sign will be posted in restaurants that are appealing their scores.

Incidentally a number-based grading system, based on points for violation of specified parameters, is already in place and the grades are displayed on the health and mental hygiene department website. Now the blue A card will correspond to 0 to 13 points under the old system, while the green B will designate a less sanitary 14 to 27 points, and an orange C will represent 28 points or more.

Inspections are unannounced and done atleast once a year. An inspector, equipped with hand-held computers to fill and calculate scores, examines the establishment’s sanitary conditions and then give the operator a printed report listing the violations observed, the points for each violation, and the total number of points.

Expectedly, the decision has evoked strong opposition from the restaurant owners and the New York State Restaurant Association has already sent a letter to some 3,500 eating establishments, rallying opposition and raising money for a possible legal challenge.

The challenge to replicating this experiment in countries like India would, apart from the political opposition it would invariably provoke, be in maintaining the purity/sanctity of the grading system. Though, to some extent more objective measures of hotel-cleanliness and food-safety can help address this problem, a large element of subjectivity will continue to remain. The likelihood of the administrative machinery being subverted to dilute the grading system will be very high.

A comparison of the supervisory bureaucracy in New York and a typical Indian city is instructive. In New York, the department is adding 23 more inspectors to its existing 157 to conduct annual visits that are now expected to rise by more than one-third, to 85,000 from 60,000. This translates to almost 130-150 restaurants for each inspector and 450-500 inspection visits each inspector in an year.

In comparison, a similarly large city like Delhi would have more than a lakh restaurants whose regulation is monitored by a handful of food inspectors. It becomes practically impossible for even a food inspector working exclusively on monitoring grading (they typically have a host of other activities) to just visit all the restaurants in his jurisdiction once a year.

An alternative would be to have grading agencies, similar to the ISO certification firms, who can be entrusted the task of evaluating restaurants on a few clearly defined parameters. While this too is vulnerable to being subverted, it stands a more realistic chance of succeeding than any government run certification and grading arrangement.
Posted by Urbanomics at 7:01 AM

Similar grading system of the Hotels has been started last year in Nagpur and almost all the restaurants display the grading certificate from the Municipal Corporation displayed prominently in the hotels.

Do we make decisions on restaurants based on any current system? No. We make our decisions by word of mouth.

This system of expenditure seems to be a very top level mechanism of favouritism. Obviously, such programs have been funded by sources who will be benefitted.

Implementing such a system in India will "not" lead the consumer to make any variation in his decisions. Additionally it is a burn on the exchequer.