Searching for origins of food inflation

The fast rising foodgrain prices (latest year-on-uear food inflation was 19.83%) has generated an intense debate about its origins and calls for immediate action to contain inflationary pressures. This blog has consistently argued that the increases in food prices has its roots in supply-side constraints, with global origins, and to that extent the government has limited options in effectively addressing it. 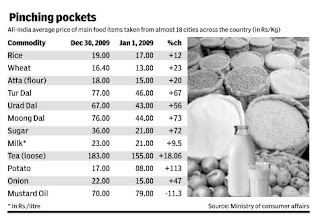 The loudest voices have been those calling for monetary policy interventions by way of raising interest rates and draining off the excess liquidity in the credit markets. However, this demand-pull explanation of inflation does not appear to be borne out by the subdued trend in the credit market and other broader demand side indicators. The only monetary intervention that can make any dent, however miniscule, can come from tightening of CRR requirements to mop up any excess liquidity that may have found its way into speculative activities.

The other bogeys have included speculative pressures exerted by the commodities futures markets, where too the evidence for such dramatic increases in food prices appears thin. The subsidy reasoning is a red-herring, in so far as without the price depressing effects of producer subsidies, the prices would have been even higher.

The other factors blamed include subsidies and the hikes in minimum support prices (MSP). It is arguable that the higher MSP (30% increase for paddy and 8% for wheat) may have contributed to the increase in price of some of the foodgrains, though its effect may be marginal. In any case, the MSP argument cannot explain the steeper rises in prices of vegetables and many pulses. As a Businessline report indicates, the market prices of all the commodities have borne no relation to the MSP in recent years. 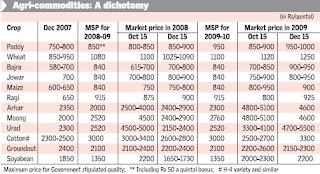 The more valid and relevant explantion for foodgrain prices may lie in specific supply-side factors, apart from the general impact of delayed and poor monsoon, that constrain supplies in the market for the particular food product. The case of potatoes, as superbly illustrated in this Mint op-ed, is an example and an indicator of the problems with other food commodities.

Potato output dropped from 30.5 mt in 2007-08 to 26 mt in 2008-09 and is expected to go further down this year. Potatoes are harvested in Jan-March period and stored in cold storages for supply over the year. Further, the go-downs are emptied every year in Nov-December to accommodate new crop arrivals, thereby triggering off a dip in prices during this time. However, the poor crop in 2009, due to a late blight infestation in West Bengal, meant that the stocks got depleted in the last quarter, driving up the prices. The delayed monsoon is likely to have an adverse impact on the output in the 2009-10 Kharif season. This was exacerbated by the base effect from the very low prices of late 2008 due to the bumper crop that year.

The upward pressure on potato prices was amplified by the fragmented post-harvest value chain, that characterizes most other food commodities, that "enables intermediaries to exploit production-induced scarcity". The article points out that roughly two-thirds of the potato price formation takes place after the harvest, and to this extent the farmers do not get a remunerative enough price for their produce and the major share of the final price gets captured as inefficiency rents. So much so that some of the major chain retailers, who source their products directly from farmers, are able to sell cheaper than the local cart vegetable vendor. Much the same dynamics has been responsible for keeping onion prices high despite any major supply-side shocks. The result of these inefficiencies is that both farmers and consumers are short-changed - farmer does not get a remunerative price for his produce and consumer suffers from high prices.

While there is little that the government can do to address such supply-shocks, with some political will and administrative effort the inefficiencies in the post-harvest value chain can be effectively addressed. The article writes,

Similar supply constraints arising from drought and delay in crushing due to price dispute has lowered sugar production by 9.6% and cane output by 8.8%. With production for 2009-10 estimated at 16 mt against demand of 23 mt, and global supply chain disrupted due to weather-related problems in Brazil, sugar prices are likely to remain high for the foreseeable future. Thanks to the poor harvest over the last two years, India has turned from a net exporter (production was 26.3 mt in 2007-08) to importer, which in turn has contributed towards driving up global sugar prices (sugar futures have rallied to the highest in nearly three decades). See also this post on the instability in global sugar prices.

The 23% deficit in the southwest monsoon for the season, described as one of the weakest monsoon in decades, is likely to mainfest in supply-side constraints in the first half of 2010, especially for crops like rice, groundnut and sugarcane. Its impact could be both in terms of decline in productivity and decrease in acreage (5.3%) for the Kharif season, and CMIE estimates the foodgrain production to fall by 16% to 98 mt from 117.7 mt in kharif 2008.

The government will also need to more pro-actively build up and manage its buffer stocks, which would demand more aggressive imports of many food commodities. Today, apart from the traditional rice (21.6 mt as on November 1, 2009) and wheat (26.8 mt), the buffer stocks in commodities like sugar remains thin. Sugar buffer at 2.4 mt as on October 2009 (as against 10.5 mt at the start of 2008-09) is adequate for only slightly more than a month's consumption, whereas a realistic requirement would be 6-8 mt, which in turn whould necessitate large imports. It may also be necessary to actively manage the buffer stocks in commodities other than wheat and rice, by carrying out open-market operations in them to modulate supply-demand mismatches. Addressing the problems in the PDS delivery chain should be the foremeost priority of state governments as they seek to cushion the poor and under-privileged from the adverse effects of these price shocks.

There are a few other non-interest rate monetary policy interventions that could release more supplies, especially those hoarded in go-downs in expectation of higher future profits. It is argued that an increase in margins on credit to food grain traders (outstanding credit to trade as at the end of the 2008-09 was Rs 1.44 lakh crore) and/or higher credit risk weightages for this category of borrowers, would push up the cost of carrying invetories and lead to the release of inventories and thereby improve supplies. Other measures include direct action to tighten inventory norms for a range of commodities, netting out supplier credits against inventories for determining the eligibility to bank credit. However, it is preferable that such steps be used only as last resort measures.

Disturbingly, the recent increases in food prices across the world may be part of a long term trend. The International Food Policy Research Institute (IFPRI) and the FAO have forecast sharp increases in food prices over the next fifty years due to factors related to climate change, and calls for substantial increases in investments in irrigation and research in improving yields. It is important that countries like India, which have seen continuous decline in agriculture investments since the successes of the Green Revolution, increase their investments in agricuture technology and irrigation. The IFPRI report predicts that additional price increases would be as much as 32-37% for rice, 52-55% for maize, 94-111% for wheat, and 11-14% for soyabean. 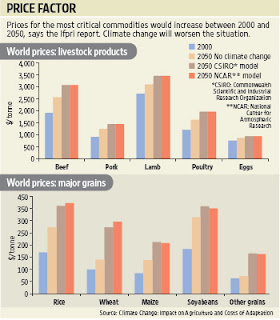 Posted by Urbanomics at 5:40 AM

On 'inflation in India', this could be the most informative and analytical post yet available on web.

India being one of the largest agrarian economy should have the capacity to mitigate the effects of food inflation on the it's vast vulnerable and poor section of the society. In 2008, the procurement of food grains was the highest in the history but the very next year inflation is the highest. A big irony.

The domestic supply chain mismanagement is largely responsible for the mess relative to global effects. This has rendered the monetary controls toothless. The loopholes in
supply chain must be plugged to save both farmers and consumers. Time has come to revamp the domestic system and eliminate middle men. Political courage and fortitude is the need of the hour to take such steps.