PSD blog draws attention to an article by Rebecca Wilder which highlights the need for India (and Brazil) to increase its savings rates in order to boost overall investment and, in turn, worker productivity. This assumes importance if India is to capitalize on its large, young, and rapidly growing (adding 13 m workers every year) workforce.

In an FT blog post, Shankar Acharya has argued that the restrictive labour laws (especially on hiring and firing them), and preferential treatment and reservations for small scale industries encourage Indian manufacturing units to "stay small". A multiplicity of labor laws (46 central and over 200 state labor laws) only adds to the problems of the businesses. Further, indirect tax regimes favoring the small enterprise have suppressed scale and encouraged firms to remain small.

Difficulty in accessing capital and poor infrastructure facilities - especially in access to transport, electricity and water - only exacerbates the problems. This prevents them from taking advantages of the classic industrial economies of scale and scope and also keeps productivity enhancing capital investments at a minimum. Further, many of these regulations and controls also disincentivizes businesses from coming into the formal sector and thereby avoid conforming to the restrictive regulations, especially on hiring labor.

It is therefore no surprise that the capital stock per worker is much lower for India (and Brazil) in comparison with China. Given its low productivity base, even incremental increases in investments will lead to dramatic improvements in productivity. 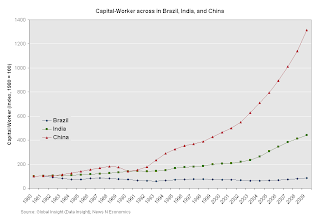 Though investment spending as a share of GDP has been growing... 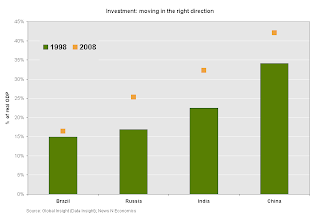 ... it is increasingly coming from the sharp rise in FDI inflows. 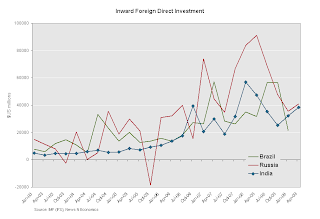 It is therefore important that India increase its domestic savings substantially, so as to boost capital investments and increase its capital stock, which would in turn increase labor productivity. 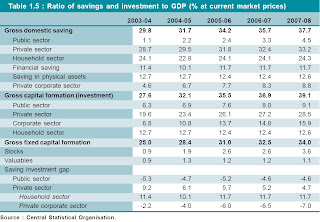 While there have been improvements, the household savings have been relatively stagnant for the past few years. In fact the increases in savings have been due to the increase in public sector savings, something which is likely to be adversely affected by the economic slowdown.
Posted by Urbanomics at 6:14 AM