The first ever formal press conference by a Fed Chairman was thought as an excellent opportunity to find out where the Fed's priorities lay. Which of the two - inflation or unemployment - did the Fed consider to be a greater evil?

Conservatives have been whipping up fears of an inflationary spiral, pointing to the dangers of the huge amounts of money from the two rounds of quantitative easing sloshing around. This coupled with the burgeoning public debt, they argue, is reason enough to indulge in austerity and fiscal contraction. In contrast, liberals point to the persistenly high unemployment rates, low inflation and the weak aggregate demand and have been advocating more expansionary policy, including a third round of quantitative easing. They point to the dismal latest economic growth figures and weak labour market conditions and claim that further austerity will contract the economy, increase the debt-to-GDP ratio, and drag the economy deeper into a recession.

So where does the Fed's sympathies lie? The Reuters have an excellent word cloud which conclusively highlights which direction the Fed is leaning towards. 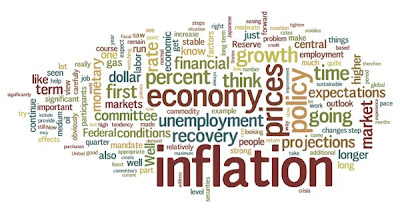 For the record, Bernanke said that inflation must take precedence over employment because inflation would result in job losses,

"While it is very, very important to help the economy create jobs and help to support the recovery, I think every central banker understands that keeping inflation low is absolutely essential to a successful economy, and we will do what we can to make sure that happens... The trade-offs are getting harder at this point. Inflation is getting higher. It’s not clear that we can get substantial improvements in payrolls without creating a considerable risk of a dangerous rise in inflation."

This, as Mark Thoma and others have pointed out, is baffling given that unemployment rate rules high and inflation is running below the Fed’s preferred range of 1.5 to 2.0 percent. It is all the more surprising since the Fed, by Bernanke's own admission, believes the expected rise in inflation, due to rising commodity prices, is only transitory. Mark Thoma is spot on in his assessment,

"The potential benefit of further policy moves by the Fed is higher growth and lower employment. The potential cost of more quantitative easing is inflation. So the decision on whether to provide more help to labor markets comes down to a comparison of the expected employment benefits to the expected inflation cost... none of the Fed’s forecasts show any long-run concern about inflation at all."

Chad Stone has an excellent graphic that captures the across the board drop in US economic growth in the first quarter of 2011 compared to the previous quarter. 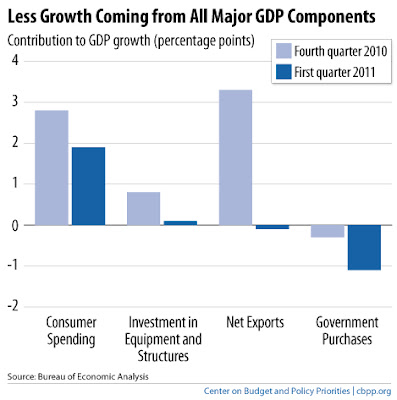 NYT editorial questions the real meaning of the modest reduction of unemployment rate in the US from 10.1% in late 2009 to 8.8% now. Over the last year, the number of new hires has been outstripped by the masses who have either given up looking for work or who have not undertaken a consistent job search, say, after graduating from high school or college. Those missing millions are not counted in the official jobless rate; if they were, unemployment today would be 9.8 percent.

Mohamed A. El-Erian points to a few other uncomfortable unemployment facts - much of the improvement in recent months (from 9.8% in November last year) is due to workers exiting the labor force, thus driving workforce participation to a multi-year low of 64.2%; if part-time workers eager to work full time are included, almost one in six workers in America are either under- or unemployed; more than six million workers have been unemployed for more than six months, and four million for over a year; unemployment among 16-19 year olds is at a staggering 24%.
Posted by Urbanomics at 6:57 AM