On the progressivity of tax exemptions

More posting on taxation! Most often, public debates on the progressivity of taxes is restricted to only the actual tax incidence and overlooks the impact of exclusions (or tax expenditures, as in the US). Exclusions are exemptions from payment at the regular taxation rates, provided to a preferred category of consumers and for meeting certain public policy goals.

There is nothing surprising about tax exclusions being regressive and favoring the more well-off. Tax exclusions are, as aforementioned, by definition, promulgated to benefit specific interest groups. Only those lobbyists representing powerful interest groups command the political influence to push through such exclusions. Once put in place, these exemptions assume the character of entitlements and are difficult to eliminate.

Consider two of the most high-profile examples from the US - income tax exclusion for employer-provided health insurance and mortgage interest deduction, provided with the objective of expanding the quality and quantity of health insurance coverage and home ownership respectively. Both have been found to be far more beneficial to those at the higher end of the income ladder. In fact, many of the exemptions are positively regressive - the same rate of taxation for everyone. And when these deductions are applied for essential and substantial consumption items with wide variations in quality like health care and home mortgages, those with higher incomes naturally benefit disproportionately.

In the US, employer provided health insurance, covers three-fifths of the population under age 65. Under the existing law, workers who obtain health insurance through an employer need not pay any taxes on the 'employer contribution' to the premium (which is mostly more than 75% of the total premium). In fact, this tax exclusion is the largest of any tax expenditures, more than double the next highest expense. Its inefficiencies and incentive distortions are widely documented. 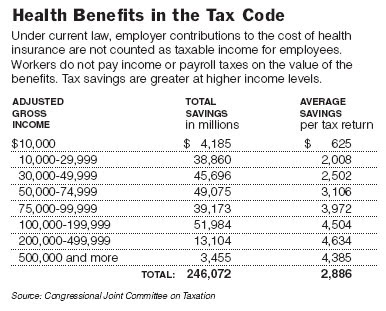 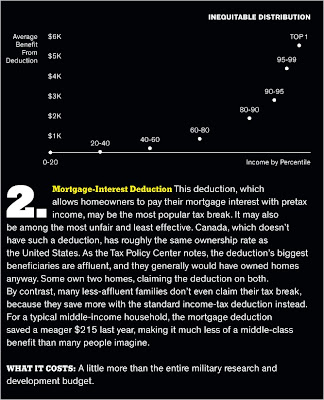 In both cases, there is a concomitant tax penalty on those who do not follow the regular route and avail health care and housing services. Since the tax exclusion does not apply to privately purchased health insurance packages, people not availing employer-sponsored benefits have to pay a substantial tax on their premiums. Similarly, people who prefer to rent a house, instead of trying to own one, have no deduction on any part of their rental expenditure.

As David Leonhardt has pointed out, tax expenditures cost the US federal government about $1.2 trillion in lost revenues last year, whereas the budget deficit itself was just $1.3 trillion. In 2010-11, the central government in India lost potential tax revenues worth a staggering Rs 5.7 lakh crore due to the various exemptions, concessions and rebates it gave. These concessions, also formed about 80% of the total tax expected to be collected in the period.