FT Beyondbrics points to the findings of a Credit Suisse report (pdf here) on global urbanization trends. The report has a very rich array of graphs and statistical correlations. It finds that on average, for every 5 percentage point increase in a country’s urban population there is an associated gain in per capita economic activity of 10%.

One of its most interesting findings is that countries hit a peak per capita GDP growth level between the 30-50% mark. Credit Suisse’s model suggests that as a country moves through a 40% urbanisation level it achieves peak real per capita GDP growth of close to 8% and that between 30 and 50%, an average 6% real GDP growth rate is achieved.

India, with slightly over 30% urbanization, is moving towards its sweet-spot growth rate range. China has been outlier, a positive one, in so far as its growth rate has been disporportionately higher at every level of urbanization. India's pace of urbanization, despite recent increases, will remain far lower than the rest of emerging world. In fact, the report estimates that among the major emerging economies, India will be the last to see urban population exceed rural population, not achieving it till 2044. 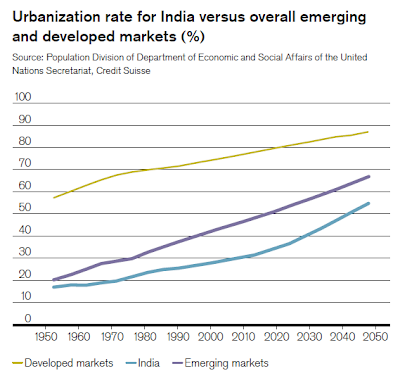 Posted by Urbanomics at 7:42 AM