Excellent graphics from the recently released IIHS report (pdf here) on Urban India 2011. If we take into account larger villages, half of India's population is already living in urban areas or in areas with similar conditions. 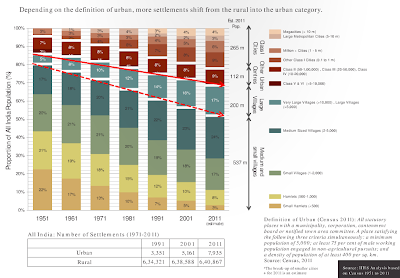 Contrary to conventional wisdom, natural urban gorwth and not migration from rural areas is the major cause of urban population growth. 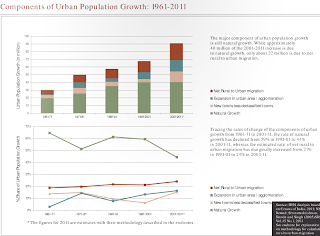 Despite the increasing importance of cities, urban development remains someway off from the mainstream development radar. The graphic below accurately captures the development priorities of governments in India. The Eleventh Plan (2007-12) allocation to various sectors reveals the low priority for urban development. 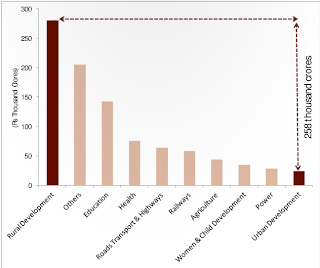 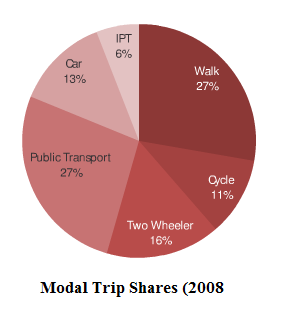 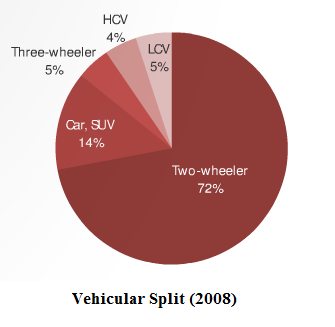 The High Powered Expert Committee (HPEC) appointed by the Planning Commission to estimate the financial requirements of cities has estimated that transportation requirements would form the major share of funds requirement for our cities in the 2012-31 period. However, the major focus of JNNURM has been on water supply and urban housing. In some sense, this is encouraging since it means that the funds requirement for providing the basic non-transport urban infrastructure - sewerage and water supply, solid waste management, and storm water drains - is a small share of the total estimated requirement. 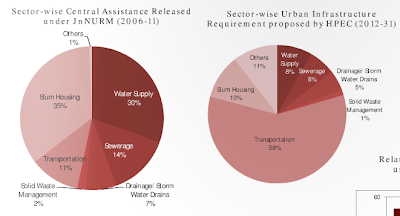 Excellent snapshot (click to enlarge) of the cornucopia of urban social safety programs. 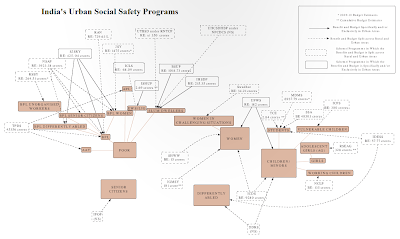 Despite the increased pace of urbanization over the past two decades, the share of informal employment as a share of total urban employment has remained stable in the 80% range. Jobs in trade and surprisingly, manufacturing, have been largely confined to the informal sector. 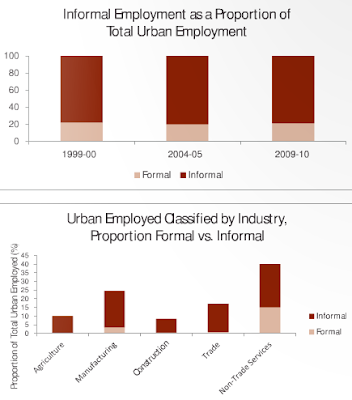 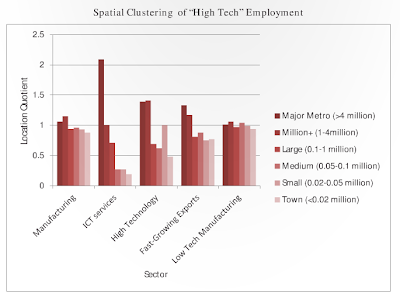 Posted by Urbanomics at 6:18 AM

Sir, I am Director Census Operations Delhi. The first graphic (for which there seem to be no notes in the back) doesn't fit in with Census data at all even though the Census definition for Urban areas has been used for it. It is also not clear why the data used for 2011 is called an estimate, and where the estimate has come from; the actual Provisional Population Rural Urban distribution from Census 2011 had been released long before the publication date of this document.
The Census figures are available at
http://censusindia.gov.in/2011-prov-results/paper2/data_files/india/paper2_1.pdf
and the published graphs showing the same time series are here:
http://varshajoshi95.blogspot.in/2012/04/blog-post.html

The difference, 31% as per Census figures and 48% as per the iihs estimates,based on identical criteria, completely change the complexion of the discourse.