Finally, the bottom has been breached! In the recent weeks, investors, both foreign and domestic, have been flocking to safe and liquid US T-Bills thereby driving down yields dramatically. Investors in the short term money market funds, driven by fears of a major impending depression, are pulling money out of mutual funds and hedge funds, forcing portfolio managers to sell more risky assets and hold Treasuries, which are easier to sell. Foreign investors are using American government securities to protect themselves against the falling value of their own currencies.

This NYT report just about sums up the scare driven flight to safety that has gripped the credit markets in the US and made the Fed virtually irrelevant,

"Investors accepted the zero percent rate in the government’s auction on Tuesday of $30 billion worth of short-term securities that mature in four weeks. Demand was so great even for no return that the government could have sold four times as much. In addition, for a brief moment, investors were willing to take a small loss for holding another ultra-safe security, the already-issued three-month Treasury bill!" 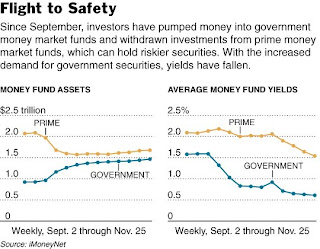 Posted by Urbanomics at 8:24 PM