I had blogged earlier on the debate surrounding the spectacular increase in petroleum price, which had reached $147 in July 2008, only to fall below $40 recently. Oil Drum now feels that the prospects of prices rebounding are bleak, especially given the weakness of the economy and the massive debt accumulated by households.

There are three popular explanantions for the volatility in oil prices - multiple equilibria, importance of the marginal barrel and Hotelling principle.

First, unlike other commodities, oil is characterized by three factors - it is an exhaustible resource, production is controlled by national governments, and for the major oil exporters oil is the overwhelmingly dominant source of national income. Paul Krugman therefore feels that oil exporters respond to high oil prices in three ways - engage in real investment at home, which is subject to diminishing returns; invest abroad, which carries dangers (or frozen accounts etc) for many Middle Eastern oil producers; or "invest" by cutting oil extraction or leaving more supply under the ground for future extraction, and hence reduce supply.

So there is a definite chance that over some range higher oil prices will lead to lower output, which given highly inelastic demand opens up the possibility of multiple equilibria (as proved by Cremer et al). This is corroborated by the history of yo-yo swings in oil prices. The presence of such multiple equilibria leaves the market vulnerable to being tipped from one equilibrium to another even by small events - small production cuts in a tight market, political events, changes in expectations etc - thereby magnifying the volatility. 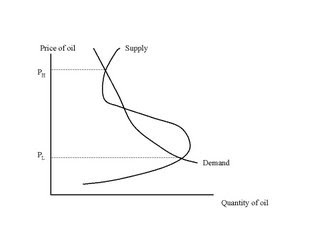 Calculated Risk finds another inflexion point in the massive increases in recent years in government spending in the major oil producing nations. It therefore follows that if the oil prices decline, the need to maintain these high expenditures (in grandiose projects and benevolent welfare largesse) will force many of these producers to increase their production, thereby leading to further falls in prices.

Second, the oil market cares about the marginal barrel and the immediate situation. Oil and natural gas are products that are unlike any other product in history that their use is pervasive and they need long lead times to create alternatives and restructure society around more local energy sources and smaller energy footprints. The high futures prices caused by production shortages or excessive financial ingress into commodities will slow economic activity, which will then reduce demand for oil and prices will plummet and overshoot on the downside, only to bounce back (and overshoot on the upside) when the economy rebounds.

Third, Harold Hotelling in 1931 had suggested that any exhaustible mineral resource under the ground has the same significance as a bond, and is in some sense interchangeable with such a financial instrument. Hotelling Rule states that the unit price of an exhaustible resource less the marginal cost of extracting it will change exponentially over time at a rate equal to the return on comparable capital assets, say interest rates or exchange rates.

As the resource is depleted, the price rises and as the price rises the demand, and hence the consumed quantity, falls. This continues until a price, the backstop price, is reached where an alternative technology or a substitute for the resource becomes economically viable. At this point, the resource is said to be economically exhausted, even though there is some amount of the resource remaining in the ground. Since there is always a backstop technology at a sufficiently high price, it follows that no exhaustible resource can ever be completely extracted. That means that in some sense, exhaustible resources aren't exhaustible.

Interestingly, the steeply declining prices may contain within itself the seeds of future increases. The lower prices have already induced many oil companies to postpone or even cancel exploration projects. The high oil prices had given a filip to oil exploration, making even Canadian tar sands or deep sea reserves off the coast of Brazil attractive options. If the lower prices make these marginal barrels unremunerative, firms are likely to increasingly back off even committed investments, leave alone newer ones.

Standard economic theory says that when demand drops and prices fall, companies curb their investments, leading to lower supplies. When demand recovers, prices rise again and companies start to invest in new production, starting another cycle. It is more pronounced with the oil market. Given the time lag between exploration and getting oil to the pumps, future supplies are strongly co-related with investments made now. Lower prices now therefore appear to be a recipe for higher prices in future, especially when after the economic activity rebounds back and supply is not able to keep pace with demand.
Posted by Urbanomics at 7:29 AM