The Heidelberg Institute for International Conflict Research (HIIK) recently released the latest issue of its Annual Conflict Barometer 2008, which describes recent trends in conflict development, escalations, settlements. The HIIK defines "conflicts as the clashing of interests (positional differences) over national values of some duration and magnitude between at least two parties (organized groups, states, groups of states, organizations) that are determined to pursue their interests and achieve their goals". 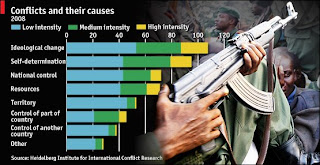 The report documents nine wars and almost 130 violent conflicts across the world in 2008 and classifies conflict broadly to include peaceful disputes over politics or borders (low intensity), as well as those involving sporadic or constant violence (medium or high intensity). It finds that though ideological change is both the most common cause of conflict and the root of most wars, but there is rarely only one cause of dispute. The other commonest causes include self-determination, national control, and control of resources and territory.

(HT: The Economist)
Posted by Urbanomics at 1:00 AM