America's income inequality in a graphic

The graphic strikingly captures the nature of income growth and resultant contribution to widening inequality in the United States. Though median income grew from $8,734 in 1970 to $49,445 in 2010, almost all the real income gains were captured by those at the top 10%. The contrast with economic growth in the previous half-century could not have been starker. 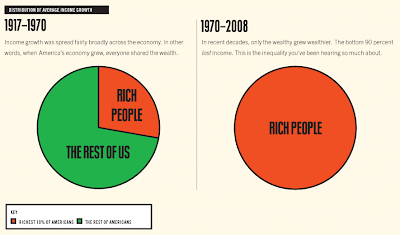 In fact, as Emmanuel Saez has documented, during the 2010 recovery, the top 1 percent captured 93 percent of the income gains, while the incomes of the 99 percent essentially remained flat.
Posted by Urbanomics at 6:44 AM

Email ThisBlogThis!Share to TwitterShare to FacebookShare to Pinterest
Labels: Inequality, US Economy

The sharp fall in top incomes is explained primarily by the collapse of realized capital gains due to the stock-market crash.

It is visible in those graphs that inequality has caused U.S economic downfall. There’s a latest news video by Ed butowsky, entitled “Poverty Rate In U.S. To Hit 15.7%”. You can also watch the video here.