Inside the struggle to control mineral resources

The NYT has a very good article that examines the China-US rivalry in the race to control Cobalt supplies from its largest producer, Democratic People's Republic of Congo (DRC). The article highlights the intersection of two important global issues - the control of minerals vital for emerging industries like electric vehicles and batteries, and destruction of rain forests to facilitate their mining.

The setting is the Kisanfu Cobalt mines, the world's largest untapped cobalt reserves in a country which accounts for two-thirds of the global mineral production. A narrative abstract from the article.

1. These minerals are scarce, available in only a few places, and critical for the emerging technologies.

A Tesla longer-range vehicle requires about 10 pounds of cobalt, more than 400 times the amount in a cellphone.

2. The scale of Chinese control is staggering.

As of last year, 15 of the 19 cobalt-producing mines in Congo were owned or financed by Chinese companies, according to a data analysis by The Times and Benchmark Mineral Intelligence. The biggest alternative to Chinese operators is Glencore, a Switzerland-based company that runs two of the largest cobalt mines there. 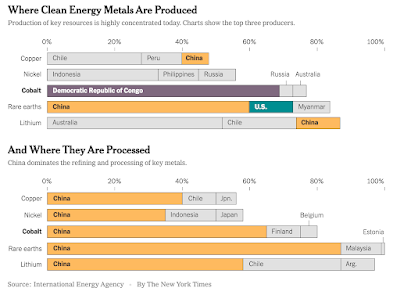 Tenke Fungurume — a 24-hour operation that employs more than 7,000 across a landscape the size of Los Angeles marked by deep craters and dust kicked up by earth-moving vehicles... In August, China Molybdenum announced plans to spend $2.5 billion at Tenke Fungurume to double production over the next two years. When the expansion is complete, the mine will produce nearly 40,000 tons a year. Last year, the United States produced just 600 tons... The ground underneath the Kisanfu site contains enough cobalt, according to China Molybdenum’s estimates, to power hundreds of millions of long-range Teslas.

3. More than anything, the Chinese efforts have been bankrolled by deep pockets of its government.

The five biggest Chinese companies in Congo had been given at least $124 billion in credit lines for their global operations. All of the companies are state-owned or have significant minority stakes held by various levels of the Chinese government.

4. And a standard playbook - control of minerals in exchange for infrastructure. This is a good example,

African countries for years have been turning to China for help building infrastructure with loans or trades involving their natural resources — deals that analysts warn provide far more benefit to the Chinese. A blueprint for those deals, now common across the continent, was sketched out in 2005 when Joseph Kabila walked into the Great Hall of the People in Beijing... Mr. Kabila’s wish list was long: He wanted new roads, schools and hospitals as part of a revival plan that, he hoped, would endear him back home to a nation exhausted and dispirited by years of conflict and corruption. In exchange, he was prepared to offer up his country’s vast mineral wealth — unparalleled in much of the world. In the imposing hall on Tiananmen Square, the two presidents outlined a deal that would change Central Africa’s balance of power... Mr. Hu Jintao explained that many people in China’s western provinces lived in deep poverty. Developing the area was a cornerstone of his domestic policy, and he needed minerals and metals to build out new industries. Congo was ready to help, Mr. Kabila assured him...
The Chinese used the opportunity to begin formal talks with Mr. Kabila that would result in a $6 billion agreement: China would pay for roads, hospitals, rail lines, schools and projects to expand electricity, all in exchange for access to 10 million tons of copper and more than 600,000 tons of cobalt... “2,000 miles of roadway linking Orientale and Katanga provinces, 31 hospitals, 145 health centers, two large universities and 5,000 government housing units are pledged,” according to a cable in 2008 from the U.S. embassy in Kinshasa to members of the Central Intelligence Agency, the secretary of state and other officials.

5. Finally, the Chinese government's invisible hand has actively guided any diplomatic and other manoeuvres required to control these mines. Take this example,

In April 2016, China Molybdenum, a company whose biggest shareholders are a government-owned company and a reclusive billionaire, made its $2.65 billion offer to buy Tenke Fungurume, an American-owned mine atop one of the biggest cobalt reserves in the world. There was one complication. Freeport-McMoRan had a Canadian partner that had the right of first offer to buy its stake. China Molybdenum’s solution was to have a Shanghai-based private equity firm buy out the partner, but even that deal relied on money from the Chinese government. None of the $1.14 billion raised to buy the partner’s share came from private investors, company filings show. Instead, it came from Chinese state-controlled entities, including from bank loans guaranteed by China Molybdenum as well as cash brought to the deal through obscure shell companies controlled by government-owned banks, according to the filings.

6. The Chinese strategic intent to control these emerging technology minerals has been matched by ineptitude, abdication, and greed on the side of American policy makers, corporates, and interest groups. For example, China Molybdenum acquired the Kisanfu site from American mining giant Freeport -McMoRan which, within five years, has moved from being one of the largest producers of Cobalt in Congo to leaving the country entirely.

In fact, the Times reports that Hunter Biden, the son of the President no less, through the China-based private equity firm he founded, helped China Molybdenum buy Tenke Fungurume, a cobalt and copper mine, from Freeport-McMoRan in 2016. Clearly, mammon has swept aside any other consideration for American investors and businesses.

The board of the private equity firm, commonly known as BHR, was dominated by Chinese members but also included three Americans: Devon Archer, a businessman who later was convicted of defrauding the Oglala Sioux tribe in a case still working through the legal system, and James Bulger, son of the former president of the Massachusetts State Senate. Another was Hunter Biden, whose father was vice president at the time.

7. However, having come to control these mines, the actions of the Chinese companies themselves may be working against their interests and stirring up discontent,

Dozens of janitor and driver jobs once held by Congolese citizens went to the Chinese... Employees were concerned that the mine was also becoming more dangerous, according to interviews with workers in communities surrounding the mine, current and former safety inspectors, Congolese government officials and mining executives. Workers climbed into acid tanks to conduct repairs without checking the air quality. Others drove bulldozers and other heavy equipment without training or did dangerous welding jobs without proper oversight... All of it was an extreme departure from the company’s American predecessor, which had “zero tolerance” for risky activities and safety violations. Freeport-McMoRan, which had built the mine, had learned some hard lessons years before at its copper and gold mine in Indonesia, facing international protest over its dumping toxic mine waste into a river in the rainforest as well as violent conflicts over its operations there... When safety inspectors discovered violations after China Molybdenum took over, they were sometimes told to overlook them, or offered bribes to do so, workers and supervisors said. And when they did try to enforce the rules, violence sometimes followed.

8. Now in the race to limit the damage and claw back some of the lost ground, the Americans are supporting efforts to get the Congolese government to exercise greater vigilance on the activities of the Chinese miners and also scrutinise whether they have fulfilled their contractual obligations.

Congolese officials are carrying out a broad review of past mining contracts, work they are doing with financial help from the American government as part of its broader anti-corruption effort. They are examining whether companies are fulfilling their contractual obligations, including a 2008 commitment from China to deliver billions of dollars’ worth of new roads, bridges, power plants and other infrastructure... the Congolese government, with financial assistance from the United States, is examining numerous mining contracts to determine whether Congo has been shortchanged more broadly. While the Chinese-funded infrastructure projects got off to a flashy start, many have not been built... During a visit to the cobalt-mining region this year, the president Felix Tshisekedi said, “Some of our compatriots had badly negotiated the mining contracts. I’m very harsh on these investors who come to enrich themselves alone. They come with empty pockets and leave as billionaires.”

9. This underlines the enormous risks that China faces with these contracts,

Congo’s president, Felix Tshisekedi, in August named a commission to investigate allegations that China Molybdenum, the company that bought the two Freeport-McMoRan properties, might have cheated the Congolese government out of billions of dollars in royalty payments. The company risks being expelled from Congo.

10. These risks are amplified by the most important aspect, the displacement and damage inflicted on the native people by mining activities. Social tensions caused by the presence of outsiders, perceived as exploitative, are never far away.

It's most likely that this will be only the latest version of western-style resource extraction colonialism, with China being the colonial expropriator this time. Like previous episodes, the colonial resource control desire of China and the US-China Cold War will certainly make it very hard for the DRC to benefit from its resources this time too.

This is a good explainer of the issue.

Posted by Urbanomics at 7:18 AM