Jacob Greenspon and Dani Rodrik have an illuminating paper analysing the levels and trends in the global distribution of authorship in economics journals. The paper calls out "striking imbalances".

While Western and Northern European authors have made substantial gains, the representation of authors based in low-income countries remains extremely low -- an order of magnitude lower than the weight of their countries or regions in the global economy. Developing country representation has risen fastest at journals rated 100th or lower, while it has barely increased in journals rated 25th or higher. Fields such as international or development where global diversification may have been expected have not experienced much increase in developing country authorship. These results are consistent with a general increase in the relative supply of research in the rest of the world. But they also indicate authors from developing countries remain excluded from the profession's top-rated journals.

Some graphics. Change in distribution between 1986-2000 and 2001-16 based on publication in journals categorised on ratings.

Change in distribution during the same period across different regions, by field of study. 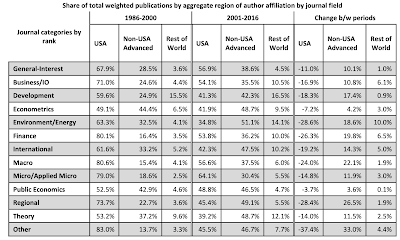 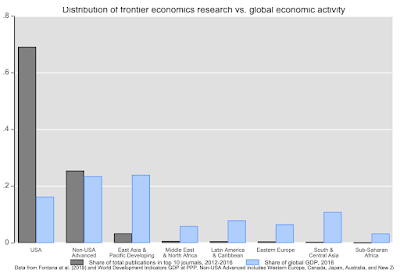 In this context, I'm reminded of an idea which I had written up sometime back and iterated with a  friend, but not followed-up. It's about what Indian-origin academicians and researchers based in the US and Europe can do to improve the quality of research in India.

I'm inclined to argue that they can contribute more meaningfully to their native country by staying with their core-competence of research, instead of pursuing the more glamorous path of offering policy advice to governments. In other words, the spirit of giving back may be best served by mentoring young local researchers, collaborating with local researchers and institutions, publishing in local journals, and finally by occasionally teaching in local universities. Accordingly, here is a list of ways in which foreign-based researchers in Ivy League universities can help academic research in India:

1. Enlist as principal investigators (PIs) local researchers in field work, just as is being done with foreign PI collaborators. The former, besides boosting their confidence will be a great learning experience for local researchers, and also enhance the credibility of their universities. The latter is only furthering individual careers. In simple terms, while the former generates significant positive externalities in nurturing local talent, the latter generates private gains.

2. Support the development of an academic consortium like the BREAD, CEPR, and NBER, hosted by some Indian universities/think tanks. Initiate the process by bringing out their working papers on this platform and even publishing there. Imagine the credibility bestowed and positive network effect generated on a journal if superstar US economists start to publish there. Target the emergence of a world-class Indian social science research journal over a 10 year period.
3. Help Indian students benefit by taking sabbaticals to teach in some Indian universities, even if for a semester. Or at the least find the time to lecture couple of classes occasionally, even if by video-conference (now rapidly becoming the mainstream), or give guest lectures everytime they visit India. Besides benefiting these students, this experience will also help enhance the US-based researchers' own learning and understanding (far more than from a disconnected classroom in the US). The latter is especially relevant to those researching on development economics (as against macroeconomics) where context knowledge is critical.
4. Mentor a handful of India-based young researchers. Give them an opportunity to learn and benefit from the close association. Support them by offering comments on their papers, mentioning their work in esteemed environments and to reputed colleagues, enlisting them as co-PI, inviting them to conferences hosted by their network, co-authoring with them, and so on.
5. Senior academicians in editorial positions should push to have at least one referee from India on "India papers" and listen to their peer review. The journal would benefit as papers that do not take the context seriously or make false assumptions on India will be challenged. Junior faculty based in India will get exposure on how to write in top journals and the network effects will come for free. Besides, it can help with aligning incentives – if as faculty in a big foreign university, you know that your referee could be in India, you would be more humble and polite to them, and even make an effort to invite them for talks (or go present in Indian institutions) much for the same reason they invite researchers in other US universities.
6. Support the emergence of research data repositories, integrated with those in their foreign institutions, with the best data sharing protocols in research, and which is accessible to researchers based in India. This would provide non-discriminatory access to all research data, especially those which are not in the public domain and are privately (by individual researchers) sourced from various government and other agencies. After all, these are all public goods, so why should they be the exclusive preserve of any one researcher, even if that person took the initiative of accessing it.
In fact, the Government of India (like most European countries and the US) should have a policy that mandates all such data be shared with others. It cannot be anybody's case that academic careers be allowed to be built on rent-seeking of data and such research not be subjected to scrutiny by other researchers. In this regard, it is pertinent that all developed countries have restrictions on undertaking research and data access. See this and this (US), this and this (Denmark), this (Germany) etc. India would stand out as perhaps the country with the least controls on undertaking research, preferential access to public data etc.
7. Support the organisation of academic conferences in India (outside of the usual handful which are already being organised and which any case provide a pulpit for foreign researchers) and encourage their Ivy league peers to present papers and participate in them. Similarly, encourage promising young India-based researchers by inviting them to conferences organised by their university and giving them the great opportunity to present their work.
8. Seek out and forge tightly integrated partnerships with local universities and think-tanks in institutional research endeavours rather than establishing stand-alone ventures. Several European institutions have partnerships and visiting positions in US universities. Use all such opportunities to transfer knowledge and technical capacity. To borrow the FDI analogy, establish technology transfer joint-ventures and not fully-owned turnkey projects. This will enrich those institutions, enhance their credibility, and help attract more high quality students and faculty.
9 Support the emergence of world-class research enabling institutional ingredients in India. For example, help develop a common and transparent IRB certification system for social sciences research in India, rather than have captive fiefdoms (like gated communities having their own utility services).
These are only illustrative areas completely within their control where reputed foreign researchers can actually contribute significantly, without relocating back (which is not a case I'm making).
None of this is to overlook the poor general quality of universities, think-tanks, faculty, students, and so on in India. But it is also true there are very good ones in each category. Places like DSE, IGIDR, CDS, Gokhale Institute, TISS, CESS, ISI, MIDS, CPR, Bombay University, Hyderabad University, Ashoka University, and so on are institutions with some excellent faculty who understand Indian context and its challenges far more than most foreign researchers.
None of these are also arguments coming from some swadeshi spirit. Instead, it is to embrace the truest spirit of academic endeavours - inclusive, transparent, and socially beneficial. It's also about leveraging comparative advantage. It is about more equitable research eco-system where there are no barriers and one which contributes to enhancing the quality of research, engagement with public policy, and (through the long route) hopefully the quality of development related debates and policy outcomes.
Posted by Urbanomics at 8:49 AM