Arguably the most important perpetuating factor in widening inequality is the barriers to equality of opportunity in accessing higher education. As Michael Sandel has written in his book, Tyranny of Merit, higher education has become the system by which modern societies "allocate opportunity".

I have blogged earlier pointing to the empirical reality of the higher quality higher education becoming the preserve of the richest people. This, this and this are posts about the Ovarian lottery that access to good higher education has become.

Scott Galloway has two points. The first highlights the fact that undergraduate tuition in the US has risen three times as fast as consumer price inflation since 1980. 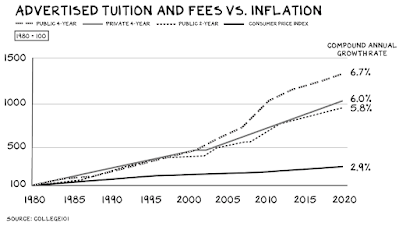 The second draws attention to its impact being much higher on the poor. 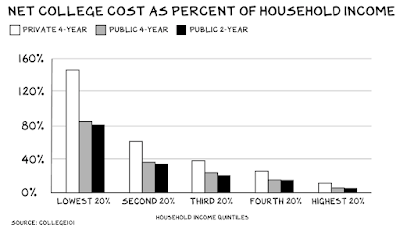 This conveys the point about both forced scarcity and galloping prices,

The greatest assault on middle-class America’s prosperity may be the relentless, four-decade-long inflation in higher education. Student loan debt ($1.7 trillion) is now greater than credit card debt... The number of Americans who have more than $100,000 in student debt is greater than the population of Utah.
The top 200 schools in America educate only 10% of college attendees. And these universities raise prices in perfect lockstep, miraculously, resulting in millions of kids who get arbitraged to mediocre universities but pay an elite price. It’s a cartel, enforced by the accreditation organizations, institutions who are as corrupt as the NCAA … minus the charm. Accreditation has teeth because it determines access to federally guaranteed student loans. And in the last 20 years, these organizations have blessed only 159 new institutions — most of them small and specialized schools — which have collectively grown total enrollment by less than 0.15% per year.

About costs and high salaries paid to senior leaderships in universities. This is mind boggling,

Nearly all of the 100 highest-paid civil servants in Massachusetts are employed by (wait for it) the University of Massachusetts.

Sandel has some stunning statistics about the access barriers,

More than 70% of students at the hundred or so most competitive colleges comes from the top quarter of the income scale, only 3% come from bottom quarter. At Ivy League colleges, Stanford, Duke, and other prestigious places, there are more students from the wealthiest 1% of families than from the entire bottom half of the country. At Yale and Princeton, only about one student in fifty comes from a poor family (bottom 20%). If you come from a rich family (top 1%), your chances of attending an Ivy League school are 77 times greater than if you come from a poor family (bottom 20%). The children of the working class and poor are as unlikely to attend Harvard, Princeton and Yale today as they were in 1954.

Leaving the last word to Sandel,

American higher education is like an elevator in a building that most people enter on the top floor.

Posted by Urbanomics at 6:25 AM