1. As global supply chains show stirrings of calibrating in response to the US tariffs on China, it is a reasonable proposition that India stand to gain. But not by much if we examine China's competitors in some of the largest affected sectors. 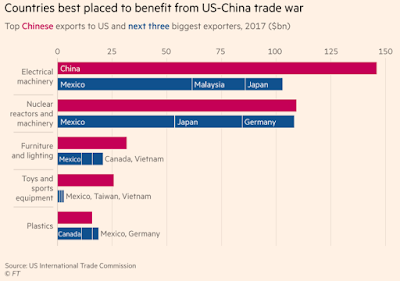 2. Another FT report points to how China has swiftly moved up the value chain to dominate the medium-level technology areas. 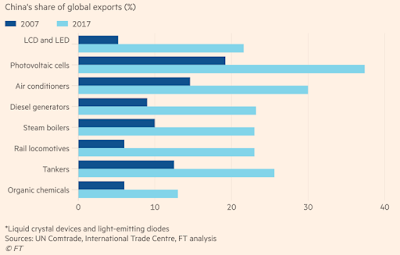 3. Another article draws attention to the pensions crisis staring at developed economies in this age of low interest rates. The graphic below show the grossly inadequate savings of working age population and those close to retirement. 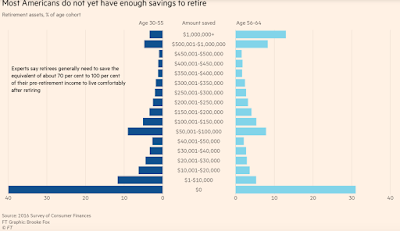 4. Nice article on the growing trend of "pass-the-parcel" deal making (or secondary deals) in private equity space, where one PE firm sells stake to another. Last year the industry did a record 576 such deals. The trend has been associated with successive owners paying themselves large dividends, leveraging up, skimping on investments and maintenance, piling up unpaid pension obligations, and passing on to the next firm when they have squeezed out all the juice they can. In industry lingo, the existing owners "sweat" the asset as much as they can before passing it on. And the game goes on.

This story of Simmons Bedding in the US is emblematic,

In the US, mattress maker Simmons Bedding, which was bought and sold by private equity owners seven times in 20 years, filed for Chapter 11 bankruptcy protection in 2009 and more than 25 per cent of the workforce was laid off. Still, its former owners, which included Thomas H Lee Partners, made a profit of $750m through special dividends, according to a New York Times investigation.

Given the vast volumes of dry powder accumulated by PE firms in recent times, $1.7 trillion and growing, industry watchers expect secondary transactions to rise in the immediate future.

5. Renewable energy facts for the week,

Last year, China added 50 gigawatts of solar power capacity, according to the International Energy Agency — more than it added for coal, gas and nuclear power capacity put together, and equivalent to the combined solar capacity of France and Germany. India, the world’s fastest-growing major economy, added around 9.5GW of solar. The country is on course to hit 28GW by the end of 2018 — six times what it had installed three years ago. Wind is growing less quickly, but from a higher base. Last year, China added 15.6GW of wind capacity — an increase of 10 per cent.

By the end of 2017, the price of solar panels have fallen by more than 80% since 2009, and wind turbines by half. However, recent decision by China to cut incentives for solar power have had the effect of weakening domestic demand for panels forcing manufacturers to dump panels at lower prices abroad, in turn eliciting anti-dumping duties in US, EU, and India.

6. Funny how signatures of Marxian analysis making a comeback is everywhere. The latest is Leonid Bershidsky declaring the gig-economy workers as the modern proletariat. He examines a recent ILO report which surveyed 3500 workers in 75 countries employed on web-based gig-economy jobs found in digital labour platforms,

the average worker on five such platforms earned $4.43 per hour—or just $3.31 an hour if one takes into account all the unpaid time, about 20 minutes per hour, spent looking for orders, researching clients, taking qualification tests and writing reviews. Even that is relatively generous: Another study published last year estimated that “Turkers,” as workers on the Amazon platform are known, made a median hourly wage of $2. Almost two-thirds of US “Turkers,” according to the ILO study, made less than the federal minimum wage of $7.25 an hour, and only 7% of Germans on the Clickworker platform made the statutory minimum wage of 8.84 euros ($10.40) an hour. This would perhaps be marginally tolerable if “crowdworkers” only logged on to supplement income from other jobs. But 32% of those surveyed by the ILO earned their primary income from the platforms. These mostly educated people spend many hours filling out questionnaires for academic researchers, transcribing audio, even moderating content for social networks, which means watching violent videos or reading hate-filled posts all day. This is not the nicest work, and some of it can even have a lasting psychological impact, yet the “crowdworkers” live in a world without the basic worker protections guaranteed even to holders of most menial real-world jobs. Not only do they earn less than the minimum wage, they are not protected against non-payment. No one owes them an explanation when their work is rejected or when they fail a test or receive an unfavourable rating.

7. As IL&FS totters at the precipice and strains show up at others like Dewan Housing Finance, it should serve as a wake up call for financial market regulation. It has rattled the financial markets, and spooked the fixed income securities market and shadow financial sector. The 11,400 odd Non Banking Financial Companies (NBFCs) market with a combined loan book of INR 22.1 trillion ($304 bn) is expected to undergo a major churn with several smaller companies winding down. Several debt and hybrid mutual funds have significant exposure to IL&FS's debt securities and a liquidity crisis threatens the market if funds redemption pressures mount.

There should be greater scrutiny of at least two market participants. One, rating agencies, a culprit in every major financial market crisis in recent times across the world, did not fail to show up this time too. Sample this

The failings of credit rating agencies cannot condone the mindless acceptance of such ratings by fund managers despite the several signatures of concern associated with IL&FS and its business model.

The second one is state-owned Life Insurance Corporation (LIC). It owns a quarter of the failing entity and runs the risk of of being forced to pour money in order to prevent a contagion and systemic collapse. The worrying thing is that LIC, in view of its role as the state-directed buyer of last resort of capital market instruments, may actually be sitting on more such potential duds.

There should also be a deeper scrutiny of the transactions undertaken by IL&FS over the years and their adherence to corporate governance standards. Andy Mukherjee has an excellent starting point here. Ravi Parthasarathy's $3.65 m (INR 25 Cr) take home salary last year is only the latest example of sordid ethics in corporate India.

8. The US enjoys its "exorbitant privilege" in being able to run up deficits in perpetuity and fund it at lower cost than others. While that situation is likely to continue well into the future, some recent trends should a matter of some concern.

Dollar's share of global foreign exchange reserves slid from 66% to 62% since 2014, and that too at a time when the dollar has strengthened by 4.52%.

9. Finally, Bhanuj Kappal has an excellent story in Mint about the problems facing the 30,000 resettled illegal slum residents of Mumbai's Mahul Prakalpgrast Samiti (MMRDA Colony). The colony situated in the outskirts amidst polluting chemical and other industrial factories has become a toxic "human dumping ground".

This is so representative of similar slum rehabilitation programs across Indian cities. Relocate residents far away from their livelihoods (after all large vacant tracts are likely to be available only in the suburbs), poor quality of housing construction by government agencies, colonies with any basic community facilities (schools, hospitals etc) and limited transport connectivity.
Posted by Urbanomics at 4:04 AM