India's state capacity is notoriously weak. Nowhere is it so weak as in its foreign policy apparatus. Bloomberg has a timely article on this,

India Has 1.3 Billion People, But Fewer Than 1,000 Diplomats... The nation of 1.3 billion people only deploys around as many diplomats as New Zealand, which has a population of around 5 million... With roughly 940 foreign service officers, India has one of the most understaffed diplomatic corps of any major country -- just slightly higher than New Zealand’s 885 officers, or Singapore’s 850. It’s vastly outnumbered by the Japanese and Australian services of around 6,000 people, the estimated 7,500 diplomats of rival China and the U.S. State Department’s service of nearly 14,000... In 2016, the ministry said it was still 140 officers short of its sanctioned strength of 912 diplomats. 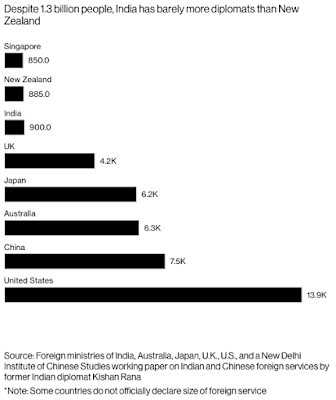 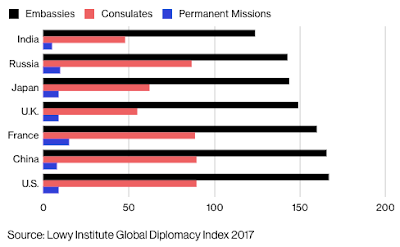 The capacity weakness manifests in its effectiveness

The shortage is particularly pronounced at a time when Modi has increased his foreign travel, visiting nearly 60 countries in just four years. Modi has made five visits each to the U.S. and China and four visits each to Russia and Germany. But thin staffing makes it difficult for India to follow up on his headline-generating outreach.

The decreasing attraction of foreign service as a career is nicely captured by this Shashi Tharoor statement,

It seems appalling that we have to make do with a diplomat who is only there because he couldn’t fulfill his dream of being a police superintendent or customs official.

A good article on the Indian diplomatic footprint and strength here. On personnel,

In 2016, briefing the Parliamentary Standing Committee on External Affairs, then foreign secretary S. Jaishankar, now the External Affairs Minister, had said India has 2,700 diplomats. Asked to provide a breakdown, he told the committee that it included 912 IFS (A) grade officers, 252 Grade 1 IFS (B) officers, 33 of the Interpreters Cadre, 24 of the Legal and Treaties Cadre, 635 attaches, 540 diplomatic officers from sectorial staff, and 310 diplomatic officers for other ministries. Compare this to other world powers — South Korea has over 1,250 diplomats, New Zealand has over 1,300, Brazil has over 2,000, China has over 4,500, and Japan has over 5,700. Even a small island nation like Singapore has 800-850 diplomats — nearly as many as India’s IFS ‘A’ cadre.

On strength and footprint,

According to Australian think tank Lowy Institute’s Global Diplomacy Index, India’s diplomatic network ranks 12th in the world — behind smaller countries such as Turkey, Spain, and Italy. A more micro-level comparison with China and Brazil sheds light on India’s relatively smaller global footprint — China has 276 total diplomatic posts around the world, Brazil has 222 and India 186. In terms of embassies and high commissions, China has 169, Brazil has 138, and India has 123, while in terms of consulates and consulate-generals, China has 96, Brazil 70, and India 54. This means Brazil, whose GDP is about $1.8 trillion, almost a trillion less than India’s, has a larger global presence than India... India’s Permanent Mission at the United Nations has 14 officers, while its Chinese counterpart has 12 separate divisions, with many more officers serving in each of them. Similarly, at the World Trade Organization (WTO), India has eight officers, while China is believed to house a staff of 1,000.

This about the waning glamour of IFS among civil service examination successful,

“During our times, just about 10 officers would be selected in the IFS,” said a senior IAS officer. “But those would be the top 10 officers… The first IAS officer would be the 11th rank.” Data also corroborates this trend. Until the early 1970s, the IFS drew its officers from the top ranks of the UPSC exam. In 1972, for example, 20 of the top 26 of the selected candidates chose the IFS. By 1988, the government was forced to go down to the 480th position to pick 10 IFS officers. In recent years, this trend has continued. Of the 30 IFS officers picked by the UPSC in 2018, only eight ranked among the top 100. In 2017, the first officer to be allotted the IFS ranked 17th, and the number of officers ranked among the top 100 was just five. In 2016, the number of IFS officers in the top 100 was just seven.

Posted by Urbanomics at 1:19 AM

Gone are the days when the Indian Foreign Service used to be the top choice among UPSC applicants. These days the allure of a foreign posting has gone down significantly.

Also - that Bloomberg article speaks of China as a "rival" to India. That's like calling Mexico a rival of the United States. Indians often like to compare themselves to China, and are proud of their international recognition and "democracy" - real or imagined. In reality, there's no comparison whatsoever - especially in foreign policy. Who can forget that famous case of Modi going to Mongolia and making empty promises which India could not keep: https://www.oneindia.com/india/iran-says-india-promises-chabahar-not-fulfilled-mongolia-china-2732539.html

Countries may hate China or love it - but there's a healthy amount of respect too for China's unique achievements. Everyone knows that there is at least something that they can learn from China.

And what can they learn from India, dare I ask? Perhaps how to keep your nation hungrier than North Korea: https://www.weforum.org/agenda/2017/10/india-is-hungrier-than-north-korea ;-)