Where is India's middle class?

Livemint points to a Pew research work which highlights that while the global middle class (with per capita incomes more than $10 per day) has grown from 7% to 13% of total population in the 2001-11 period, nearly two-thirds continue to remain poor (less than $2 per day) or low-income. 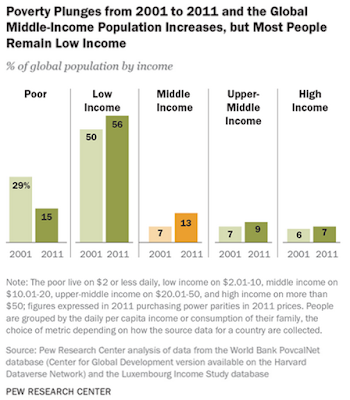 The income distribution barely shifted at the top half of the income ladder. 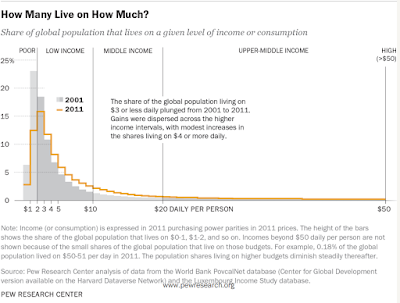 In India, while the share of poor declined from 35% to 20%, the middle income hardly changed, inching up from 1.4% to 2.6% in the same period. In fact, among all its major peers whose middle class share is more than 20% of the population, India is easily a disconcerting outlier in its middle-class share. 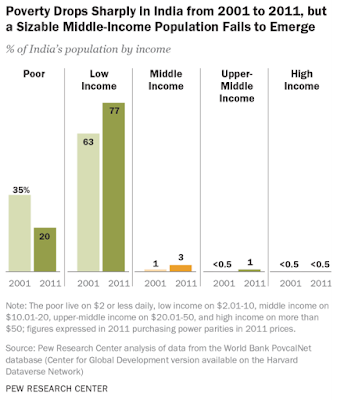 This raises several disturbing questions about the country's long-term growth prospects. At 3%, those with middle class incomes and above constitute just 37 million, and is clearly not growing at a satisfactory enough rate to sustain very high economic growth rates. Simply put there aren't enough Indians around who can afford refrigerators and cars, shop at the malls, buy a house in a metropolis, send their children for management education or get treatment at Apollo hospitals, or take-off for annual vacations within the country. Further, since the stock of middle class is growing ever so slowly, the boost from the pent-up demand may be tapering off. Even doubling this estimate, assuming the Pew study is off the mark (which is unlikely given that the recently released Socio-Economic Survey of India points to similar trends), does little to minimize the concern.

The Livemint points to this graphic on India's very narrow middle class. The lowest income tax assessee comes in at the 94.2 percentile of income distribution, whereas those paying in the highest income tax bracket make up just 0.5% of the population. 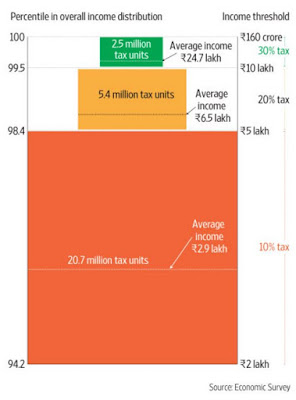 Posted by Urbanomics at 8:46 AM