1. The most popular example of capitalism with Chinese characteristics has been the crawling renminbi peg. Since 2005, the currency has appreciated 30%. As FT reported, while the direction of currency movement was clear, the pace and timing of changes not. 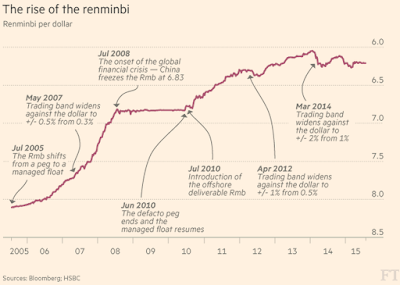 2. As Africa has weaned away in recent years from brutal dictators and internecine civil conflicts, a new scourge threatens to engulf large parts of the continent - extremist Islamism. As the graphic below shows, more than a dozen northern and sub-Saharan African countries are fighting the menace of Jihadism. Such Jihadism in turn forms the ideological breeding ground and recruitment centers for extremist groups like Al-Qaeda and ISIL. 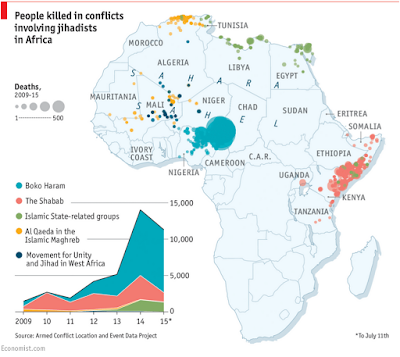 And where do these groups draw their strength,

Although the extremist groups are backed by well-financed elites, they could not survive without popular support. Every one of them taps into well-known local grievances. From Mali and Nigeria to Kenya and Tanzania the story is the same: extremists emerge from and woo Muslim populations on the national periphery who are fed up with decades of neglect, discrimination and mistreatment by their rulers. Jihadists are able to exploit existing religious tensions and latch on to disgruntled Muslim communities. In addition, the conflicts they stir up have created ever bigger populations of refugees, who are either vulnerable to radicalization or likely to cause the sort of resentment that fuels it. Increasingly what drives African extremism is not just opportunity or firepower but ideology. No grand caliphate stretching from Mosul in norther Iraq to Maiduguri in north-eastern Nigeria is likely to emerge. Yet a distinct flavour of poisonous thinking has spread across thousands of miles. Islamism is the continent's new ideology of protest.

3. China has rapidly displaced the US and Europe as the largest investment partner across the developing world. As this NYT article and the interactive graphic shows, China has shown an amazing appetite to invest in some of the most difficult regions of the world, especially in Middle East, Africa, and parts of Latin America, which are largely avoided by western businesses and development finance institutions for both economic and political reasons.

For Beijing, these investments, mainly in the form of loans by state-owned banks, form part of its efforts to "win diplomatic allies, invest its vast wealth, promote its currency and secure much-needed natural resources". In countries which are starved of foreign funding, the Chinese readily offer financing, albeit at steep interest rates, most often in return for securing access to their natural resources and the expertise of their construction and mining companies. Consider this,

China has a lock on close to 90 percent of Ecuador’s oil exports, which mostly goes to paying off its loans... The Chinese money, though, comes with its own conditions. Along with steep interest payments, Ecuador is largely required to use Chinese companies and technologies on the projects... Energy projects and stakes have accounted for two-fifths of China’s $630 billion of overseas investments in the last decade, according to Derek Scissors, an analyst at the American Enterprise Institute... Chinese mining and manufacturing operations, like many American and European companies in previous decades, have been accused of abusing workers overseas. China’s coal-fired power plants and industrial factories are adding to pollution problems in developing nations...Chinese companies are at the center of a worldwide construction boom, mostly financed by Chinese banks. They are building power plants in Serbia, glass and cement factories in Ethiopia, low-income housing in Venezuela and natural gas pipelines in Uzbekistan.

The graphic below captures the $11 bn China has loaned Ecuador, mostly to finance hydro and wind power, transportation, mining, oil drilling, and river water linking. This is broadly representative of the country's investments elsewhere. 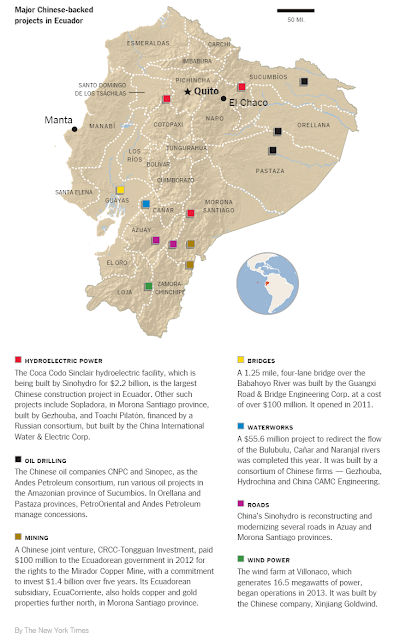 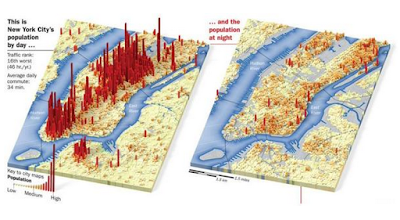 The daytime map reflects the population that commute to NYC for work, tourism, and other purposes, whereas the night time population captures the actual city residents. As this graphic shows, the hollowing out of the city center during night times is representative of other US cities and a reflection of the countries suburban growth. It drives home the importance of mixed-use urban planning in ensuring the vibrancy of cities. It also serves as a striking reminder to urban planners that estimations of work commuters and tourists are probably as much or more important than that of residents in planning infrastructure facilities for large cities.

5. As the US economic productivity has dipped to below 1% since 2010, Robert Solow's famous quip that "you can see the computer age everywhere but in the productivity statistics" has been much highlighted. WSJ has a nice article on this debate. 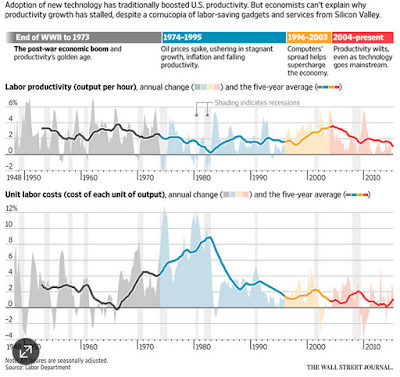 However, as a counter-point, Google's Chief Economist Hal Varian has claimed that US doesn't have a productivity problem, but it has a measurement problem. Pointing to the improvements in the quality of life brought about by the digital economy and time-saving apps, he argues that it is very difficult to capture the impact of quality improvements. Critics though claim that such measurement problems have always been there, understating the productivity measurements.

6. Fantastic visualization of the income levels along New York metro lines from this New Yorker project. 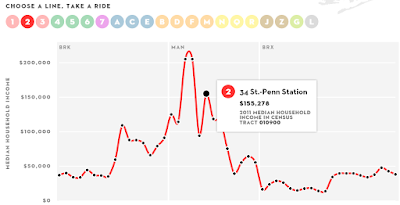 Similar maps of Washington and a few other cities by MIT Media Lab are here.
Posted by Urbanomics at 6:00 AM