A country can reduce a very high debt burden by one or all of the three means - sustained GDP growth, persistent inflation, or write-downs. So how does Greece fare?

Far from growing, the Greek  economy has contracted sharply and sustained growth appears a chimera. Given its structural weakness and lack of competitiveness against other Eurozone members, economic growth prospects for the foreseeable future are not promising. In light of this, the debt to GDP ratio, currently at nearly 175%, cannot be expected come down to reasonable levels, even if the country accumulates no more debt or gradually pays down its debt. The lack of competitiveness also means that the strategy of export-to-growth too may be difficult without very sharp devaluation, which would in turn require Grexit. Inflating its way out is a very remote prospect as long as the country stays in Eurozone. In any case, Grexit and devaluation carries considerable contractionary risks for a country deeply dependent on natural resource imports. High inflation would only compound the problems.

It should be borne in mind that the recent balancing of fiscal deficit and current account deficits, driven by forced contraction of public spending and imports, are most certain to be temporary. Government spending has contracted 31% from Q1 2008 to Q1 2015 on the back of sharp pension cuts and 25% retrenchment of public employment. It is a testament to the severity of the contraction (and the weakness in private sector growth) that despite this, government spending as a share of GDP rose from 48% to nearly 60% in the same period. On the external account, imports contracted 38% between Q3 2008 and Q1 2015, whereas exports rose just 4% in the period, whereas current account deficit shrunk from minus 14.6% for 2008 to plus 0.6% for 2014. Clearly, apart from devastating the economy, these figures does little to support any belief in private sector led economic growth and export-led growth. For a country which has been historically running up internal and external deficits, there is little to suggest that this time (post-Grexit) will be different.

The magnitude of the contraction in Greek economy in the 2008-2013 period has been staggering. It contracted by 24% in the period. If we assume a trend growth of 3% (the 2001-07 average growth was 4.11%), then the economy is 40% below its potential output. These are truly frightening numbers, comparable only to the Great Depression in the US. 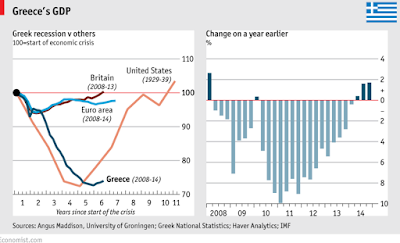 This leaves write-downs as the only possibility to pare down debt. A comprehensive debt restructuring with significant haircuts is essential for any realistic plan to restore economic growth. Since the counterparties to these debts include German and French banks, its political acceptability will be in question.

The troika bailouts of 2010 and 2012 involved no haircuts and the fresh loans only rolled over the existing debt, thereby kicking the can down the road. The ECB quantitative easing announced in July 2012 helped temporarily ease borrowing costs and buy time. Any new bailout has to perforce involve haircuts to not become a repeat of the previous two instances. Further, delaying the decision only weakens the Greek economy, prolongs human suffering, and increases the magnitude of the haircuts. Worse still it could have deeply destabilising effects on the political system.

So the country is now faced with the prospect of exiting the Euro and navigating a very turbulent "deep blue sea" or hoping that its Eurozone creditors agree to take haircuts. This Anil Kashyap note is an excellent primer.
Posted by Urbanomics at 9:40 AM