Living with debt and what it means for countries like India

It is a sign of the times that the IMF has in the recent past departed from orthodoxy in many areas of macroeconomic management. After accommodating the possibility of capital controls, higher inflation target, and fiscal expansion even when faced with large and growing deficits, the latest mea culpa comes in the form of the possibility of "living with high debt".

At a time when many developed economies face high and growing public debt ratios, a highly contentious debate has been raging about addressing this problem. One side, represented by those advocating fiscal austerity, austerians, have been demanding policies for immediate reduction of debts. The other side, represented by Keynesians, oppose this and argue that growth recovery is the priority and the ultra-low interest rate environment demands more public spending, even if it increases the debt burden.

Now the IMF has waded into the debate, pointing to the possibility of "living with high debt". Its conclusion,

Countries facing imminent risk of a curtailment of market access, or that need to re-establish fiscal space against the risk of contingent liabilities or other shocks, naturally do not have the luxury of living with high debt. For others, the appropriate pace depends on the availability of non- (or less) distortionary sources of tax revenue. And for those countries in the fortunate position of enjoying asset price booms, the message must be that they should seize the opportunity to pay down public debt. In sum, the appropriate response to high levels of public debt depends very much on the extent of available fiscal space and other factors. There is no one-size-fits-all message: be it to pay down the debt to reduce the risk of a funding crisis or to live with the debt, letting the debt ratio decline organically through growth. Countries in the yellow and red zones in terms of fiscal space will not be in a position to “live with the debt.” But nor is it the case that countries with ample space— those firmly in the green zone—should rush to pay down their debt.

Blessed with the IMF imprimatur, now consider the table below (numbers from here) which aggregates the debt to GDP ratios - dis-aggregated into component household, corporate, and government debts - of some of the larger Asian emerging economies from 2000... 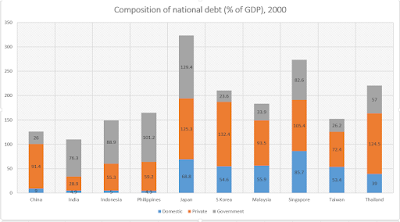 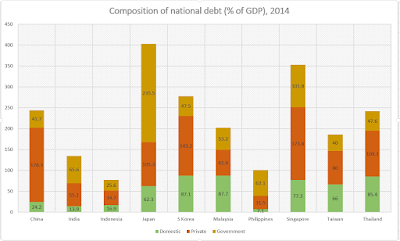 It is evident that countries like India, Indonesia, and Philippines not only have low debt-to-GDP ratios, but also those ratios have been stable for more than a decade and even declining in recent years. In particular, household debt-to-GDP ratios for these three countries are among the lowest, and aggregate corporate debt (not that concentrated among the small proportion of the largest corporate groups) far lower than in their fast-growing peer group (during their fast-growing years).

For these countries, in their search for economic growth leg-room, this is encouraging news. There is large potential for credit absorption among the small and medium enterprises as well as for household consumption (especially in housing and consumer durables). But the challenge is to realize this opportunity by improving credit intermediation mechanisms and getting money across to these categories of borrowers.
Posted by Urbanomics at 8:15 AM