Some thoughts on the individual taxation regime

The recent expose by ProPublica of the IRS filings of some of the richest Americans over the past fifteen years show that several of them paid no or little by way of income tax for multiple years. This despite massive increases in their wealth due to increases in stocks and other assets owned by them. 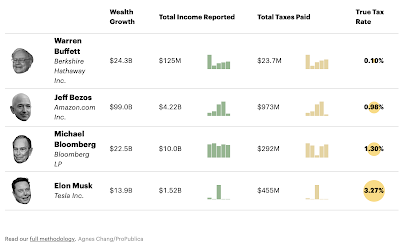 At one level, it can argued that the rich are not doing anything illegal and ProPublica is sensationalising the issue by calculating their tax rate on their wealth as against incomes, and their wealth is marked to market and not realised. But this overlooks the reality that the differential treatment accorded to capital gains incentivises the rich to add to their wealth without going through the income route.
In this context, in a recent NYT oped Anand Giridharadas took on Warren Buffet. I understand Anand to be a polarising figure and Warren Buffet to be the sage of Omaha. But his message is important. Warren Buffet has often argued in favour of higher income taxes, winning acclaim and further adding to his almost messianic image. Therefore, when it emerges that he paid just $23.7 million in income tax over the 2014-18 period even as his wealth soared by $24.3 bn, and he has most certainly engaged in large scale tax avoidance strategies to shift away from taxable incomes towards non-taxable wealth, it's only natural that he invites accusations of hypocrisy. Anand calls it out and uses the striking nature of Buffet's example to make a point,

The important point here is that Mr. Buffett’s tax payments as detailed by ProPublica are fully legal. Though Mr. Buffett has called for changing the tax system, while we have the one we have, he will continue to benefit from the madness of taxing billionaires for their income, rather than their wealth, when their income is pretty much just a number they can construct.

The ProPublic expose does a good job in drawing attention to the issue of low taxes that high net worth individuals pay. But it also highlights the problems with the prevailing taxation regime. There are at least four important aspects that need attention.

One, the major share of the wealth of the richest come in the form of assets and its capital gains, especially financial and property assets. In the circumstances, wealth taxation becomes a matter of priority. In this context, it is worth reminding ourselves that the current prioritisation of income tax and relegation of wealth tax comes from the assumption that people earn incomes (from either wages or capital) whose accumulation in turn leads to wealth. This income path dependency of wealth no longer holds true for the vast majority of today's wealth.

The ProPublica article has a good graphic that compares the income tax payments and wealth increases of Jeff Bezos and the typical American household. 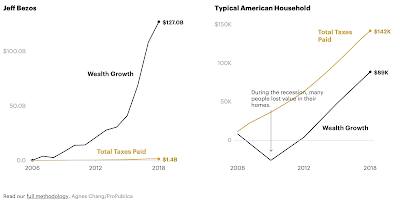 Second, most of this wealth is marked to market and therefore capital gains fluctuates with the market conditions. It is a reasonable argument that it can be taxed only when the capital gains are realised. However, this raises the issue of taxing actions which contributes to these capital gains. For example, share buybacks financed by debt, whose interest payments are currently tax deductible, and which in turn raise capital gains, should be discouraged.

Third, even when realised, capital gains are taxed at a lower rate, with the rates being even lower for longer-term (mostly more than one year) capital gains. Further, why should more than one year be considered long-term? Consider the example of people taxed on share buyback. They (and the company) enjoys two benefits - the interest on loan taken to finance the buyback is tax deductible, and the capital gains is taxed at a lower rate. This distortion, amplified by an ultra-low interest rate environment in the US, has resulted in more money being spent in recent years on debt-financed share buybacks than on investments.

Four, while the case for non-taxation of physically unrealised wealth is understandable, it also raises a problem since such wealth, especially in the form of shares, has become an almost perfect substitute for cash (and therefore income) and therefore used for many financial market   transactions. Opaque structures allow capital gains to be exchanged for building ever more capital while avoiding taxes. Howsoever difficult it may be, tax regimes should accordingly explicitly and unambiguously include for taxation of any capital gains financed transactions on the same lines as realised capital gains.

To the extent that individual taxation is an important means to allow governments to raise resources and deliver public goods, the time has come to re-examine the current mainly income tax based individual taxation regime and replace it with another which also includes the other important source of wealth generation, capital gains.

The analysis suggests that the wealthiest 400 households in America — those with net worth ranging between $2.1 billion and $160 billion — pay an effective federal income tax rate of just over 8 percent per year on average... The White House’s calculation of what the wealthiest pay in taxes is well below what other analyses have found. The difference comes from the White House officials’ decision to count the rising value of wealthy Americans’ stock portfolios — which is not taxed on an annual basis — as income. It finds that between 2010 and 2018, those top 400 households, when including the rising value of their wealth, earned a combined $1.8 trillion and paid an estimated $149 billion in federal individual income taxes.

The authors of the study point to two types of preferential treatment for certain income in the tax code,

The federal government taxes income from wages at a higher rate than income from investments, and most wealthy households report a significantly larger share of their income from capital gains and dividends than typical taxpayers do. Mr. Leiserson and Mr. Yagan noted that “the wealthy can choose when their capital gains income appears on their income tax returns and even prevent it from ever appearing.” “If a wealthy investor never sells stock that has increased in value, those investment gains are wiped out for income tax purposes when those assets are passed on to their heirs under a provision known as stepped-up basis,” they wrote. Mr. Biden has proposed changing both those tax treatments. He would raise the capital gains rate to match the rate paid on wage income. And he would eliminate the stepped-up basis provision for wealthy heirs.

Posted by Urbanomics at 7:14 AM