Corruption and renegotiations in infrastructure - case of Oderbrecht

I have blogged on several occasions pointing to the problem of renegotiations that plague infrastructure contracts. While the theory and anecdotal evidence is well-known, empirical evidence on this has been scarce.

In this context, Eduardo Engel, Nicolas Campos, and co-authors have an excellent paper on the Oderbrecht corruption scandal, often described as by far the largest cross-country corruption scam in history. This description conveys the scale,

The Odebrecht case leaves you speechless. This case implicated almost one-third of Brazil’s senators and almost half of all Brazil’s governors. A single company paid bribes to 415 politicians and 26 political parties in Brazil. It makes the Watergate scandal look like a bunch of kids playing in a sandbox.

Its political implications were unprecedented across Latin America,

The plea agreement between the US Department of Justice and Odebrecht triggered judicial investigations in several countries, leading to plea bargains and additional disclosures of political corruption. In Peru, President Pedro Pablo Kuczynski was forced to resign, and of the three previous Peruvian Presidents, Alan García committed suicide, Alejandro Toledo fled the country, and Ollanta Humala spent time in jail. In Brazil, former president Luis Inácio Lula da Silva spent 19 months in prison in connection with alleged bribe payments made by rival construction firm OAS; in Ecuador, former vice-president Jorge Glas was sentenced to six years in jail. The Odebrecht case may have weakened the confidence of the public in democracy and helped lead to the current wave of populism in Latin America.

An elaborate system was put in place within the company to manage the bribe transactions,

By 2006, bribery at Odebrecht had become so institutionalized that the company created the Division of Structured Operations (DSO), a stand-alone department dedicated to corruption. According to the plea agreement between the Odebrecht chief executive officer Marcelo Odebrecht and the US Department of Justice, the DSO specialized in buying influence through legal and illegal contributions to political campaigns and also in paying bribes to public officials and politicians. Within the DSO, three full-time executives and four experienced assistants were responsible for paying bribes to foreign accounts. Bribe payments followed a clear organizational flow. A contract manager would deal with potential bribe recipients—public officials and politicians—and reported to the country manager. The country manager could approve small bribes paid with local funds. Larger bribes were vetted by an executive reporting directly to the Odebrecht chief executive officer who often made the final decision.

Once a bribe was authorized, the Division of Structured Operations registered, managed, and made the payment through a network of shell companies, off-book transactions, and off-shore bank accounts. This included the Antigua subsidiary of Austria’s Meinl Bank, bought for this purpose by Odebrecht. The DSO also used an independently funded parallel cash trove (called Caixa 2). As the US Department of Justice (2016) described the arrangements: “[T]o conceal its activities, the Division of Structured Operations utilized an entirely separate and off-book communications system . . . to communicate with one another and with outside financial operators . . . via secure emails and instant messages, using codenames and passwords.” The DSO also used a bespoke information management system for bookkeeping and to track information flows.

The company bribed to both win contracts and renegotiate them,

Odebrecht bribed to tailor auctions in its favor and to obtain favorable terms when renegotiating the contract after the projects were awarded... Odebrecht had bribed about 600 politicians and public servants in ten Latin American countries to win the public bidding process of large infrastructure projects, and to renegotiate the projects at higher prices after winning them... Odebrecht distorted the firm selection process in various ways. The evaluation of the technical expertise of participants was often biased in projects that were tendered competitively. For example, if the technical score was a weighted average of objective and subjective components, the weights would be chosen to favor Odebrecht. Alternatively, Odebrecht could be arbitrarily awarded the highest possible technical score, while its competitors received a lower score. In other cases, potential bidders were disqualified by setting technical requirements that only Odebrecht could meet...

First, for 46 of the 62 projects where we found evidence of a quid pro quo, Odebrecht bribed to manipulate subjective bid criteria to either exclude or disadvantage rivals. Second, in 30 projects, Odebrecht bribed to obtain better terms when renegotiating the contract after the projects were awarded. Third, in nine projects, Odebrecht paid a bribe because a public official threatened to block the project. Extortion has been mentioned in the literature as a reason to pay bribes, but it is less frequent in the Odebrecht case. For 27 out of the 62 projects for which we found evidence of the quid pro quo, more than one of these reasons applied. 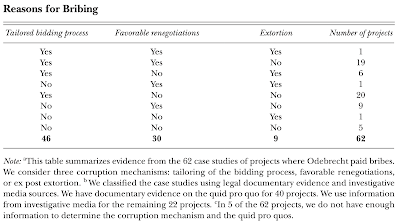 Many contracts were renegotiated multiple times, sometimes even ten times.

The biggest contribution of the paper is in making empirical estimates of the returns from bribing to renegotiate infrastructure contracts,

The US Department of Justice was able to estimate gross profits made by paying bribes in each country— “any profit earned on a particular project for which a profit was generated as the result of a bribe payment”... Odebrecht paid $786 million in bribes and obtained gross profits equal to $3,160 million. That is, Odebrecht made $3 in net profits for every $1 it paid in bribes... For the eight countries with complete data at the top panel of the table, cost increased by 40.1 percent after renegotiations, with substantial variation across countries and projects. For the 105 projects from Brazil for which we have data, costs increased by 17.4 percent... in the 26 projects with no bribes, costs increased by a weighted average of 5.6 percent after renegotiations (simple average 16.3 percent). In contrast, in the 62 projects where Odebrecht paid bribes, costs rose by 70.8 percent after renegotiations. Thus, cost increases in renegotiations are about 12 times larger when Odebrecht paid a bribe.

... repeating the computations using only legal documents... Odebrecht paid bribes in 45 projects. Now the amount renegotiated increases from 10.9 percent when there are no bribes, compared to 84.9 percent with bribes. Data from the Odebrecht projects in Brazil for which we could obtain information also show that renegotiations were larger when bribes were paid, even though cost increases were smaller overall. Specifically, using legal and media sources to detect bribe payments, we find that renegotiations in projects with bribes led to a cost increase of 18.9 percent compared with 4.1 percent for projects without bribes (both weighted averages). If instead we consider simple averages, the percentages are 24.5 and 6.2 percent, respectively. Again, as a robustness check, if we only consider legal sources to determine whether bribes were paid, the above percentages are 18.8 versus 6.2 percent for weighted averages (or 24.6 versus 6.9 percent for simple averages). 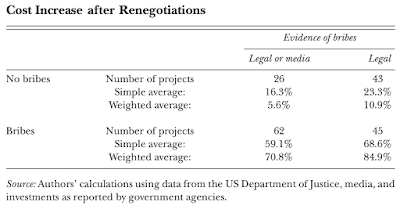 This estimate of the extent of corruption in infrastructure projects is useful,

Kenny (2009) concludes that bribes in the infrastructure sector are between 5 and 20 percent of construction costs while Glaeser (2019) reports that highway cost overruns due to corruption lie between 20 and 30 percent of project cost. Olken (2007) measured the difference between what an Indonesian village government spent on a road and a cost estimate by expert engineers. Unaccounted expenditures averaged approximately one-fourth of the total cost of the road. Collier, Kirchberger, and Söderbom (2016) showed that the unit cost of roads is 15 percent higher in countries where corruption, as measured by the World Governance Indicators, is above the median. In 2004 the American Society of Civil Engineers claimed that corruption accounts for an estimated $340 billion of worldwide construction costs each year, around 10 percent of the global construction industry value added of $3.2 trillion.

But in case of Oderbrecht, also given the larger project sizes, bribes as a share of project cost was very small, less than 1%.

Everything in this paper applies to infrastructure and PPP contracting across the world, developing and developed countries. In developing countries, like with Brazil, the rent-seeking is often direct. Officials  subvert technical qualification norms or favour contractors in the terms of renegotiations, in return for direct payments of bribes.

But in developed countries, it comes in the more sophisticated forms, with less of explicit cash transfers. One route is the close nexus between consultants who assist governments with bid process management and contracting. I have blogged here how consultants have become the new brokers for rent-seeking, the conduits for influence peddling and bribery in large projects.

The long-term nature of PPP concessions is attractive for rent-seeking. Unlike a public construction contract where the bribery is confined to winning the contract (and therefore to the party/government in power when the tender was finalised), a concession offers rent-seeking opportunities throughout the project lifecycle. So, after the project is constructed, the concessionaire often comes back to renegotiate on investment commitments or operation and maintenance (O&M) terms or something else. These renegotiations span the tenures of successive governments, allowing each of them to benefit from the stream of renegotiation interfaces for each project.

There is another impressive aspect to the Oderbrecht case. It's the minute details of transactions which have been uncovered and evidence gathered to prosecute so many high profile leaders across countries. This must rank as one of the most impressive anti-corruption campaigns in history, one where the investigators, prosecutors and the judiciary have all acquitted themselves with remarkable effectiveness.

It's also a lesson to anti-corruption agencies, prosecutors, and judges in India, where even the elite institutions like the CBI struggle to succeed in prosecuting in even the most egregious cases. The Courts must take their due share of the blame for this remarkable track record of such consistent failure.