The limits to human job displacement

David Autor, arguably the leading academic tracking the technology and other structural shifts induced changes in the labor market, presented an interesting paper at the recently concluded Kansas Fed's annual Jackson Hole meeting. The paper talked about the recent trend of the displacement of middle-paying jobs by computers. 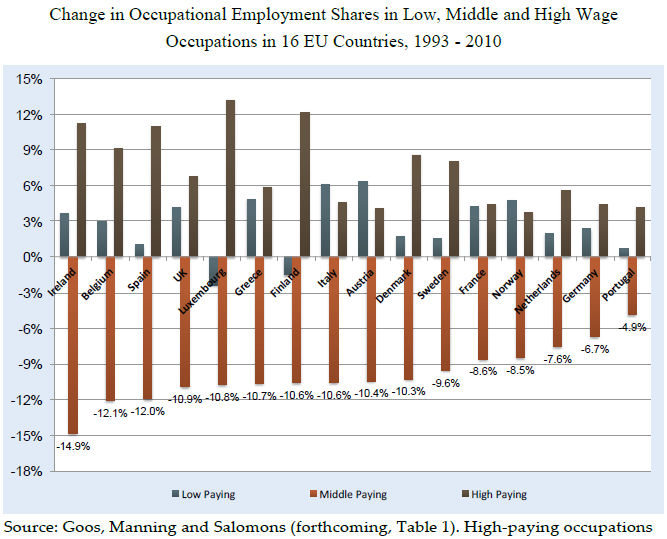 He invokes Karl Polanyi's famous paradox ("we know more than we can tell" - the tacit knowledge of how the world works often exceeds our explicit understanding) to argue that the challenges to substituting machines for workers by computerizing every day tasks (especially those that require adapatability, common sense, and creativity) are possibly insurmountable. He argues that the trend of automation of "middle-skill" jobs is not likely to continue to its logical climax,


While many middle skill tasks are susceptible to automation, many middle skill jobs demand a mixture of tasks from across the skill spectrum... Why are these middle skill jobs likely to persist and, potentially, to grow? My conjecture is that many of the tasks currently bundled into these jobs cannot readily be unbundled - with machines performing the middle skill tasks and workers performing the residual - without a substantial drop in quality... routine and non-­routine tasks will generally coexist within an occupation to the degree that they are complements - that is, the quality of the service improves when the worker combines technical expertise and human flexibility.

This reasoning suggests that many of the middle skill jobs that persist in the future will combine routine technical tasks with the set of non-routine tasks in which workers hold comparative advantage - interpersonal interaction, flexibility, adaptability and problem-solving. Medical support occupations are one leading example of this virtuous combination, but this example is not a singularity. This broad description also fits numerous skilled trade and repair occupations - plumbers, builders, electricians, HVAC installers, automotive technicians - marketing occupations, and even modern clerical occupations that provide co-ordination and decision-making functions rather than simply typing and filing.

He also argues that the strategy of "machine learning" - "applying statistics and inductive reasoning to supply best guess answers in cases where formal procedural rules are unknown" (or exposure, training, and reinforcement, by stuffing data and using inductive logic) - to overcome Polanyi's Paradox may not be successful. Such machine learning by using a large training database, while useful to recognize features and images, cannot work when the object (say, chair) is also determined by other traits like its potential use (say, a traffic cone) or its location (say, a toilet seat).

However, as FT Alphaville writes, quoting the example of driverless cars, such predictions about the future have limited value given the uncertainties involved.

Update 1 (2/9/2014)
NYT has this article which explains the failure of robots to match humans with perception and mobility, the Moravec Paradox. It highlights the latest research in haptics, study of sensations of touch, and kinematics, study of motion control in jointed bodies.

A study by Carl Benedikt Frey and Michael Osborne that examined the potential impact of computerization on 702 occupations in the US found,


We examine expected impacts of future computerisation on US labour market outcomes, with the primary objective of analysing the number of jobs at risk and the relationship between an occupation’s probability of computerisation, wages and educational attainment. According to our estimates, about 47 percent of total US employment is at risk. We further provide evidence that wages and educational attainment exhibit a strong negative relationship with an occupation’s probability of computerisation.

This graphic captures the potential for computerization (and the resultant probability of displacement) among different occupation categories in the US in 2010. 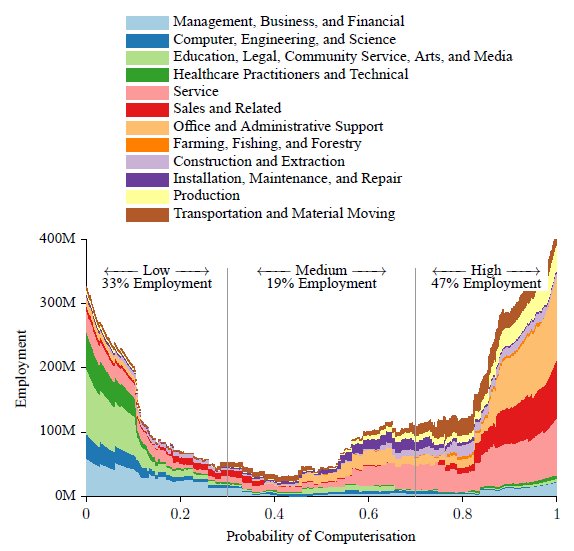 Times has another report on the emergence of robots in many areas. It highlights the examples of Botlr, a hotel bellhop robot, Sedasys, a computer assisted sedation system or anaesthesiologist, Thai Delicious, a Thai food taster, and Kinect assisted devices.
Posted by Urbanomics at 1:26 PM