Is labor market regulations a binding constraint on Indian economy?

Even as the interest on reforming India's undoubtedly restrictive labor regulations mount, Pranab Bardhan has an excellent op-ed where he questions whether it is the "only or one of the main constraints" on the revival of India's manufacturing sector. All his arguments are compelling and I am inclined to agree that whether there are other even bigger constraints.

To the list of arguments posited by Prof Bardhan, there is more from the World Bank's Doing Business and Enterprise Surveys. The Enterprise Survey of business owners and top manager sin 4234 firms done in 2006 revealed the following snapshot of binding constraints faced by businesses (small, medium, and large) in both services and manufacturing. 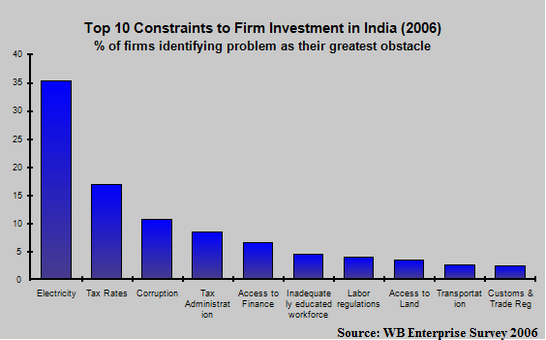 As can be seen, labor regulations come way down in the worry list for businesses. Infrastructure, especially electricity, tax rates, corruption, and credit come much before. Only 5% of firms identified labor regulations as the binding constraint.

Consider the following two graphics on the distribution of employees by firm size. The first graphic is on distribution of establishment sizes as a share of plants. It does not show a discontinuity anywhere. There is nothing to show that there is a sharp drop in the share of firms at the 100 employees mark, as would have been the case if the Industrial Disputes Act (IDA) were indeed a critical factor.

The second graphic is a distribution of establishment sizes as a share of all workers employed. Here too, not only is there is no discontinuity but also the share of employees appear to increase monotonically on both sides of the 100 mark.

Clearly, empirical evidence atleast does not appear to indicate any egregiously disruptive adverse contribution from the IDA or other legislations on the expansion of Indian manufacturing firms into medium and large firms with employment greater than 100.

None of this is to deny the undoubted damaging influence of our restrictive labor regulations. Their reform would surely contribute to improving the country's business environment. But to claim that labor market reforms can dramatically improve economic prospects, as argued by the likes of Aravind Panagariya, is to basically elevate anecdotes as objective evidence. Such anecdotes gain prominence from high-profile labor disputes and factory lock-outs.

There are two stories here. One, the overwhelming majority of Indian enterprises start small and informal, and remain like that. Since the typical firm starting operations is likely to start with far less than 100 employees, there is little reason to suggest that the IDA or the Contract Labor Act are important barriers to starting a business. This leads us to the second story of business expansion from small into medium enterprises. Here, the restrictions imposed by IDA surely adds a layer of regulatory cost and is a potential deterrent to growth of business, though far from a prohibitive one, leave alone being a binding constraint.

Update 1 (26/08/2014)
A recent KPMG-CII report on India's business environment examined, among other areas, the impact of labor market regulations. It finds that labor related approvals are not among the biggest obstacles, as cited by businesses, for starting a business.

Similarly, for running businesses, respondents claimed that skill gap and recruitment problems were a much bigger obstacle than the cost and time required to comply with labor regulations. 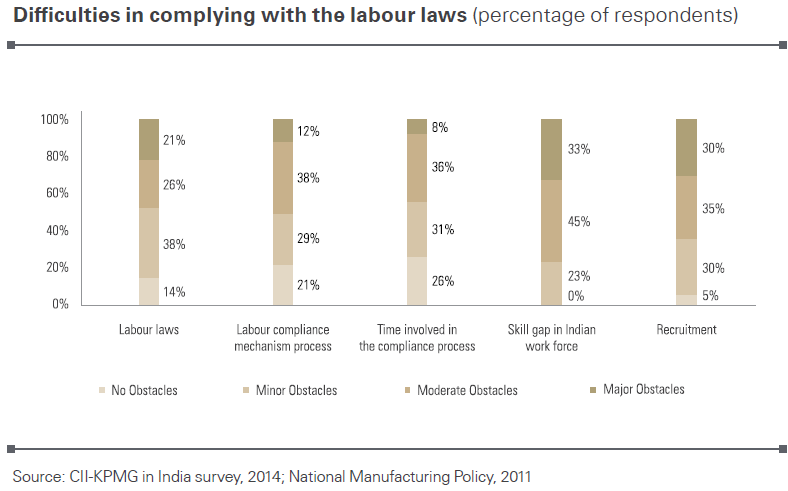 Finally, the regulation of employment - in terms of hiring and redundancy of workers and rigidity of working hours - as captured in the Doing Business Survey finds that India's employee redundancy dismissal requirements are far less onerous than most of its emerging market competitors. 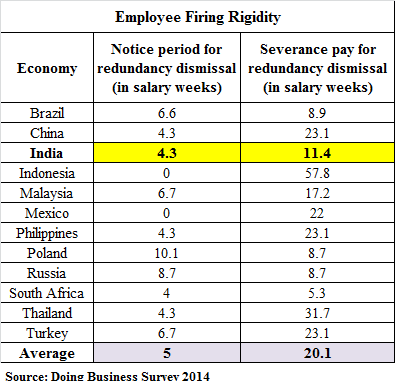