As India embarks on an ambitious program to rapidly expand its solar generation capacity to 20000 mW by 2022 under the Jawaharlal Nehru National Solar Mission (JNNSM), there are several important policy issues that need to be carefully addressed. I had blogged earlier about the uncertainty associated with the recent solar auctions due to the extraordinarily low tariffs quoted by successful bidders.

Another issue that needs to be addressed immediately involves the extent of policy protection permissible to local manufacturers without infringing on the WTO commitments. In recent months, Indian solar panel manufacturers have raised the pitch by accusing Chinese manufacturers of dumping and have called on the government to provide trade protection against them. The Indian firms are seeking anti-dumping duties on Chinese exports and also a 15% tariff on imports of thin-film solar panels (where American firms lead and which is the preferred choice for Indian developers). They complain that US and Chinese imports can be brought into the country tax-free, whereas Indian manufacturers have to pay duties on raw materials to make the same products. They also argue that Chinese firms benefit from cash grants, raw-materials discounts, preferential loans, tax incentives and cheaper currency.

The JNNSM provides for protection to domestic industry so as to catalyze the development of local panel and cell manufacturers. It mandates use of only indigenous crystalline silicon solar panels and solar cells. Furthermore, domestic content (equipment and technology) requirement will gradually increase under the mission. It exempts thin-film panels, which is more sophisticated and has limited Indian production capacity, from the indigenous production requirement. However, this local production requirement has not helped trigger much domestic manufacturing activity in solar sector.

Low-cost Chinese rivals like Suntech and Trina Solar Ltd (TSL) and US firms backed by preferential trade finance including First Solar, the world's largest thin-film panel maker, have reaped most of the equipment orders for 1,100 megawatts of plants to be built by January 2012. Indian suppliers such as Tata BP Solar India, Indosolar Ltd and Moser Baer India (MBI) have received almost no orders from developers building plants in India and are producing far below their factories’ full capacity.

India’s total manufacturing capacity is about 1,500 MW of panels and 500 MW of cells. Indsolar, India's biggest cell company, stopped production in June and has defaulted on 2.75 billion rupees ($52 million) of long-term bank loans as its business became "unviable". Cell prices have plunged 62% to about 52 cents just in 2011 alone on the back of intense Chinese competition and declining demand in Europe where governments have cut subsidies.

The global trade in solar power equipment making in particular and renewables in general have been marked by acrimonious accusations of unfair trade practices. For some time now, US manufacturers have been lobbying hard for imposing anti-dumping duties on Chinese imports. India's local production requirement for solar equipments has been criticised by US, EU and Japan. 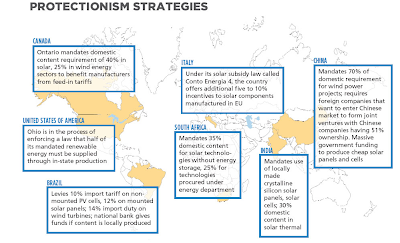 It is important that any national policy to facilitate the development of domestic industry are in conformity with India's WTO obligations. However, it would appear that the prevailing policy support to promote local production stand in contravention to WTO provisions. Unlike cash-rich China, where government provides direct subsidies to manufacturers, the fiscally strained Indian government has preferred to mandate local production requirement.

The WTO’s Article III: 4 of Trade Related Investment Measures (TRIMS) and General Agreement on Tariffs and Trade (GATT) III prohibits protectionism and discriminatory treatment against imported products and in favour of domestic products (the national treatment rule). It cannot mandate a private project developer to use only domestic content, though if government is the procurement agency, it can choose between domestic and imported content.

However, Article III 8 allows for payments of subsidies to domestic producers and consumers. This means that the government's purchase of electricity at high price and provision at a lower rate to the consumer is itself not violative of WTO treaty provisions. But, with the Chinese, this subsidy is provided directly to the producer. It is this exemption given to subsidizing domestic producers that has enabled Chinese exporters to avoid infringing WTO regulations. In 2010 alone, Chinese Development Bank gave $30 billion in low-cost loans to top five domestic solar panel manufacturers.

Interestingly, given that direct subsidy to its producers is its preferred method of industrial policy, China is able to skirt around the WTO agreement and massively subsidize its exporters. Such top-down direct subsidies and forcing them to compete for global market share is possible because China has deep pockets. Other countries cannot afford an industrial policy that subsidizes their domestic producers and therefore prefer to impose regulatory restrictions on foreign competitors and imports.

It is ironical that this provision of the WTO regulations which now the Chinese invoke with such devastating effect was itself the preferred route of industrial policy for the western economies for many years. Now the shoe is on the other feet. China has the comparative advantage with subsidizing its domestic manufacturers while the US and India are left to fend the Chinese onslaught with regulatory restrictions - higher tariffs or anti-dumping duties.

Given the changed dynamics of the global economy, it may now be in the interest of developed countries and emerging economies like India to propose renegotiating Article III 8 of the WTO treaty so as to restrain China's industrial policy. If tariff protection and subsidies are two sides of the same coin, then there is a strong case in favor of establishing some balance between Article III 4 and 8 of the WTO treaty.

Under the NSM, the government imposed domestic content requirement (DCR) on Si-C cells, which were being imported mainly from China. However, this did not lead to the establishment of any solar panel manufacturing capacity in India since the solar developers exploited a loophole which allowed imports of thin-film panels. These panels were not covered by the DCR and were imported in large volumes from US and Taiwan. More than 70% of projects under the Phase I used thin-film solar panels.
Posted by Urbanomics at 6:48 AM

That is so true. As an author and business man, I can relate to how you said "They complain that US and Chinese imports can be brought into the country tax-free, whereas Indian manufacturers have to pay duties on raw materials to make the same products". I hope more people discover your blog because you really know what you're talking about. Can't wait to read more from you!