I have blogged earlier about the fact that when controlled for demographic factors, Japan's economic performance since the nineties becomes much less dismal than what conventional wisdom would have it. What's more, assuming the working population as the measure of the country's productive capacity, it can be safely concluded that Japan has been successful in squeezing out the most from its shrinking working population.

A NYT op-ed by Eamonn Fingleton lays bare Japan's impressive achievements over the past two decades that belie the laughing-stock and pitiable image that the country has inspired in recent years.

In many areas, its achievements during the period are hugely impressive, especially given the challenges overcome - average life expectancy at birth grew by 4.2 years — to 83 years from 78.8 years — between 1989 and 2009, 4.8 years longer than Americans; despite starting out late, of the 50 cities in the world with the fastest Internet service, 38 were in Japan, compared to only 3 in the US; measured from the end of 1989, the yen has risen 87 percent against the US dollar and 94 percent against the British pound; unemployment rate is 4.2 percent, about half of that in the US; its current account surplus rose more than three-fold since 1989 to $196 billion in 2010, even as America’s ballooned to $471 billion from $99 billion in that time; and Japan has increased its exports to China more than 14-fold since 1989 and Chinese-Japanese bilateral trade remains in broad balance. 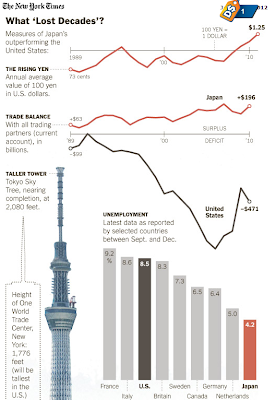 It is not just that Japan is chalking up impressive numbers, even in quality of life, it is a leader.

"An example is Japan’s eating-out culture. Tokyo, according to the Michelin Guide, boasts 16 of the world’s top-ranked restaurants, versus a mere 10 for the runner-up, Paris. Similarly Japan as a whole beats France in the Michelin ratings... the Japanese are consistently among the world’s earliest adopters. If anything, it is Americans who have been lagging... The Japanese are dressed better than Americans. They have the latest cars, including Porsches, Audis, Mercedes-Benzes and all the finest models. I have never seen so many spoiled pets. And the physical infrastructure of the country keeps improving and evolving."

However, as Paul Krugman, Matt Yglesias, and Noah Smith write, while there is considerable merit in the argument that Japan's demise has been overstated, it also cannot be denied that its economic performance since the early nineties has been dismal. Further, atleast some of the apparent successes of Japan may not be indicative of its economic strength.

But as Krugman writes, the most impressive achievement of Japan has been that its ability to mitigate the sufferings of its population despite the long-drawn period of economic stagnation. This statistic pointed out by Krugman about Japan's demographics is stunning,

Paul Krugman and Noah Smith have excellent posts explaining the demographics behind Japan's woes. When the relative GDP per working age adult is taken into consideration, Japan does far better than even the US in the 2000-07 period.
Posted by Urbanomics at 6:47 AM

Email ThisBlogThis!Share to TwitterShare to FacebookShare to Pinterest
Labels: Japan