A little late on this. The tariff quotes received in the second round of bids, concluded in first week of last December, for setting up solar projects under India's National Solar Mission (NSM) appears to indicate that solar energy prices will converge with conventional thermal power tariffs much sooner than expected. Or does it?

The lowest bid, in a reverse auction bid process, was for Rs 7.49 per unit, which is 50% lower than the benchmark tariff of Rs 15.39/unit fixed by the Central Electricity Regulatory Commission (CERC) and about 27% lower than winning bids in the first round of NSM auctions. The highest successful bid was only Rs 9.44/KWh and the average price for the winning bids for a total of 350 MW came to Rs 8.78/KWh (16.5 cents). Rajasthan was the preferred location for most bidders, with 295 MW out of the 350 MW located there. Germany, the world’s biggest solar-power user, pays about 17.94 euro cents (23 American cents) per KWh.

The projects are in the range of 5-20 MW capacity. The lower prices are attributed to the steep decline in prices of solar modules, which make up 50-65% of the total project cost. The successful bidders have to complete their projects in 13 months, failing which they face forefeit of large bank guarantees besides other steep fines. 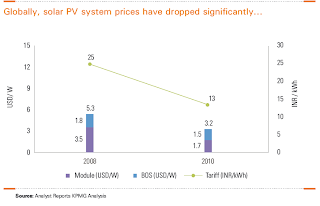 In the first phase of the NSM, a total of 28 Solar PV developers aggregating upto 150 MW and 8 Solar Thermal Developers aggregating upto 500 MW were selected based on maximum discount offered on CERC determined tariffs. The feed-in-tariff determined by CERC was Rs 17.91 for PV and Rs 15.31 for solar thermal. The cut off discounts were 515 paise and 297 paise for Solar PV and Thermal projects respectively.

The NTPC Vidut Vyapar Nigam (NVVN) is the nodal purchaser of solar power under the Mission. It then sells to distribution utilities who have to meet their mandated renewables target. In order to incentivize indigenous production facilities, the NSM mandates the use of only indigenous crystalline silicon solar panels and solar cells. The NSM was launched in 2010 and has an ambitious 20,000 MW target by 2022.

Official estimates on grid cost parity for Solar is around 2020. However, at this rate, it may happen much faster. KPMG's excellent recent report on the prospects of solar power in India foresaw rapid declines in prices of solar PV panels and forecast grid-parity by 2017-19. However, if the recent solar bids are any indication, even its best case scenarios may be outstripped and the grid-parity could occur much earlier. 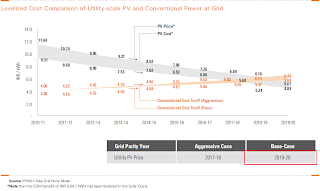 Some estimates point to a more aggressive convergence. The latest bid rates lend credence to this view. 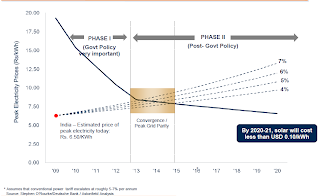 Since industrial and commercial retail tariffs are already in the 700 paisa range for many consumer categories like commercial, solar roof-top is viable even today.

But amidst the euphoria, there may be a need for closer examination. Is there are winner's case associated with these extraordinarily low bids? It not only goes completely against conventional wisdom in the industry circles, even with the sharply declining panel prices, but there are also signs of irrational exuberance associated with bubbles. The quoted prices are far lower than anything anywhere in the world. There are stories that the bids from even the first round of auctions are commercially unviable.

Many generators have questioned the wisdom of these successful bidders and claim that the projects are commercially unviable at these rates. It cannot be a coincidence that most of the larger solar players remained away from these bids. Another concern is the fact that out of the 30 short-listed bidders, almost 20 have had nothing to do with solar photo voltaic (PV) power. These are normally prima facie indications of bubbles.

In this context, lessons from the first phase may be instructive. However, the project commissioning prospects for projects approved under the first phase of the Mission wherein 28 projects of 5 MW each were awarded late in 2010 and due for completion by January 9, 2012, appears not very encouraging. Atleast 12/28 projects are certain to miss the deadline and incur penalties.

In this context, India's solar industry and policy makers would do well to pay heed to the cautionary tale from Spain, once the unrivalled European solar market. In 2007 the government announced a solar policy that guaranteed fixed electricity rates of up to 44 euro cents per KWh to all new solar panel projects plugged into the electrical grid by September 2008. In 2008, backed by generous feed-in-tariff (FIT) subsidies, there was a flood of investments and Spain accounted for more than 40% of the world's total solar PV installations. In just 2008, the country committed itself to solar FIT payments estimated at $26.4 billion.

Against a modest target of 400 MW, some 3000 MW of solar capacity were installed in Spain within 18 months. Then the bubble burst on the face of over-capacity and fiscal strains. The entire industry was devastated. Its faulty regulations have become a watchword for how government renewable-energy programs, poorly conceived, can go awry.

On the positive side, there are two features of the solar policy that is laudable and stands in contrast to the governance failures that characterize such policies. One, instead of plunging big time into solar generation, the government is right in testing the waters with such small calibrated auctions. It will help the government learn about the market and help design effective policies when the implementation is done on scale.

Second, the transparency associated with auctions is in stark contrast to the opacity that has been the source of numerous corruption scandals that have rocked the country in recent years. In fact, this has ensured that the government does not face the problems created by the overly generous FIT subsidies of Spain and other European countries. But this is also a reminder to those advocates of mindless auctions that the most effective allocation process is market-specific and is not always open-ended auctions.

Government of India has encashed the bank guarantee worth nearly Rs 2 Cr each on 14 project developers for failing to meet the commissioning deadline (January 9,2012) under the first batch of phase I of the JNNSM. After this, the developers are given two months' time to finish the project, and if they still don't, this would entail further loss of bank guarantee — thereafter, three months time is provided with penalties to complete the project, failing which the project would stand removed from the Mission. The total extension in this manner is up to six months beyond the scheduled date.

Under the first batch, 35 new projects were expected to generate 610 MW of solar power (140 MW of photovoltaic and 470 MW thermal) and grid connectivity was expected by January 2012.

A CRISIL report has estimate that for healthy equity internal rate of returns (IRRs) of around 15%, a levelised tariff of Rs. 9 per unit is necessary, assuming a capital cost of Rs 87-90 million MW, plant load factor of 19% and typical debt equity of 70:30, with borrowing costs of nearly 13%.
Posted by Urbanomics at 6:19 AM