Econ 101 teaches that "incentives matter", and there are numerous real-world examples of its application, none more so than with structured cash-incentives. So why not introduce performance-based pay for teachers?

A recent study of country-level performance-pay measures from the PISA-2003 (does not include India) international achievement micro data by Ludger Woessmann of the University of Munich estimated student-level international education production functions. After controlling for various cross- and within-country biases and other salary adjustments, he finds that math, science, and reading achievement scores in countries with performance-related pay are about one quarter standard deviations higher. He writes,

"The results of cross-country education production functions that extensively control for student, school, and country background factors suggest that students in countries that make use of teacher performance pay perform significantly better in math, science, and reading than students in countries that do not use teacher performance pay. The size of the association between use of performance-related pay and student achievement is about one quarter of a standard deviation on the math and reading tests and about 15 percent of a standard deviation on the science test.

Given the well-established nature of teacher bonuses in many countries, these associations are likely to capture general-equilibrium effects of performance-related pay which are likely to combine long-term incentive effects of motivating current teachers with sorting effects of changing the pool of applicants for the teaching profession." 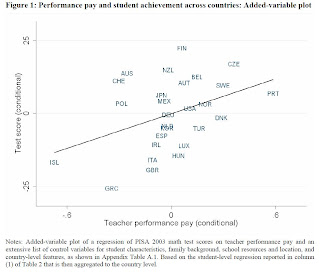 I had blogged earlier about a study by Prof Karthik Muralidharan about evaluation of incentives-based teacher performance in 500 government primary schools in Andhra Pradesh which found that "there could be significant gains from moving to a system of hiring teachers on fixed-term contracts and then using performance measures to pay bonuses on an ongoing basis and to inform the tenure decision after a longer period of performance measurement".

I am inclined to believe that any teacher performance-based pay system, while unobjectionable at a theoretical level, may be very difficult to implement, both for political and administrative reasons, in the prevailing environment in countries like India. While it may succeed in a limited area and time, it may not yield the desired results with a more ambitious scope and pan-Indian area of implementation.
Posted by Urbanomics at 9:33 AM

I too am of the opinion that it may not work out for the simple reason that there is no objective / measurable base line that could compare the set of students in different classes tutored by different teachers.....atleast the unions would say. When it comes to education, may be a teacher in a school that gets children from slum works harder than his counter part in a school in a well off colony.....Better way of improving education would be to invest in better teaching methodologies which would make it more student centered. For example, may be we can make every student in a class room write the names of each and every other student in his class which would definitely ensure that he learns all alphabets and pronounces it correctly....just a thought.

thanks for your comments...
good example, a series of such small strategies generate good learning outcomes.

measurement of learning outcomes, to a reasonable degree of approximation (and there are tools now available), is one of the biggest immediate requisites in education sector, fundamental to any interventions aimed at quality-related improvements that are necessary.