Assessing the impact of TARP and ARRA

Alan Blinder and Mark Zandi have a new paper that seeks to estimate the impact of the various credit, monetary and fiscal policy stimulus programs in the US. Their assessment is conclusive, "We find that its effects on real GDP, jobs, and inflation are huge, and probably averted what could have been called Great Depression 2.0."

When we divide these effects into two components—one attributable to the fiscal stimulus and the other attributable to financial-market policies such as the TARP, the bank stress tests and the Fed’s quantitative easing—we estimate that the latter was substantially more powerful than the former. Nonetheless,

Their overall conclusion is that without the Wall Street bailout, the bank stress tests, the emergency lending and asset purchases by the Federal Reserve, and the Obama administration’s fiscal stimulus program, the nation’s gross domestic product would be about 6.5% lower this year. In addition, there would be about 8.5 million fewer jobs, on top of the more than 8 million already lost; and the economy would be experiencing deflation, instead of low inflation.

They estimate the total direct cost of the recession at $1.6 trillion, and the total budgetary cost, after adding in nearly $750 billion in lost revenue from the weaker economy, at $2.35 trillion, or about 16% of GDP.

They conclude that the financial stabilization measures, TARP, have had a relatively greater impact than the stimulus program (ARRA). If the fiscal stimulus alone had been enacted, and not the financial measures, they concluded, real GDP would have fallen 5% last year, with 12 million jobs lost. But if only the financial measures had been enacted, and not the stimulus, real GDP would have fallen nearly 4%, with 10 million jobs lost. They find that the fiscal stimulus alone raised 2010 real GDP by about 3.4%, held the unemployment rate about 1½ percentage points lower, and added almost 2.7 million jobs to US payrolls.

These findings are consistent with those made by CBO and other agencies. Earlier posts on the impacts of ARRA and TARP here, here, and here, point to much the same conclusions. Here is a summary of the findings of Zandi and Blinder.

The Federal Reserve undertook massive expansion of its balance sheet as part of unconventional moneatry policy response by acting as the lender, buyer and insurer of last resort... 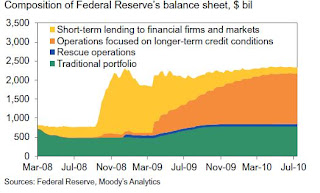 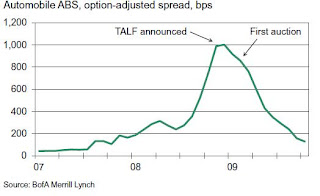 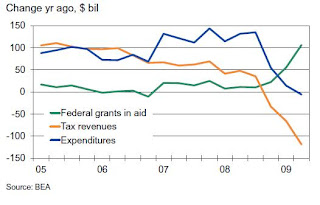 ... the tax cuts propped up consumer spending to some extent atleast... 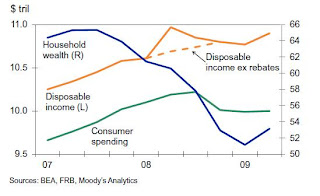 ... and the cash for clunkers program was a runaway success. 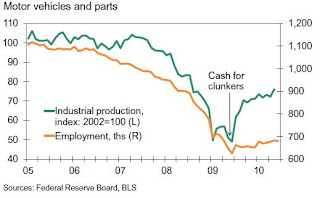 Macroeconomic Advisers finds that (pdf here), compared to an indefinite extension, impending expiration of numerous prior tax cuts would trim 2011 growth by 0.9 percentage points, while only allowing an increase in taxes for high-income individuals and families would trim growth 0.2 percentage points.

The graphic below show the unemployment rate changes under the three simulations - indefinite extension of the current tax code, full sunset of the earlier tax cuts as envisioned under current law, and the intermediate case of the MA forecast where only high-income individuals and families are assumed to see their taxes rise. 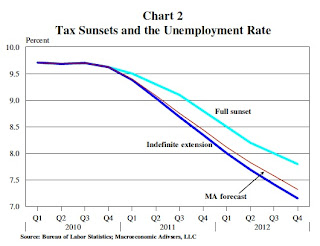 As the graphics below from CBPP shows, both GDP would have been lower and unemployment higher without the ARRA 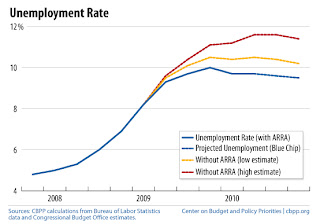 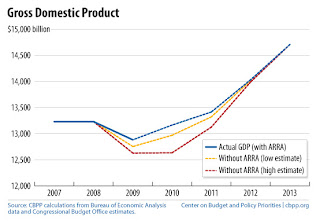 CBO's latest assessment of the impact of ARRA on output and unemployment - raised the level of real (inflation-adjusted) GDP by between 1.7-4.5%; lowered the unemployment rate by between 0.7-1.8 percentage points; increased the number of people employed by between 1.4-3.3 million; and increased the number of full-time-equivalent (FTE) jobs by 2.0-4.8 million compared with what those amounts would have been otherwise. It also writes that the effects of ARRA on output and employment are expected to gradually diminish during the second half of 2010 and beyond.

A San Francisco Fed study finds that the ARRA spending created or saved about 2.0million jobs, or 1.5% of pre-ARRA employment, in the total nonfarm sector by early 2010, though its impact tapered off quickly to essentially zero by August 2010. David Leonhardt writes that "judging the stimulus by jobs data reveals success".

The Fed released papers revealing the true extent of its involvement under the TARP. From December 2008 until March 2009, the Fed purchased some $1.7 trillion in mortgage-related assets and Treasury securities to lower long-term interest rates. From March 2008 to May 2009, the central bank extended a cumulative total of nearly $9 trillion in short-term loans to 18 different financial firms — under a program called the Primary Dealer Credit Facility. The ECB and nie other central banks (Australia, Britain, Denmark, Japan, Mexico, Norway, South Korea, Sweden and Switzerland) drew on the Fed’s currency swap lines to support dollar-financed money markets in Europe.

See also this excellent assessment of the TARP and other financial bailouts by Gretchen Morgenson.

The CBO's latest estimates (pdf here) show that ARRA’s policies had the following effects in the fourth quarter of calendar year 2010 - raised real (inflation-adjusted) gross domestic product by between 1.1-3.5%; lowered the unemployment rate by between 0.7-1.9 percentage points; increased the number of people employed by between 1.3-3.5 million; increased the number of full-time-equivalent (FTE) jobs by 1.8-5 million compared with what would have occurred otherwise.

The latest CBO estimate of the impact of ARRA (blue line showing the actual real GDP while the red line shows what would have happened in the absence of the ARRA). 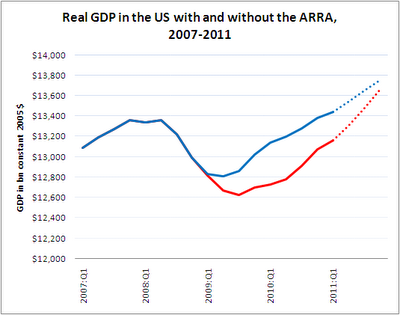 CBPP has the latest estimate of the impact of ARRA. The CBO estimates that GDP in the fourth quarter of 2011 was between 0.2 and 1.5 percent larger than it would have been without the Recovery Act. 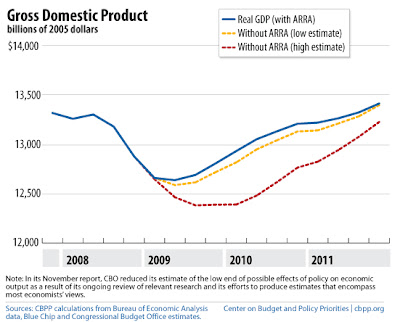 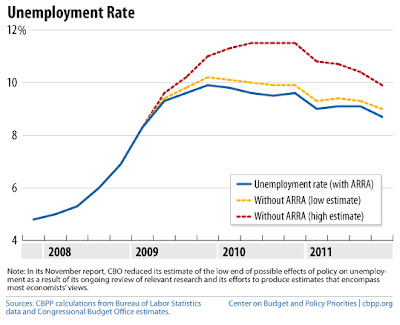 Excellent set of graphics from the US Treasury that highlights the response to the financial crisis and recession.

Dylan Matthews has this nice listing of all studies assessing the impact of the fiscal spending measures. The overwhelming evidence is that the stimulus measures have worked.

Posted by Urbanomics at 7:35 AM