The steep increases in the price of commodities in the 2006-08 period attracted much debate and was variously attributed to massive rise in demand from China and other emerging economies, diversion of resources for biofuels production (notably maize in the US and edible oils in Europe), adverse weather conditions, trade distorting policies like export bans, financial market speculation in commodities derivatives and so on.

In this context, a working paper (via Mark Thoma) published by the World Bank and written by John Baffes and Tassos Haniotis find,

"We conjecture that index fund activity (one type of 'speculative' activity among the many that the literature refers to) played a key role during the 2008 price spike...By investing across the entire range of commodity futures, index‐based investors appear to have inflated food commodity prices... Biofuels played some role too, but much less than initially thought. And we find no evidence that alleged stronger demand by emerging economies had any effect on world prices (the combined average annual increment in consumption, both growth rates and absolute increments, was lower in the years of the price surges, 2002‐08, than in the preceding period 1995‐2001).

They argue that instead of claiming that commodity price speculation causes commodity price variations in general, it should be explored whether the flight of new capital into commodity indices (as part of diversification strategies of fund houses in their search for non co-related assets) contributed to the specific instance of the recent spike in commodity prices. They write

"Investment in commodities is a relatively new phenomenon, and funds have to date flowed mostly in, not out, implying that some markets may have been subject to extrapolative price behavior; that is, high prices leading to more buying by investment funds, in turn leading to even higher prices, and so on. In fact, that may have been the case with the sovereign wealth funds, whose revenue comes from commodities, which in turn it is invested in commodities... index funds invest on the basis of fixed weights or past performance criteria, and hence investment often behaves differently from what market fundamentals would dictate... the large size of these funds compared to commodity markets may exacerbate price movements."

In other words, while commodity derivatives market activities are unlikely to significantly affect long-term price trends (which will be determined by market fundamentals), they can exacerbate the length and amplitude of price cycles and thereby induce higher price variability. The volatility of 2006-08 was only the latest instance of this.

Further, on examination of the long-term trends in the commodity markets, they find strong links between energy and non-energy prices and co-movement among prices of food commodities (say, increased demand for maize for the production of ethanol will affect the wheat market, especially through reallocation of land resources), the strength of which increased considerably during the recent boom. This naturally implies that "policy changes in one market may affect other markets". They write,

"High energy prices coupled with the high energy intensity of agricultural commodities imply that developments in non‐energy (especially food) markets will depend strongly on the nature and degree of the price links between energy and non‐energy commodities... energy enters the aggregate production function of most primary commodities through the use of various energy‐intensive inputs and, often, transport of outputs over long distances... it is important not to analyze commodity markets in isolation from one another, because the impact of events that seemingly affect one market will eventually be equalized among most commodity sectors."

They also argue that the long-term evolution of the commodity markets is characterized by "price variability overwhelming price trends", so much so that "the average price does not exist in the statistical sense (i.e., prices exhibit non‐stationary behavior), and the conclusions reached about trends depend on what time period is chosen for the analysis". In view of this, they write about managing price spikes

"Following the recent food price spike, there have been calls for policy actions, essentially aiming to alleviate the impacts of price spikes on developing countries, through reliance on some level of buffer stocks (whether physical or virtual). History has not been kind to collective measures designed to prevent the decline or reduce the variability of prices. What type of measures would be more pertinent to mitigate any undesired effects of price variability would depend on the better understanding of the factors that not only affect, but also potentially alter, long-term price trends."

The overwhelming salience (and near inevitability) of price volatility is a strong enough reason to have adequate buffer stocks in place to ensure food security to those most vulnerable to such volatility. As evidence of the apparent lack of any clear direction and trends, they write

"Between the second half of 2007 and the first half of 2008 production of petroleum increased from 85.8 million barrels per day (mb/d) to 86.8 mb/d. Consumption fell from 86.5 mb/d to 86.3 mb/d. Prices should have fallen. In December 2007, crude oil averaged US$ 90/barrel while in June 2008 it averaged US$ 132/barrel, almost 50% up. Recent figures on spare capacity give an equally perplexing picture. During 2009, OPEC spare capacity stood at 6.3 mb/d while petroleum prices averaged $62/barrel. However, similar capacity levels during the early 2000s were associated with $20/barrel. Stocks of key food commodities are 20% higher in 2009/10 compared to 2007/08; yet the nominal food price index averaged 23% higher in December 2009 compared to a year ago, rather surprising given that an often cited reason for the food price spike of 2008 was low inventories."

Between 1975‐76 and 2000‐01, world food prices declined by 53% in real US‐dollar terms, before the current price uptrend started in energy, metals, and agriculture, though food and agriculture prices increased less than all other commodity prices. 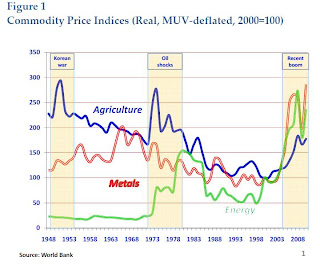 Between 2003 and 2008, nominal prices of energy and metals increased by 230%, those of food and precious metals doubled, and those of fertilizers increased fourfold. 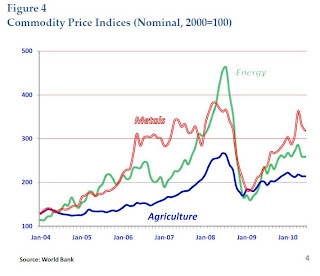 Last decade, a combination of adverse weather conditions and the diversion of some food commodities to the production of biofuels led to global stock‐to‐use ratios of several agricultural commodities falling to levels not seen since the early 1970s, thereby further accelerating the price increases. 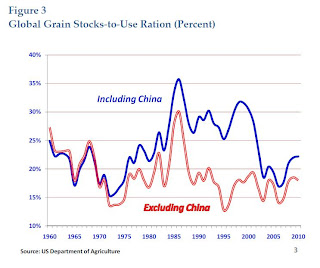 Posted by Urbanomics at 6:48 AM

Perfect. It is not logical or possible to control commodity prices. The solutions, however, could be focused in minimizing the negative side effects.

(The word commodity is too broad. Consider petrol. When petro prices goes up the producer gets a good share. When rice prices goes up, farmer hardly get any thing.)

Thanks for your nice posting keep it up, I am always looking for such types of enormous information on Commodity Market. This type of communications are really very helpful in upgrading and improving your trading & investment skill. For more such type of information, Kindly Visit: http://www.smcindiaonline.com/commodities-trading.aspx

You wrote a Fantastic post on commodity market. You also provide useful information and market updates to traders. Now I Will be Waiting for the next update......Nifty Tips