The New York City taxi medallion (fastened to the hoods of all taxis), or permit to run taxis on the city roads, is a classic example of a cartel. However, unlike the regular cartels, a government agency, the New York City Taxi and Limousine Commission (TLC) which is responsible for licensing and regulating New York City's medallion, is formally administering this one. And amidst the wreckage of the sub-prime meltdown and the Great Recession, medallion prices have remained amongst the steadiest of asset classes. 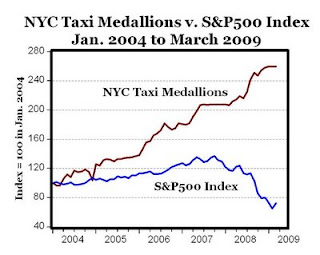 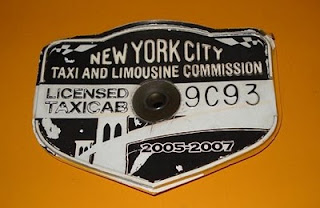 The price of a an individual medallion (see the price data here!) reached doubled to a record-high of $588,000 in February since 2004, while that of a corporate-owned medallion reached a another record high $779,000 in January. In fact ownership of this asset has yielded above-market returns of 20.75% per year for corporate medallions and 15.32% for individual medallions. 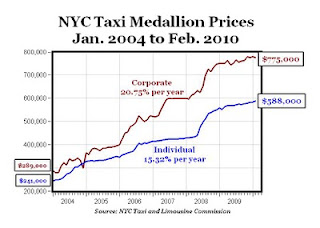 In 1937, the number of taxicab medallions was limited to those that existed at that time and by late 1940s this number had settled at 11,787. However, since 2003, State and local legislation have allowed the Taxi and Limousine Commission (TLC) to sell new medallions, bringing the current total to 13,257 yellow medallion taxicabs operating in New York City. In a ratio set by law, 40% of the total medallions are designated for individual, as opposed to corporate, ownership. Individual owners are required to drive at least part time, while corporate owners have the option of hiring an agent to lease the medallion full time for up to $800 a week.

If there are any derivative instruments based on the medallions, I would like to put my money there!!

Felix Salmon on the rise and rise of tax medallions,

Posted by Urbanomics at 7:17 AM

An entire website has popped up dedicated to taxi medallions as an investment (www.fareinvestor.com), with information on New York, Chicago, Boston and New Orleans. It looks like these markets are lucrative across the country, although New York is by far the biggest and best. A company called Medallion Financial (NASDAQ traded under the ticker "TAXI") has been around for years and specializes in lending to taxi medallion owners. Average borrowing rates in New York are about 5.90%.