Standard solid waste management techniques to dispose off municipal garbage include landfill dumping, composting of bio-degradable materials, biomethanization of biological materials, and incineration. All of these disposal techniques involve significant amount of pollution and are therefore done away from habitations. Strong public opposition to installation of such plants near residential areas are therefore natural. For this reason, despite the theoretical possibility of municipal garbage emerging as a clean alternative fuel (waste-to-energy), it has remained unexploited to potential in most parts of the world.

In this context, Times reports of municipal and industrial garbage incinerating plants abutting housing colonies in Europe, which are so clean that many times more dioxin is now released from home fireplaces and backyard barbecues than from such incinerators. Unlike the smoke-belching models of the past, today's waste-to-energy plants have arrays of newly developed filters and scrubbers to capture the offending chemicals — hydrochloric acid, sulfur dioxide, nitrogen oxides, dioxins, furans and heavy metals — as well as small particulates.

Across Europe, there are about 400 plants, with Denmark, Germany and the Netherlands leading the pack in expanding them and building new ones. Denmark alone now has 29 such plants, serving 98 municipalities in a country of 5.5 million people, and 10 more are planned or under construction. There plants are placed in the communities they serve, no matter how affluent, so that the heat of burning garbage can be efficiently piped into homes. Further, to increase public acceptance, some of the newest plants are encased in elaborate outer shells that resemble sculptures. 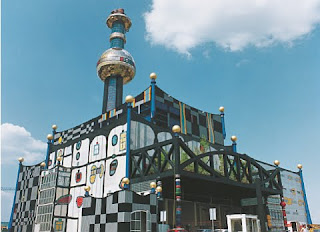 Waste-to-energy plants score over landfills in many ways. Primarily, the methane gas emitted by landfills is about 20 times more potent than carbon dioxide, the gas released by burning garbage. A study by the US EPA in 2009 found that even the state-of-the-art landfills which collect the methane that emanates from rotting garbage to make electricity churn out roughly twice as much climate-warming gas as waste-to-energy plants do for the units of power they produce. It also found that although new landfills are lined to prevent leaks of toxic substances and often capture methane, the process is highly inefficient. Secondly, it has been found (by the same EPA study) that waste-to-energy plants produce nine times the energy as landfills for the same amount of waste disposed off.

The graphic below compares the relative effectiveness of landfills, which are widely used in the US (and across developing countries like India), and incinerators.

The preference for landfills in the US comes from the presence of abundant landmass, which makes it easier and cheaper to dispose off garbage in this manner. For exactly the opposite reason, landfills are unattractive in Europe, forcing them into costlier but more environment friendly alternatives like incinerators. In fact, the European Union severely restricts the creation of new landfill sites, thereby promoting waste-to-energy plants. Cities in countries like India, which too face similar land scarcity, also may have to adopt such techniques to dispose its garbage.

Advocates of recycling strongly oppose waste-to-energy plants on the grounds that it disincentivizes recycling (though the example of Germany, the world leader in recycling, with its large number of incinerators of non-recyclable waste, points otherwise). They advocate measures that move towards "zero-waste" instead of spending energy to burn the garbage after it is generated.

However, such best-practice zero-waste strategies are invariably the enemy of the practical and possible. Instead of rejecting all second-base alternatives on the grounds that they are not as efficient as the "best practice", a more realistic option would be adopt a mix of all these methods to effectively dispose off municipal solid waste.

Though there are a few experiments with waste-to-energy (with municipal garbage) in India, I am not aware of any that have actually yielded the desired results (over a long enough period) to serve as examples worthy of emulation. In fact, the present policies may actually be supporting fly-by-night developers, out to knock off the generous upfront subsidies offered by the Ministry of Nonconventional Energy Sources (MNES) and also the massive land extents often allotted to such plants on the city limits.

Far from becoming a financial burden, the prevailing conventional wisdom in India is that municipal bodies can make money from solid waste disposal, especially from waste-to-energy plants (the possibility of accessing carbon credits under the Kyoto Protocol only adds to the impression). Accordingly, cash-strapped municipal bodies are loath to spend much on effective garbage collection, transportation and disposal, and look for quick-fix solutions in private operators for their solid waste disposal.

State and central government policies are structured with this in mind, without consideration for the fact that effective solid waste disposal is very expensive. For example, New York City paid $307 million last year to export more than four million tons of waste, mostly to landfills in distant states. In 2009, a small portion of New York's trash was processed at two 1990-vintage waste-to-energy plants in Newark and Hempstead, NY, owned by a private company, Covanta, and the City paid $65 a ton for the service. And incidentally, this is the cheapest available way for New York City to get rid of its trash.

Waste-to-energy plants do involve large upfront expenditures, that cannot be made without having access to assured municipal garbage and regulatory certainty. Instead of upfront subsidies, a more effective subsidy to such plants may be by way of feed-in tariffs (or generous tariff incentives) similar to that proposed under the National Solar Power Policy. This removes the risk of developers knocking off the MNES incentive and fleeing after some time and incentivizes the developers to generate as much electricity as possible, so as to maximize his returns. Municipal laws should also be revised to provide greater clarity to developers and ULBs (for example on the issue of assuring the supply of solid waste to such plants, etc) on the terms for sanctioning and setting up of such waste-to-energy plants.

See also this debate on MSW disposal in the US.

Update 1 (28/4/2010)
Normal Steisel makes the case for converting New York's garbage into energy. Rose George advocates generation of electricity from sewerage, by anaerobic digestion of the sludge and using the methane so produced to run turbines.
Posted by Urbanomics at 6:05 AM

""Municipal laws should also be revised..(for example on the issue of assuring the supply of solid waste to such plants, etc) on the terms for sanctioning and setting up of such waste-to-energy plants. ""

ULTIMATELY, the municipality would be better adviced to ensure that the financial model of the waste handling system being proposed by the enterpreneur is sound. In case the model is unworkable, it would invariably close down, like has happened to all the plants in this country. The tendency in all municipal bodies is to consider the private enterpreneur to be an outsider and not as a partner. This hands off approach combined with unwillingnesss to spend on disposal has resulted in all such efforts failing so far.

Too a certain extent there is no right or wrong answer since we harm the environment indefinitely, no matter how we choose to dispose of it.