The emerging market in natural gas

The massive investments in the exploration of natural gas over the past decade has become a potentially game-changing development in the global energy market. Apart from becoming a cheap and environment friendly (gas-fired power stations emit about half as much carbon as the cleanest coal plants) competitor to carbon fuels, it also threatens to turn on its head the century-old, petroleum-politics driven, global geo-politics.

Technological breakthroughs in recent years like hydraulic fracturing ("fracing", pronounced "fracking" involves blasting a cocktail of water, sand, chemicals and other materials into the underground rock formations to shatter it into thousands of pieces, creating cracks that allow the gas to seep to the well for extraction) and horizontal drilling (allows the drill bit to penetrate the earth vertically before moving sideways for hundreds or thousands of metres), have allowed exploration in hitherto unexploitable sources like underneath hardy shale-rock formations, coal-bed methane and "tight gas". However, with expanding explorations there have been serious environmental concerns that processes like hydraulic fracturing release toxic chemicals to pollute the ground water.

These unconventional sources today promise supply of massive quantities of natural gas for the foreseeable future. The International Energy Agency (IEA) estimates the global total to be 921 trillion cubic metres, more than five times proven conventional reserves. Further, since shale is almost ubiquitous, the IEA says China and India could have "large" reserves, far greater than the conventional resource. Exploration is also under way in Austria, Germany, Hungary, Poland and other European countries, with the big oil majors joining the fray.

Adding to the discoveries have been the excess availability of Liquefied Natural Gas (LNG) transport logistics - its importers with the infrastructure to receive and regasify LNG can now easily tap the global market for spot cargoes. The recession has dampened demand from Japan and South Korea, the leading LNG buyers, and Qatar, the world’s LNG powerhouse, has spent the past decade ramping up supplies aimed at the American market.

Further, LNG will grow increasingly abundant as new projects due to come on stream this year add another 80m tonnes to annual supply, almost 50% more than in 2008. While Qatar itself has 23.4 million tonnes per annum (mtpa) under construction that will take it total to 77 mtpa, Australia has 20 mtpa under construction and another 59-110 mtpa planned that could make it the market behemoth. Nigeria and Iran, too, have huge capacities of 40-50 and 72-78 mtpa on the cards.

According to the International Energy Agency, overcapacity in gas pipelines and liquefied natural gas terminals will increase to about 250 billion cubic meters by 2015 as demand remains subdued. That is four times the level of spare capacity in 2007.

This proliferation of discoveries and prospects of an explosion in supplies over the decade has surely changed the trade economics of natural gas and the bargaining power of the big exporters like Qatar, Russia and Australia. Strong prospects of domestic (in potential gas importers) discoveries and too much capacity chasing the demand, means that many exploration (for example, Gazprom postponed its Shtokman gasfield in the Barents Sea), pipelines (Nord Stream, Gazprom’s flagship project to export gas directly to Germany through the Baltic Sea) and LNG projects (Australia's LNG terminals to export gas to the now relatively less interested China) which looked attractive till a couple of years back are now looking bleak. The Energy Information Administration, the statistical arm of America’s Department of Energy, predicts decades of relatively weak gas prices.

The vast capacity addition in recent few years, huge discoveries of natural gas trapped in hardy shale-rock formations in the US (Texas and Canadian border) in 2007 and 2008 (equivalent to 30 years of domestic gas production in the last five years), and the impact of a recession induced dip in demand in the large traditional developed economy markets, have driven North American natural gas prices to around $5 per million British thermal units (mmBtu) from its highs of $13 per mmBtu in mid-2008.

A recent McKinsey report forecasts that natural gas demand in India will almost double from the current 166 mmscmd (million metric standard cubic metres daily) to 310-320 mmscmd by 2015 if the price can be contained at $10-11/mmBtu (at customer gate), making the Indian market as large as that of Japan if not slightly larger by 2015, and second only to China which is expected to see demand of 452 mmscmd by 2015. Petronet LNG pegs domestic demand at 271 mmscmd by 2017 and expects it to touch 322 mmscmd only by 2022. 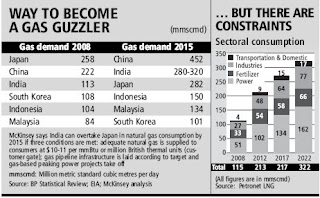 This emerging global context therefore offers ample opportunities for India to leverage its a massive market potential and strike beneficial long-term deals. The clear intent shown by the government to dismantle the administered price mechanism (APM) on natural gas will only increase the attractiveness of Indian market for suppliers. A recent Business Standard article pointed to estimates that India can consume quite a lot of LNG at $ 6 mmBtu but much less at rates that are in the $8-10 mmBtu. Incidentally, the government has fixed gas from the Reliance’s DC-6 field fixed at $4.20 per mmBtu.

India's massive power generation capacity addition program and the persisting 12-15% peak power deficit can be considerably addressed by tapping long-term supplies that leverage the current market trends to strike deals at attractive terms. In view of the imminent decoupling of gas and oil prices in the years ahead, care should be taken to ensure that such deals do not link gas supply prices to global oil prices. Apart from this, India will also need to develop LNG terminals to facilitate imports of these supplies.

With hydrofracking, a well can produce over a million gallons of wastewater that is often laced with highly corrosive salts, carcinogens like benzene and radioactive elements like radium, all of which can occur naturally thousands of feet underground. Other carcinogenic materials can be added to the wastewater by the chemicals used in the hydrofracking itself. The wastewater which is sometimes hauled to sewage plants not designed to treat it and then discharged into rivers that supply drinking water, contains radioactivity at levels higher than previously known, and far higher than the level that federal regulators say is safe for these treatment plants to handle.

NYT points to two new studies that question the wisdom that natural gas can considerably offset global warming. They argue that it is "likely to do more to heat up the planet than mining and burning coal". The unconventional shale gas production, which accounts for nearly a quarter of total production in the United States and is expected to reach 45 percent by 2035, is thought to emit roughly half the amount of carbon dioxide as coal and about 30 percent that of oil.

However, as the article says, this may conceal larger emissions over its entire production life cycle — that is, from the moment a well is plumbed to the point at which the gas is used. In fact, they write that when everything is factored together, the greenhouse gas footprint of shale gas can be as much as 20 percent greater than, and perhaps twice as high as, coal per unit of energy. The report writes,

"The problem, the studies suggest, is that planet-warming methane, the chief component of natural gas, is escaping into the atmosphere in far larger quantities than previously thought, with as much as 7.9 percent of it puffing out from shale gas wells, intentionally vented or flared, or seeping from loose pipe fittings along gas distribution lines. This offsets natural gas’s most important advantage as an energy source: it burns cleaner than other fossil fuels and releases lower carbon dioxide emissions... Methane leaks have long been a concern because while methane dissipates in the atmosphere more quickly than carbon dioxide, it is far more efficient at trapping heat."

Natural gas is already the principal source of heat in half of American households.

See also this report which tries to answer some of the criticism of the pollution effects of unconventional natural gas.
Posted by Urbanomics at 6:32 AM