Quantitative easing in US and Japan

John Taylor has two nice graphs comparing the monetary base expansions in Japan and US as part of the quantitative easing (QE) programs of the respective central banks, Bank of Japan and the Fed. 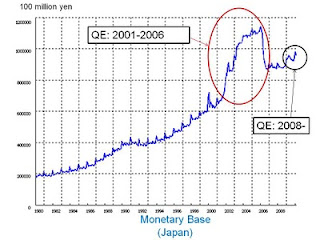 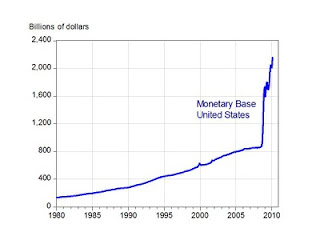 The BoJ's QE during the 2001-06 period increased the monetary base from about 65 trillion yen to 110 trillion yen, or by about 70%. The exit was swift and went without any volatility in the markets. Though the post-2008 QE was small compared to the 2001-06 QE, the persisting deflation makes any exit from monetary expansion difficult.

In contrast, the monetary base in the United States (to finance its purchase of mortgage backed securities, bailouts of AIG and Bear Stearns and other loans and securities purchases) increased by twice as much in percentage terms (140%) and much more quickly (especially in the last few months of 2008) in the aftermath of the sub-prime mortgage bubble bursting. While the Fed entered into QE when the interest rate target was 2%, the BOJ started QE when the interest rate was already essentially zero at 0.1%.

Prof. Taylor feels that the BoJ's quick and relatively problem-free exit from QE suggests that a quicker exit for the Fed might notcause too many problems.

However, I feel that he may be asking the wrong question here. The debate now should not be about the problems with managing an exit, but whether it is time yet (given the weak economy, business investment and consumer demand, and continuing threat of deflation) to roll back the monetary expansion.
Posted by Urbanomics at 5:50 AM