The Fed's unconventional monetary policy actions involving buying up assets (mainly mortgage backed securities issued by Fannie Mae and Freddie Mac and assets of Bear Stearns and AIG) and extending loans to prop up ailing sectors has dramatically swelled the Fed's balance sheet to record proportions. At $2.2 trillion, it has nearly tripled since the summer of 2007 when the extraordinary measures were initiated culminating in lowering interest rates to nearly zero by December 2008. 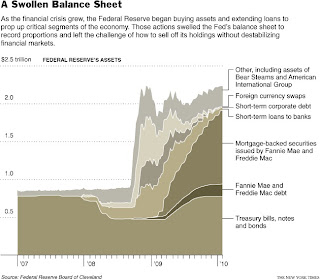 I had blogged earlier here and here about the challenge now to manage the exit from this expansion. This assumes increasing importance as the economy starts recovering and normalcy is restored into the credit markets encouraging bankers to increase their credit disbursements, leaving open the danger of the excess reserves finding its way into the market, rapidly expanding the broad money supply, and stoking inflationary pressures.

The Fed's purchases of these assets and credit expansion was essentially financed by creating (printing) new money which then found its way into the balance sheets of individual banks. The banks in turn parked the extra liquidity as reserves with the Fed, beyond their statutory reserve requirements. The Fed therefore now holds $1.1 trillion in excess reserves that the banks can demand when they wish.

The Fed has been empowered since October 2008 to pay an interest rate on excess reserves, though this will have the effect of reducing the amount that the Fed turns over to the Treasury each year. This rate on excess reserves could act as a floor rate and the discount rate (rate at which the central bank lends short-term to banks, repo rate in India) would act as a ceiling, with the federal funds rate (interest rate banks charge each other for overnight loans, call money rate in India) floating between. Many central banks, including those of UK and Canada, are already empowered to pay interest on such reserve deposits.

The easiest exit strategy is to provide interest on the excess reserves created as the Fed gobbled up mortgage-backed securities and Treasury notes and bonds during the financial crisis. Given the low prevailing inter-bank lending rates, the Fed can encourage the banks to continue parking their reserves with the central bank by raising the interest paid on excess reserves (presently 0.25%).

The other instruments to drain off excess liquidity include reverse repurchase (reverse repo) agreements by which the Fed would sell securities from its portfolio with an agreement to buy them back at a slightly higher price at a later date; Treasury or Fed could offer term deposits, analogous to the certificates of deposit banks offer to customers; the Treasury could sell bills and deposit the proceeds at the Fed; the Fed could sell some of its long-term securities, including those backed by mortgages, taking more money out of the system.

In any case, many of the unconventional policy actions are due to be wound up. Two of the biggest — the Fed’s purchase of $1.25 trillion of mortgage-backed securities and of about $175 billion in debts guaranteed by Fannie Mae, Freddie Mac and Ginnie Mae — are to be completed by March 31.

In a recent speech Ben Bernanke outlined the Fed's exit strategy by claiming that the "FOMC anticipates that economic conditions, including low rates of resource utilization, subdued inflation trends, and stable inflation expectations, are likely to warrant exceptionally low levels of the federal funds rate for an extended period." He also reassured that the Fed had the tools to reverse, at the appropriate time, the very high degree of monetary stimulus.

David Altig has a nice discussion on the challenge of policy accommodation to follow the spiking of the punchbowl and the party.

On the assets side, the increase in the balance sheet has been almost entirely due to the Fed's purchase of agency (Fannie and Freddie) debt in the form of mortgage-backed securities (MBS). In fact the Fed is holding about the same amount of treasuries as it did prior to the financial crisis. In other words, the Fed's actions to purchase securities has merely resulted in a change of ownership.

On the liabilities side of the balance sheet, the monetary base has expanded exponentially. 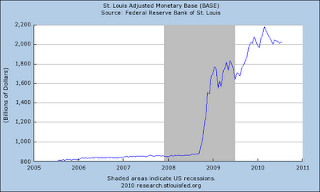 See this excellent explanation from David Andolfatto.
Posted by Urbanomics at 5:12 AM