The TBTF subsidy and banking economies to scale

Andrew Haldane has put a figure on the "too-big-to-fail subsidy" - the cheap borrowing costs of the world's largest financial institutions in view of the widespread belief among investors that, even with clear resolution and bankruptcy regulations, their governments will not allow them to fail. The subsidy, he says, amounts annually to a whopping $700 bn. 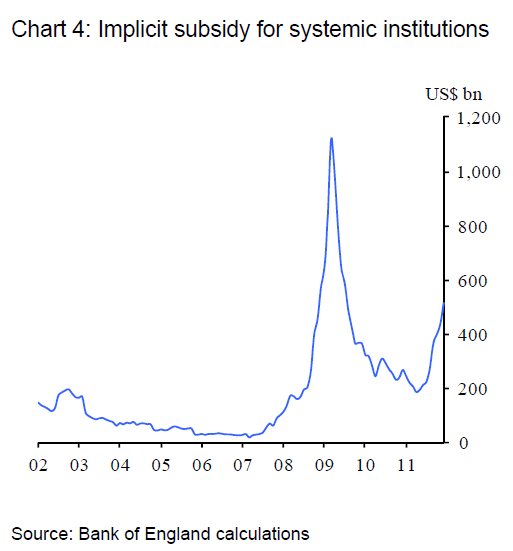 He, like many others - Vickers Report in UK, Volcker Rule in US, and Liikanen Report of the EU - believe that proposals to ring-fence economically crucial activities, like deposits and payments, from riskier trading and investment banking activities are not likely to have the desired stabilizing effect. They point to the complex nature of these activities and the difficulty of regulators being able to enforce safeguards and restrictions. In the circumstances, they argue that nothing short of complete segregation of the two retail and commercial banking and investment banking activities would suffice. They also advocate overall assets-capital ratio, far higher than the 3% suggested by the Basel III Committee, for deposit taking financial institutions.

However, there are others like Simon Johnson (also here), who argue that even the re-introduction of the Glass-Steagall Act will not suffice and call for an end to universal banking. They feel that the only way out is to break up the TBTF institutions, even arguing that the social and private benefits of TBTF banks are illusory. Rejecting the findings of certain studies that there are scale economies associated with banks, Andrew Haldane says,

But this finding is based on estimates of banks’ funding costs which take no account of the implicit subsidy associated with too-big-to-fail. Removing this subsidy raises banks’ funding costs, lowers estimates of bank value-added and thereby reduces measured economies of scale. Once an allowance is made for the implicit subsidy, the picture changes dramatically. There is no longer evidence of economies of scale at bank sizes above $100 billion. If anything, there is now evidence of diseconomies which rise with bank size, consistent with big banks becoming “too big to manage”. 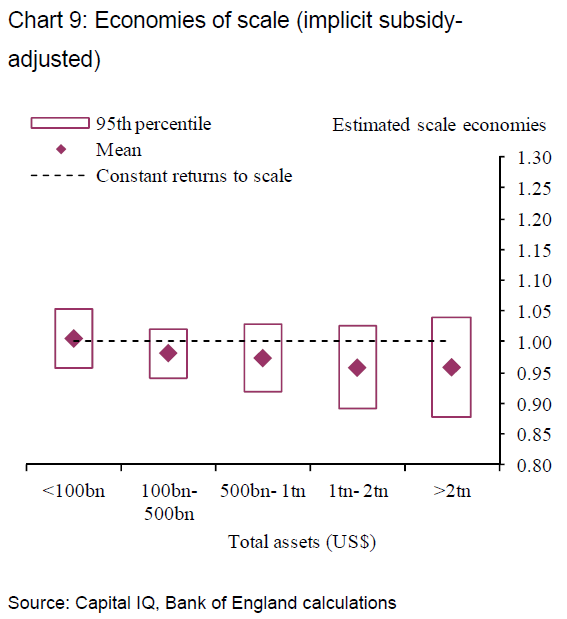 Former Citigroup Chief Executive Sanford Weill too recently called for separating investment banking from deposit taking banking. Haldane has been among those suggesting an overall cap on bank size as a share of GDP.

An IMF study finds that the overall funding cost advantage of systemically important financial institutions (SIFIs) was 80 basis points in 2009. Another study by New York Fed finds that the five largest US banks paid on average a third of a percentage point less on top rated debt than smaller rivals.
Posted by Urbanomics at 9:29 AM