Is Bangladesh the most impressive social development story of the last two decades?

The Economist has this graphic that captures the stunning progress made by Bangladesh in improving its social indicators since 1990. The improvements in infant and maternal mortality rates, immunization, and female literacy should rank among the best improvements achieved by any large sized country in such a short period of time. The contrast with India, which experienced a quadrupling of its percapita income in the same period, but achieved far less progress with social indicators, is instructive. 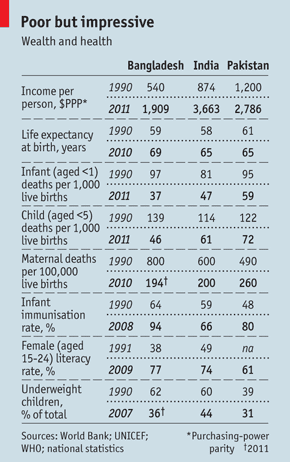 The Economist is spot on in its assessment,


The most dramatic period of improvement in human health in history is often taken to be that of late-19th-century Japan, during the remarkable modernisation of the Meiji transition. Bangladesh’s record on child and maternal mortality has been comparable in scale.

This is a very impressive achievement, especially given that Bangladesh with a population of more than 150 million is no small country. The fact that it was achieved without proportionate improvements in income levels and alongside extreme poverty runs contrary to much of mainstream thinking that social development follows economic growth.

The Economist points to the role of NGOs, in particular the iconic NGO BRAC (Bangladesh Rehabilitation Assistance Committee) in Bangladesh's progress,


The real magic of Bangladesh, though, was not microfinance but BRAC — and NGOs more generally. The government of Bangladesh has been unusually friendly to NGOs... BRAC is now the largest NGO in the world by the number of employees and the number of people it has helped (three-quarters of all Bangladeshis have benefited in one way or another)... BRAC does practically everything. In the 1980s it sent out volunteers to every household in the country showing mothers how to mix salt, sugar and water in the right proportions to rehydrate a child suffering from diarrhoea. This probably did more to lower child mortality in the country than anything else. BRAC and the government jointly ran a huge programme to inoculate every Bangladeshi against tuberculosis. BRAC’s primary schools are a safety net for children who drop out of state schools. BRAC even has the world’s largest legal-aid programme: there are more BRAC legal centres than police stations in Bangladesh...

BRAC is a sort of chaebol (South Korean conglomerate) for social development. It began with microcredit, but found its poor clients could not sell the milk and eggs produced by the animals they had bought. So BRAC got into food processing. When it found the most destitute were too poor for micro-loans, it set up a programme which gave them animals. Now it runs dairies, a packaging business, a hybrid-seed producer, textile plants and its own shops—as well as schools for dropouts, clinics and sanitation plants.

Though the role and contribution of BRAC and other NGOs was huge, it is undeniable that such progress could not have been made without active role of the government. India, more than anyone else, has the most to learn from Bangladesh. Why has East Bengal, which is much more poorer and with a much more dysfunctional administrative system, managed to achieve so much more than West Bengal? What explains the massive differential in achievements, despite similar baseline figures, on both sides of the Indo-Bangladesh border?
Posted by Urbanomics at 10:05 AM

I am not a cynic in this case but BRAC sounds too good to be true.