Historical perspective on inflation and growth in India

In the context of Arvind Subramanian's pointer towards the role of an over-heating (and growth exceeding the potential output) economy in generating inflationary pressures in India, here is a historical perspective on GDP growth rates and various CPI and WPI inflation rates. 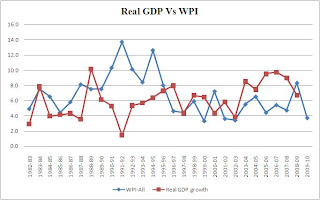 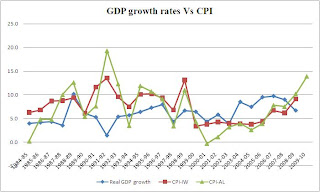 As is evident, nothing substantial can be gleaned out. Since sustained periods of high GDP growth rates are a recent trend, it is not possible to confirm the potential output-excess-causing-inflation hypothesis. The sporadic bouts of high growth rates in late-eighties and mid-nineties could not have had any over-heating effects.

However, there are unmistakable signs of an increasing trend in CPI-based inflation over the last decade, notwithstanding the blip forced due to the impact of Great Recession in the developed world. Persistence of this trend will lend greater credence to the overheating economy hypothesis.

Further dimension to this debate could come from an examination of the trends in the contribution of total factor productivity (TFP) to GDP growth. Output growth is a sum of growth in both factor accumulation and in TFP.

All available studies, and unfortunately all of them are atleast six years old, reveal unmistakable increases in both TFP growth rates and shares of TFP (in comparison to factor accumulation) in the post-reform period. Abhay Gupta has estimated that TFP growth rate increased to 2.57% to 2.95% to 3.08% from the period 1991-1995 to 1996-2000 to 2001-2004. He also finds that TFP differences have come to account for over 48% to 69% of output variation. 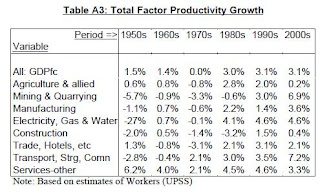 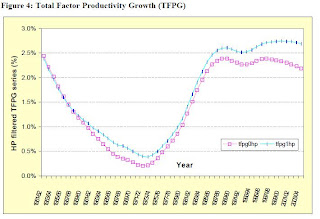 Interestingly, both studies show a plateauing trend in the TFP growth rates. Evidently, the decade-and-half (which is covered by the two studies) of post-reforms era growth may have released all the pent up inefficiencies. If this trend is any indicator, then the productivity side of the output equation may not be able to contribute much to the expansion of the production possibility frontier without further factor accumulation. Further, as TN Srinivasan has shown, India's TFP growth has closely matched that of China in recent years.

It would be also interesting to track inflation trends with the variations in the property prices, given the fairly strong links that exist between land values and construction sector and rest of the economy. Unfortunately, the only reliable indicator of property prices in the country is the National Housing Bank's Residex (semi-annual residential property price index of 15 major cities) which is only three years old.
Posted by Urbanomics at 6:43 AM

Numbers all the way

Prices will always fluctuate, mostly it goes up more than coming down. I would prefer using the real index than a percentage. That will give clearer picture of how much is the real impact directly.

Are we still using WPI for the numbers? We will better off with Consumer Price Index as the base.

If possible there must be multiple index numbers. For example a "poor_peoples_index" based on rice/wheat, dal, salt, miltk, onion, rent, kerosene and public transportation. A middle_class_index could have more items like fruits, LPG, petrol/diesel(as they have private transport), mobile and broadband tariff, train/intercity bus fare, health care etc. The numbers could be geographically measurable too. Indore may have onion at Rs 5 / kg, Kochi will have Rs 15 on the same day.

In good old days it could have been come up with such numbers. With technologies for aggregation and real time processing, it should be now very straight forward.


Inflation should not be the main point. When it moves either way, some or other will gain. We need focus on delivery mechanisms like PDS, public transport, affordable health care, Utilities like water and sewage.