The case against austerity gets stronger

The events of the last three years have repeatedly exposed the limitations of prevailing macroeconomic theories and models in both reliably predicting events and finding solutions to problems. The latest issue that has polarized economists and policymakers relates to timing the exit from the Great Recession induced expansionary policies of the past two years.

On the one hand, most developed economies (Germany looks an exception) are facing burgeoning debts, unsustainable deficits, and rapid expansion in the monetary base, all stoking fears of unleashing inflation and a long and tortuous recovery path. Contractionary policies appear to be the need of the hour. However, on the other hand, the unemployment rates are at record levels, consumer demand and investment climate are weak, battered business and household balance sheets, and credit markets are yet to recover. These macroeconomic conditions demand fiscal and monetary expansion to utilize idle resources and stimulate economic growth.

The theoretical argument of the austerians is the old Treasury View - the deficits will unleash inflation, crowd-out private borrowing, and choke medium and longer-term growth prospects. The stimulus supporters point to the large unemployment rates and monetary policy losing traction when faced with the zero-interest rate bound, and argue that a liquidity-trap induced deflation is a bigger threat.

In this context, the signs are far from encouraging. Across both the US and Europe, the fiscal stimulus and its contribution to growth is tapering off, without any signs of a sustained economic recovery on the landscape. In fact, there is a real danger of the Great Recession morphing into the Great Stall.

In the US, many economists are forecasting a slowdown in economic growth for the second half of the year, perhaps to an annual rate as low as 1.5%, on the back of weak consumer spending which accounts for 70% of economic activity. This also means that the unemployment rate is not only not likely to improve, but could worsen (the US economy needs to grow at 2.5% just to keep the unemployment rate where it is). Escaping a double-dip now looks difficult. More dangerously, a Japan-style deflation-induced depression looks a distinct possibility.

Globally too, as a recent ILO report claims, youth unemployment rate increased to 13% in 2009 from 11.9% in the last assessment in 2007. Of the 620 million young people (ages 15 to 24 in the work force), about 81 million were unemployed at the end of 2009 — the highest level in two decades of record-keeping by the organization.


Nouriel Roubini feels that "the global economy, artificially boosted since the recession of 2008-2009 by massive monetary and fiscal stimulus and financial bailouts, is headed towards a sharp slowdown this year as the effect of these measures wanes". In fact, he points to the strong possibility of a double-dip recession. What makes the situation even more dangerous is the fact that "the fundamental excesses that fueled the crisis – too much debt and leverage in the private sector (households, banks and other financial institutions, and even much of the corporate sector) – have not been addressed", and private sector de-lveraging (which just began) is now being followed by public sector de-leveraging.

The biggest immediate challenge facing the developed economies today is that of unemployment. The extent of damage inflicted to corporate and household balance sheet by the sub-prime crisis and the recession that followed means that private investment and consumption, the traditional locomotives of growth, are still some way away from getting back to business as usual. Public spending remains the only anchor to keep aggregate demand from falling further.

Most importantly, in a highly inter-twined world economy, national economic prospects are strongly dependent on the policies in other countries and fiscal contraction in a major economy has strong spill-over effects outside. David Leonhardt has an excellent graphic in the Times that shows the co-ordinated nature of the global stimulus exit, 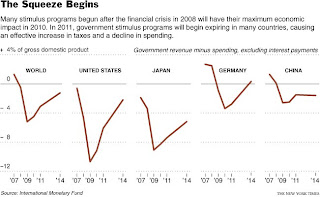 The graphic and the IMF figures show that the contractionary impact of the withdrawal will be substantial - 4.6% of GDP for the US and 2.5% of GDP for the UK, and a little more than 2% worldwide from 2009 to 2011.

Further, unlike the thirties, when the war kept up the European stimulus spending and helped the world economy even when others exited the stimulus, this time all the major economies are lock-step coupled in their exit. If everybody is exiting, where will the aggregate demand gap get filled remains the million dollar question, especially when there are serious doubts about the ability of the private sector to step in.

In this context, the austerians are obviously hoping that China (and even India) will be an anchor for the world economy, in providing the demand for both raw materials and manufacturing exports from elsewhere. However, with its economy overheating and labor unrest forcing changes in the labor markets, China's ability to act as the global engine of growth is debatable.

Amidst the controversy surrounding the issue, the US Federal Reserve's FOMC early this week, while acknowledging that the recovery had slowed, said that interest rates will stay "exceptionally low" for an "extended period" (a language the Fed has been using since March 2009). More interestingly, it voted against shrinking the Fed’s unusually expansive balance sheet ($2.054 trillion on 4/8/2010) by "reinvesting principal payments from agency debt and agency mortgage-backed securities in longer-term Treasury securities". The Fed hopes that this action may put downward pressure on long-term interest rates and stimulate borrowing by keeping rates low for the foreseeable future. 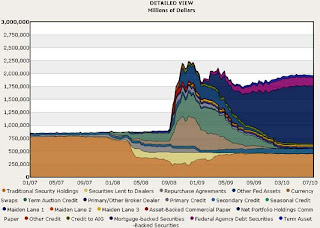 From January 2009 to March 2010, the Fed bought $1.25 trillion in mortgage-backed securities and about $175 billion in debt owed by government agencies, primarily the housing finance entities Fannie Mae and Freddie Mac. The Fed had planned to allow the size of that portfolio to shrink gradually as the securities matured or the debts were prepaid. In March, the Federal Reserve Bank of New York estimated that at least $200 billion of the mortgage-related securities and debt would mature or be prepaid by the end of 2011. Another option available to the Fed is to lower the interest rate (now 0.25 percent) it pays on the roughly $1 trillion in reserves that banks hold at the Fed.

This decision on continuing with monetary accommodation follows recent decisions to extend unemployment benefits over and above the 26 weeks to upto 99 weeks and aid to school districts and states to prevent large-scale layoffs of teachers and public employees. The first would cost about $18 bn, while the second will cost $26 bn. The long-term fiscal impact of these two decisions are marginal, whereas they would have considerable immediate impact, especially in cushioning the jobless and protecting jobs. Taken together, these are tentative baby steps towards continuing some level of fiscal and monetary accommodation in the light of the bleak economic prospects.

Faced with such difficult circumstances, economic policy-making has to choose the lesser evil. Given the sharp decline in the labor market and extent of damage caused to business and household balance sheets, contractionary policies are only likely to push the economy further down the abyss into a possible depression. Fiscal and monetary expansion is therefore the only choice. Even with expansion, it has to be hoped that recovery will be fast and sustained enough to provide adequate stimulus to drive the economy back up the recovery slope.

Update 1 (27/8/2010)
Arjun Jayadev and Mike Konczal examined 26 instances of deficit reductions during among OECD countries between 1970-2007, and found that countries historically do not cut their deficits in a slump, instead addressing these problems during a non-recessionary time; when countries cut in a slump, it often results in lower growth and/or higher debt-to-GDP ratios; there is no episode in which a country facing the same circumstances as the United States (recent recession, low interest rates, high
unemployment) has cut its deficit and succeeded in reducing its debt through growth; there is little evidence that cutting the federal deficit in the short-term, under the conditions the United States currently faces, would improve the country’s prospects.

Ireland has for sometime been the poster child for Washington Consensus policies. It had one of the bigest real estate bubbles and resultant banking crisis - Ireland’s three main banks built up loans and investments by 2008 that were three times the size of the national economy. When the crisis hit, it followed the same policies that US Treasury adopted - guaranteed all the liabilities of banks, injected government funds to keep these financial institutions afloat; and bought the most worthless assets from banks, paying them government bonds in return. On the fiscal side, it cut public wages, cut public expenditures, reduced the budget deficit to restore confidence in the markets.

Despite all this, Ireland is now being seen as the next Greece, and its CDS spreads have been rising.
Posted by Urbanomics at 6:30 AM