The chips and Science Act, a $280bn effort to shore up America’s microchips industry... the administration eventually compromised enough to overcome the resistance of Joe Manchin of West Virginia, often the swing Democrat in a 50-50 Senate, to pass a more modest, inaptly named Inflation Reduction Act, promising spending of $369bn over a decade. Its climate spending will be the most substantial in American history. Together with an infrastructure package passed in November 2021, the trio of bills will make for annual spending of nearly $100bn on industrial policy, by one reckoning. America could end up spending more, as a share of GDP, on industrial policy than unabashed champions of the practice such as France, Germany and Japan.

2. How broad-based is inflation across OECD countries? The graphic below points to the share of items in each country's inflation basket whose prices have risen by more than 2% in the past year. 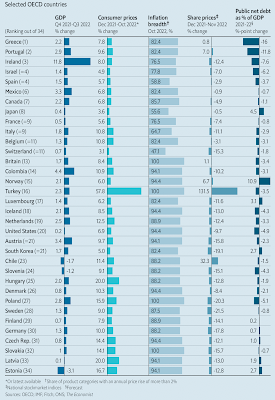 3. Scott Galloway has a reality check on the new Gods of Technology,

As search engines and iPhones replace mythical and spiritual beings as our sources of truth, our worship shifts to the gods responsible — the wealthiest person in tech has a 1 in 3 chance of being Time’s Person of the Year. Our new gods: Bill Gates, Steve Jobs, Larry and Sergey, Elon Musk, Elizabeth Holmes, Sam Bankman-Fried... Our gross, nonsensical adoration of tech innovators may have peaked. It’s been a tough couple of months for the Church of Technology: Elizabeth Holmes was sentenced to 11 years, and her colleague to 13 years; Nikola founder Trevor Milton was convicted of fraud; Celsius Network went bankrupt and faces federal investigations; and SBF’s Oops I Did it Again apology tour was cut short due to an outbreak of law.

I hope a fresh round of bankruptcies, margin calls, and orange jumpsuits dethrones our modern-day gods and sobers up the media, the public, and elected leaders who worship them. I’m optimistic these abusers will not just be reassigned to different parishes, but their close-up will illuminate the importance of regulation, trust, and independent boards. We may even realize the people responsible for prosecuting fraudulent actors, maintaining backstops on savings accounts, and writing laws are the people who are really on y(our) side.

And on the announcement of Elon Musk as Time Person of the Year,

Confirmation that our idolatry of innovators is worsening, as we increasingly treat billionaire tech founders not as influencers or even heroes, but gods whose bigotry and idiocy are just more genius waiting to be revealed.

4. The US Clean Water Act 1972 is celebrating its half-century.

Fifty years ago, Congress voted to override President Richard Nixon’s veto of the Clean Water Act. It has proved to be one of the most transformative environmental laws ever enacted. At the time of the law’s passage, hundreds of millions of gallons of raw sewage was dumped by New York City into the Hudson River every day. This filth was compounded by industrial contaminants emptied into the river along much of its length. The catch basin for all of this was New York Harbor, which resembled an open sewer. At its worst, 10 feet of raw human waste blanketed portions of the harbor bottom, and certain reaches held little or no oxygen to sustain the life of its fishery. Trash floated among oil slicks.
Health advisories against eating fish from the Hudson remain, but its ecology has largely recovered, thanks to the law, which imposed strict regulations on what could be discharged into the water by sewage treatment plants, factories and other sources of pollution. Today people swim in organized events in New York Harbor, which would have been unthinkable in 1972 when the law was passed. Across the country, billions of dollars were also spent to construct and improve sewage treatment plants, leading to recoveries of other urban waterways. Cleaner water has made the harbor far more hospitable, and other steps have helped to rebuild life there, like fishing restrictions and the removal of some dams on tributaries in the Hudson River watershed.

The act regulated so-called point-source pollution, requiring factories and towns to stop direct discharges or remediate them in some way. It provided grants for sewage treatment plants. And it established water quality standards that, when achieved, were intended to make lakes and streams safe for fishing and swimming, at the same time protecting drinking water supplies.

This draws attention to the importance of regulation, even if not very well implemented, in addressing negative externalities.

5. A measure of the credibility of budgets is the difference between the budget estimates and the actual realisation. States typically have the incentive to boost their revenues and under-estimate their expenditures so as to ensure that their fiscal deficits remain within the FRBM limit.
As the latest PRS report on state government finances, there are large variations between the budget estimates and the actuals. The average shortfall in revenue receipts was 10% over the 2015-16 to 2019-20 period.

The average shortfall in total expenditure over the same period was 9%.

While the average shortfall in revenue expenditure was 8%, that in capital expenditure was a disturbing 17%.
6. Bloomberg points to this database on corporate settlements in the US whereby corporates pay large fines to settle with the prosecutors and DoJ on all kinds of violations ranging from tax evasion to market manipulation to money laundering. 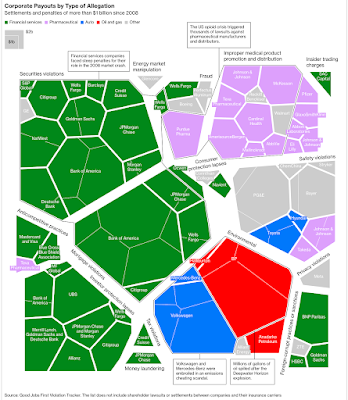 7. Private sector companies far outperformed public sector ones in the Indian stock markets over the past decade. 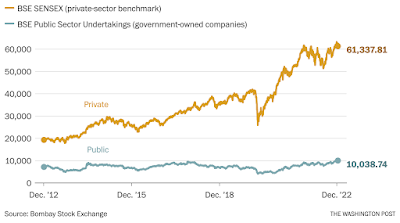 Google advertising accounted for almost four-fifths of Alphabet’s revenue in the last quarter... Google Search has no real competitors... The prevalence of Google’s Chrome browser and the fact that it pays Apple to be the default search engine give it a huge advantage.

9. FT has an article on Top Glove the Malaysian rubber gloves manufacturer which is battling corruption and poor labour practices allegations in western markets.

Until the Covid-19 pandemic, the group had quietly led a national industry that produced up to two-thirds of the world’s rubber gloves. Top Glove alone claims a 26 per cent market share.

The controversies apart, rubber gloves industry in Malaysia, the world's largest natural rubber producer, is a good example of capturing value domestically by leveraging local natural resources to establish leadership in the global manufacturing industry. Top Glove is an example that resource industries in other developing countries should look closely.

10. Ruchir Sharma has some predictions for 2023 - end of a long period of dollar strength; rise of rest of world financial markets relative to the US; beginning of the end of the Big Tech dominance; the return of Japanese economy; manufacturers relocating away from China etc. This is an outstanding graphic. 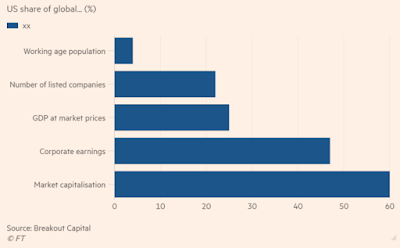 Since the second world war, the US stock market has tended to outperform the ROW one decade, then trail behind the next. The 1950s, ’70s and 2000s were great decades for investing outside the US. In the boom of the 2010s, the value of the US stock market expanded, reaching 60 per cent of the global total in 2021, a full 15 per cent above its long-term average.

11. The Lina Khan led US Federal Trade Commission (FTC) has unveiled a rule to block companies from limiting their employees' ability to work for a rival.

The proposed rule would ban provisions of labor contracts known as noncompete agreements, which prevent workers from leaving for a competitor or starting a competing business for months or years after their employment, often within a certain geographic area. The agreements have applied to workers as varied as sandwich makers, hairstylists, doctors and software engineers... The commission’s proposal appears to address this issue by requiring employers to withdraw existing noncompetes and to inform workers that they no longer apply. The proposal would also make it illegal for an employer to enter into a noncompete with a worker or to try to do so, or to suggest that a worker is bound by a noncompete when he or she is not. The proposal covers not just employees but also independent contractors, interns, volunteers and other workers.

Non-competes are widely used in the US and its effects not benign,

Studies show that noncompetes, which appear to directly affect roughly 20 percent to 45 percent of U.S. workers in the private sector, hold down pay because job switching is one of the more reliable ways of securing a raise. Many economists believe they help explain why pay for middle-income workers has stagnated in recent decades. Other studies show that noncompetes protect established companies from start-ups, reducing competition within industries. The arrangements may also harm productivity by making it hard for companies to hire workers who best fit their needs... The agency estimated that the rule could increase wages by nearly $300 billion a year across the economy... Evan Starr, an economist at the University of Maryland who has studied noncompetes, said noncompetes appeared to lower wages both for workers directly covered by them and for other workers, partly by making the hiring process more costly for employers, who must spend time figuring out whom they can hire and whom they can’t.
He pointed to research showing that wages tended to be higher in states that restrict noncompetes. One study found that wages for newly hired tech workers in Hawaii increased by about 4 percent after the state banned noncompetes for those workers. In Oregon, where new noncompetes became unenforceable for low-wage workers in 2008, the change appeared to raise the wages of hourly workers by 2 percent to 3 percent. Although noncompetes appear to be more common among more highly paid and more educated workers, many companies have used them for low-wage hourly workers and even interns. About half of states significantly constrain the use of noncompetes, and a small number have deemed them largely unenforceable, including California.

Posted by Urbanomics at 8:06 PM