Ruchir Sharma has some less discussed reality checks on China and the world economy.

He points to a possible decoupling of China and other emerging markets.

The correlation between gross domestic product growth in China and other emerging markets fell since 2015 from nearly perfect (over 0.9) to barely visible (under 0.2). In the second quarter this year, China grew significantly slower than other emerging markets for the first time in three decades, which may be a sign of things to come. 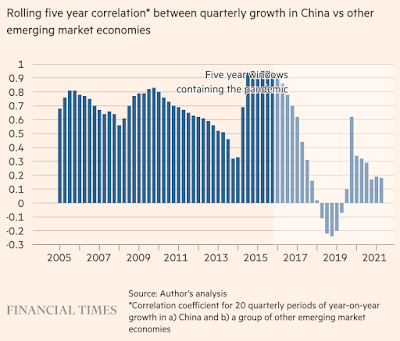 China has been turning inwards, and nothing captures it better than the collapse in its exports, which have fallen from above 35% of GDP before 2010 to less than 20% today. 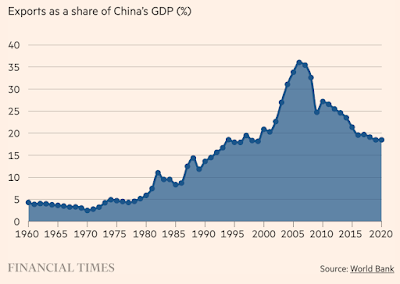 These trends also mean that China's importance for the world economy, while still high, is declining.

China accounted for about 35 per cent of global GDP growth in the years before the pandemic, but that share plummeted in 2020 and is now about 25 per cent.

Finally, The Economist has a stunning graphic that captures the starkly contrasting stock market fortunes of US and Chinese technology giants. Posted by Urbanomics at 9:32 AM

Email ThisBlogThis!Share to TwitterShare to FacebookShare to Pinterest
Labels: China